What the Recent Rally Means for the Fed’s Monetary Policy

Is the Fed about to “pivot” on monetary policy?

Yes it is. But not in the way many investors expect. And a lot sooner than many think.

Because the stock market had a banner summer – one of the best on record – jumping 17% from mid-June to mid-August. In addition, investors bid up bond prices during this time, pushing yields lower.

And that’s exactly what Federal Reserve Chairman Jay Powell and his colleagues didn’t want. In fact, it’s quite the opposite of what they had in mind.

When stocks rise, people feel wealthier and spend more. That only exacerbates consumer inflation, which is driven by too much demand and not enough supply of goods and services.

Plus, when bond yields fall, it’s easier for individuals and companies to borrow, further stoking demand.

And that combination of rising stock prices and falling yields made financial conditions easier, exactly when the Fed was attempting to make them tighter. 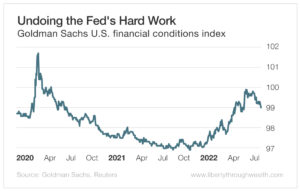 And much of that two-month market rally was driven by the idea that the economy is slowing. We just had two consecutive quarters of negative GDP growth. And investors assumed the slowing economy would force the Fed to stop raising rates at the end of this year – and pivot to lowering them by mid-2023.

So markets, as they often do, were responding more to changing expectations about what the Fed will do than to actual economic data and fundamentals.

In the immortal words of former Fed Chairman William McChesney Martin, the Fed’s job is to take away the punch bowl just as the party is getting started.

More accurately, he said that the Federal Reserve “is in the position of the chaperone who has ordered the punch bowl removed just when the party was really warming up.”

Yet this summer, investors refused to stop drinking the punch, and the party raged on.

And Powell has had enough of it.

That’s why he’s about to pivot hard. But not toward lower rates.

This week (August 25-27), Powell and the Fed’s top brass, plus central bankers from around the globe, will convene in Jackson Hole, Wyoming, for their Economic Policy Symposium.

The purpose of this annual meeting is to discuss the global economy and trends in inflation, interest rates and central banking.

But this year the Fed will use it as a bully pulpit to talk tough on inflation.

Expect Powell to say that the Fed will continue to raise rates aggressively, that it will not change course if the market drops or unemployment rises, and that it will not be moving to a neutral or dovish stance anytime soon.

Powell’s keynote address at 10 a.m. ET Friday – when he’s expected to sound extremely “hawkish” on monetary policy – could move markets dramatically, depending on just how tough his talk comes across.

The Fed is clearly behind the ball on tackling inflation. As I pointed out earlier this month, it’s quickly running out of time to wring inflation out of the system before that becomes embedded in consumers’ expectations.

It’s also not clear that the Fed has the requisite skills and backbone to beat back rising prices.

So Powell’s speech on Friday will be critical to convincing markets that, yes, he’s serious about ending this party.

Is he up to the task? We’ll have to wait and see.

The Devil Is in the Details on the Global Prosperity Index