Four Themes That Will Dominate 2023

You’re in for a real treat today!

Alexander Green has had an impeccable track record with his recommendations – and predictions – in the Forecast Issues of his monthly newsletter, The Oxford Communiqué.

In the 2022 Forecast Issue, Alex wrote, “I also see a major trend emerging. Value stocks are beginning to outstrip growth stocks. I fully expect this trend to accelerate in 2022.”

We all know what happened next… 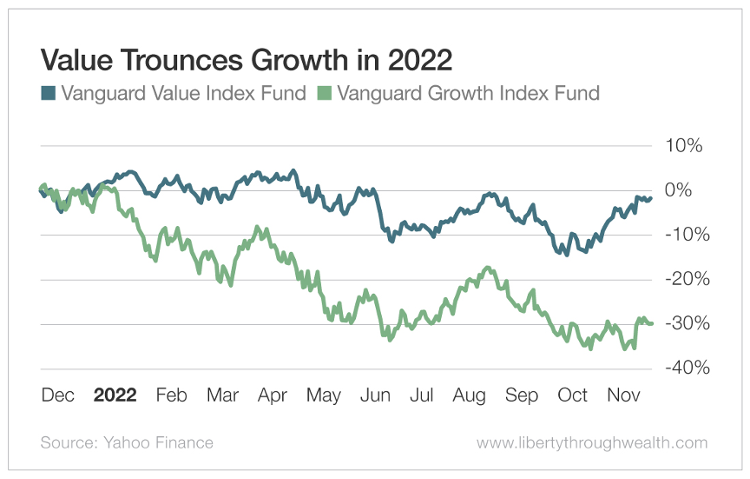 At the time, the company was trading at less than nine times earnings.

That’s a 62 percentage point difference in one year!

Since that issue was published in December 2020, the position is up around 33%. Over the same period, the broader market is up only around 2.5%.

One thing is clear: When Alex makes a bold prediction in his Annual Forecast Issue, it pays to pay attention.

Typically, the content of the Forecast Issue is reserved exclusively for subscribers to Alex’s newsletter, The Oxford Communiqué. But today, we’re pulling back the curtain…

Below, you’ll find Senior Market Expert Matt Benjamin’s article from the 2023 Annual Forecast Issue of The Oxford Communiqué, published just a few weeks ago. In the article, Matt details four important themes that will dominate 2023.

Many years ago, I wrote about the economy and financial markets for weekly news magazine U.S. News & World Report. We routinely brainstormed cover stories that would fly off newsstand racks.

Two themes always sold well: stories about 401(k) plans and features about the life of Jesus.

One year when the markets were down sharply, a humorous editor suggested a hybrid theme that would surely sell like hotcakes: “Jesus, what happened to my 401(k)??”

That, basically, is the story of 2022 – a year that has been anything but kind to investors.

Supply shocks and too much economic stimulus in the U.S. (and many other nations) led to sudden, soaring inflation. And the Federal Reserve neither expected it nor was temperamentally prepared to deal with it.

The frantic efforts of Fed Chairman Jerome Powell and his colleagues to catch up to inflation with a nearly unprecedented series of outsize interest rate hikes spooked financial markets, sending both stock and bond prices into a tailspin.

Stocks and bonds are both down more than 15% this year as I write. If things don’t improve, 2022 will be the sixth time in the past 94 years that both have finished the year down by double digits.

But good news! The stars may be aligning for a very good 2023 for investors…

Not a Soft Landing… but Not a Crash Either

In the new year, we will start to see disinflation take hold as demand falls and supply ramps back up.

The Fed’s unprecedented rate hikes will grip consumers and businesses – causing them to spend and hire less.

And Americans will finally run through all the excess savings they’ve had on hand since the massive stimulus effort by the federal government, which will further depress demand.

At the same time, the supply shocks that have limited the amount of goods and services available – which is the other half of the inflation equation – will largely conclude in 2023.

So expect inflation to continue to drop through 2023, dipping to around 4% by the second half of the year. While that’s still twice the Fed’s (somewhat arbitrary) 2% target, it’s low enough for the central bank to pivot to a neutral stance well before midyear.

Thus, while economic growth will certainly slow, the U.S. will likely avoid a recession in 2023.

That won’t deliver the holy grail the Fed wants – a soft landing – but it won’t be a crash landing for the economy either. 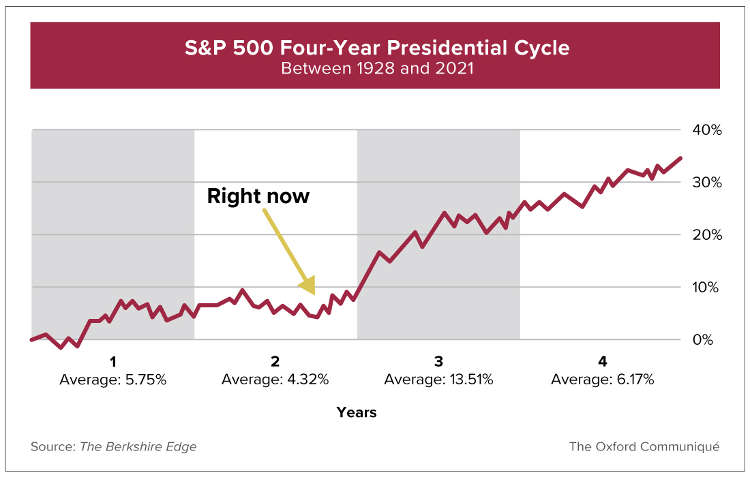 Since 1939, there has been only one down year for the Dow Jones Industrial Average in the third year of a presidential term.

Typically, a bear market occurs in the first or second year of each term, and a bull market resumes right around midterms, delivering strong gains from the elections through the end of the following year.

And the third year of presidential terms in particular – the year we’re about to begin – has been the best by far, with a 10.4% average gain in the Dow Jones Industrial Average.

By comparison, the fourth year had a 6% average gain, the second year a 4% gain and the first year a 3% gain.

So far, this pattern is holding. And the midterm elections delivered a split government that is giving markets confidence that further inflation-igniting stimulus is off the table.

The kind of economic recovery we’ll see should be good for one investment in particular: small cap stocks.

Smaller companies tend to be more focused on services than goods, more domestic and less dependent on international markets. And consider that…

Best of all, small caps are trading at a roughly 40% discount to large caps, according to Yardeni Research. The S&P 500 (large cap) price-to-earnings (P/E) ratio is currently above 17, while the S&P 600 (small cap) P/E ratio is closer to 12.

Small caps may close that gap early in 2023 too, considering that small cap stocks tend to outperform large caps in January.

I’m sure you’ve heard about the “January effect.”

Why does this happen?

That’s not exactly clear. Market researchers who have studied the January effect think that year-end bonuses and dividends give investors extra money to invest, and they often put it into less-known and smaller stocks to start the new year.

In addition, some investors may also sell stocks in December to claim a capital loss on taxes and then reinvest the money into smaller stocks with greater growth potential.

Whatever the reason, the January effect is statistically significant and will give small caps an early head start on a big year.

Finally, one larger development I’m expecting is that the prophets of American decline will continue to be proved wrong in 2023.

As a result, the U.S.-led international order that was established shortly after World War II suddenly looks appealing to many nations again.

The stability, open markets and rules-based institutions of the current world order are good for peace, trade and economic growth… all conditions that are great for investors too.

I expect that trend to also continue through 2023.

Here’s to a peaceful and prosperous new year!

Why Warren Buffett Is Smiling Ear to Ear

How the Rich Get Richer… and You Can...