Are you crypto curious?

If so, you’re hardly alone. I have quite a few successful, educated friends who own a little Bitcoin or Ethereum, though in most cases it’s an insignificant portion of their portfolio.

And I also own a tiny amount of Bitcoin, though just for fun (and it’s not more than I’m willing to lose in Vegas over a weekend, which is not a lot).

If you do happen to be crypto curious, the events of 2022 might just have cured you of this unfortunate affliction.

2022 was the year crypto prices cratered and we saw the fraud, self-dealing and deception behind this novel asset class.

Maybe not. The Hong Kong company that launched Tether claims it holds a dollar in reserve for every Tether token issued. But that might not be the case. The U.S. Commodity Futures Trading Commission found that for significant time periods, Tether failed to hold sufficient fiat currency reserves to back the crypto.

Overall, the total value of all crypto plunged last year, from about $2.5 trillion to about $500 billion, according to Bloomberg News.

Meaning crypto investors lost a whopping 80% of their crypto wealth during the year.

Tom Brady and his ex-wife, Gisele Bündchen, were among the biggest losers. The NFL legend owned more than 1.1 million shares in the now-bankrupt FTX cryptocurrency exchange. Forbes estimates that at their peak, those shares were worth $45 million (Tom) and $25 million (Gisele).

(Remember that Tom and Gisele ad for FTX? The two superstars can probably afford the loss – they may even have received the FTX shares for next to nothing. But how about that short-order cook in the ad who quit his job to “get in” on FTX? I’m guessing he wants his old job back.)

FTX was hardly the only spectacular crypto implosion of the past year.

Last week, Genesis Global filed for bankruptcy and apparently owes its creditors some $3 billion that it doesn’t have.

Crypto lender Celsius Network went under last July. Worse, last week a bankruptcy judge ruled that people who had accounts at Celsius didn’t actually own those accounts. That is about as far as you can get from an FDIC-insured savings account at the local bank.

There were myriad other crypto bankruptcies, crashes and computer hacks that devastated cryptocurrencies, crypto firms and investors last year. I don’t have space to cover even a tenth of them here.

Store of Value or Currency?

On top of these unfortunate events, the question I’ve been asking for several years about crypto remains unanswered: Are cryptocurrencies like Bitcoin actual currencies or merely stores of value?

That is, can we use them to actually buy and sell things? Or are they just an investment, akin to a stock or a work of art?

Well, they’re not currencies as far as I can tell. Because there’s not much you can buy with them.

Sure, we’ve all heard that carmaker Tesla (Nasdaq: TSLA) accepted payment in Bitcoin. So then, how much did a Tesla cost in Bitcoin?

Bad question. Tesla vehicles were always priced in dollars or other fiat currencies. So if in March 2021 you wanted to buy a Tesla Model S, you merely paid in the Bitcoin equivalent of the dollar price.

The same went for the Dallas Mavericks NBA team. In an attempt to endorse Bitcoin, the team announced in 2019 that it would accept Bitcoin for both game tickets and merchandise. But if you wanted a Mavs jersey or hat at the arena, you had to get the Bitcoin-dollar spot exchange rate and then pay the Bitcoin equivalent of what the item cost in dollars.

Apparently, Mavericks owner Mark Cuban liked Bitcoin but was unwilling to risk his own dollars on Bitcoin’s crazy volatility. Some endorsement!

So really, Bitcoin and its crypto brethren are more of a store of value. So the idea is to invest a small amount in some tokens today and reap huge rewards when they eventually overtake the dollar, the yen and the euro. Except, well, see above about the value of Bitcoin et al. last year…

Alternative to Other Asset Classes (Like Stocks and Bonds)

Finally, Bitcoin and other crypto were supposed to be a nice addition to a portfolio because, as a unique investment that’s not associated with any other asset class, they would add diversity to a portfolio.

Except that didn’t work out either. For the last several years, cryptocurrencies have moved in tandem with tech stocks. 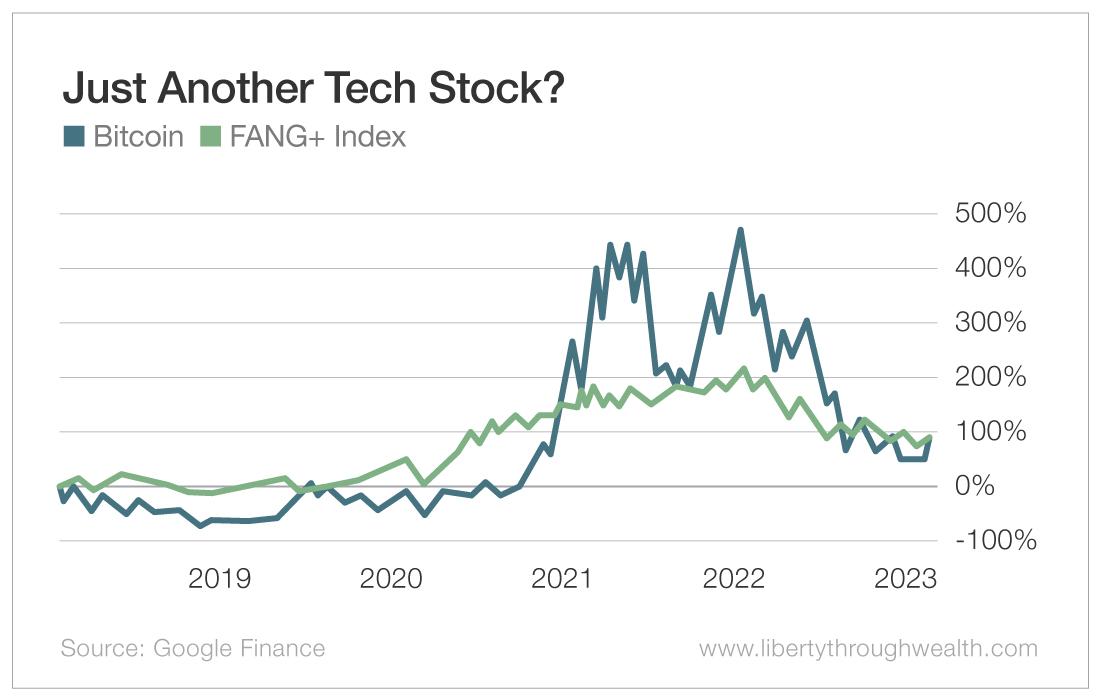 The Bitcoin price seems to track the movement of big tech stocks, though in a more volatile and exaggerated way. That makes it the rough equivalent of a highly leveraged FANG ETF – just what every investor needs in their portfolio!

So there you have it. The many benefits of crypto, laid out for all to see.