Editor’s Note: As the U.S. stock market continues to test investors’ fortitude, you may be wondering where you should turn to ensure a wealthy retirement.

In today’s article, Nicholas Vardy explains how investing in commodities today could pay off big-time over the next decade.

But Alexander Green offers another suggestion for readers: one stock that could be the cornerstone of your retirement.

In this video, he uncovers a brand-new investment opportunity with REAL cutting-edge technology.

Click here to unveil the details of this relatively undiscovered opportunity.

Investors are asking themselves…

Where can I invest to generate the kinds of returns that will ensure a secure retirement?

To be clear, I’m not a doom-and-gloomer.

And I continue to believe that the stock market will generate its historical average of about 10% per year over the long term.

But I also know my financial history…

And that history tells me that stock markets tend to stagnate during inflationary periods (like the 1970s). That stagnation can last a long time.

Few investors on Wall Street remember that the Dow Jones Industrial Average traded at around 800 in 1982.

And for future retirees now in their 50s, that’s the kind of stagnation they cannot afford.

As it turns out, one group of investors made a fortune in the inflationary 1970s when the environment was very similar to today’s.

One of those traders was Jim Rogers.

As co-founder of the Quantum Fund with George Soros, Rogers helped investors make over 4,000% returns from 1970 to 1980.

And yes, that was when the Dow Jones Industrial Average was flat.

What was their secret? Simple…

Rogers credits the fund’s success to their willingness to invest in all asset classes – foremost among them commodities.

A Primer on Commodities

Commodities are the raw materials that make up the essentials of our everyday lives.

Every time you walk into the supermarket or the mall, you’re surrounded by commodities that have traveled around the world to get there.

The same applies when you get into your car or truck – or walk into an office building.

As well as the 80 or so other commodities listed in the traders’ bible, The CRB Commodity Yearbook by the Commodity Research Bureau.

And each of these commodities offers trading opportunities to savvy traders who focus on them.

As Rogers puts it in his book Hot Commodities: How Anyone Can Invest Profitably in the World’s Best Market…

Admittedly, I have often relished buying a great company cheap and holding it long term; to be sure, finding the next GE, Microsoft or Amgen can be an intellectual as well as a profitable adventure. But let me assure you that when the price of sugar futures went from 1.4 cents to 66 cents between 1966 and 1974, those holding cheap sugar had a whole lot of fun watching sugar rise more than 45 times.

An Investment Case for Commodities

Amid the world’s “Everything Bubble,” commodities are the only cheap asset class.

And with inflation rearing its ugly head, commodities have just embarked on what promises to be at least a decadelong bull market.

It turns out that commodities move in 12-to-16-year supercycles, almost like clockwork.

Two studies from Legg Mason confirmed that for the past 130 years, “Stocks and commodities have alternated leadership in regular cycles averaging 18 years.” (This can be seen in the graphic below.) 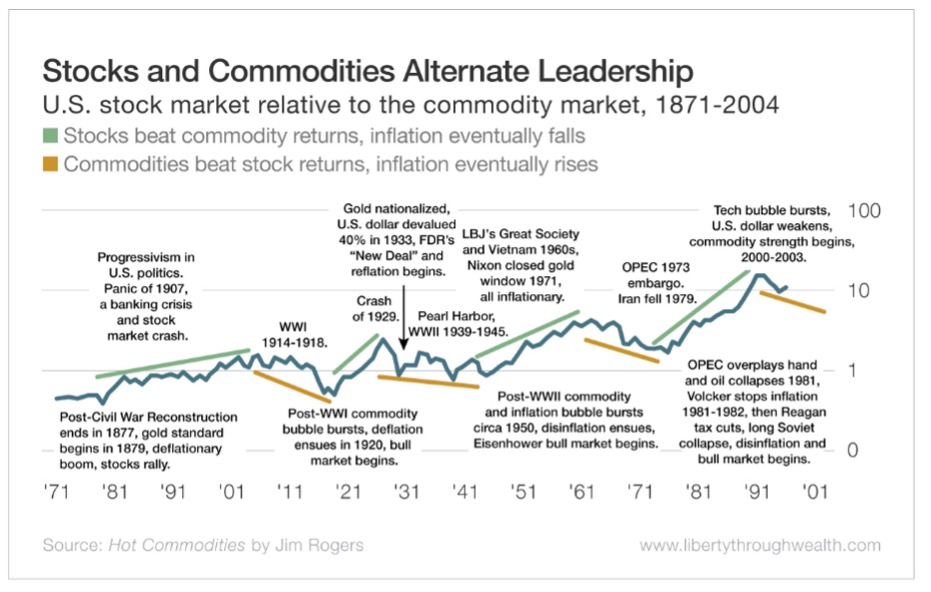 As Rogers puts it in Hot Commodities…

It will be a few years before the talking heads on CNBC start raving about commodities.

And, as always, they will have been late to the party. 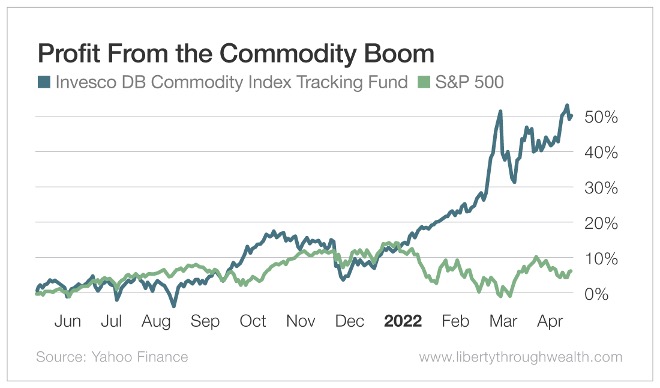 Note how commodities took off in only January 2022 – just three months ago.

Unlike in the 1970s, today you can profit from the commodity boom with the click of a mouse.

Back in the 1970s, retail investors were excluded from the elite club of commodity investors.

Commodity investors had to pay tens of thousands of dollars for seats on the Chicago Mercantile Exchange.

These include ETFs for Australia, Canada and Brazil – the iShares MSCI Brazil ETF (NYSE: EWZ) is up by double digits since I wrote about it on February 24.

Diversify your portfolio away from U.S. stocks and toward commodities.

Every investment asset class has its season.

And the next decade belongs to “hot commodities.”