“The seasoned investor buys his stocks when they are priced low, holds them for the long-pull rise and takes in-between dips and slumps in stride.” – J. Paul Getty, founder of the Getty Oil Company and author of How to Be Rich

Two weeks ago, when the market was going through a rough patch, I debated engineer-turned-investment-advisor Mike Turner at the Orlando MoneyShow. The session was called “Which Is Better: Buy and Hold or Market Timing?”

The timing couldn’t have been better. We were witnessing 1,000-point drops in the Dow, and attendees were anxious.

Turner even had a session called “How to Know EXACTLY When to Buy and When to Sell.” His sessions were packed.

Engineers are always trying to apply their mechanical expertise to the markets.

Once they think they’ve figured out Wall Street’s “system,” they’ll be convinced they’ve found a guaranteed way to beat the market.

As I’m an economist, my approach is entirely subjective: All prices in the stock market are determined by human (not machine) action and are therefore never random. Even computer-generated buy and sell programs are designed by humans.

As Sir Isaac Newton put it, “I can calculate the motion of heavenly bodies, but not the madness of people.”

Granted, investors often engage in herd-like trends… But every market is different, depending on the mood of the crowd.

Yes, the market repeats itself, but never in the same way.

Why “Buy and Hold” Is the Best Strategy

I showed the audience that the long-term upward trend of the U.S. stock market over time has generated 6% to 7% a year in real returns.

I firmly believe that trend will continue as long as free enterprise capitalism is practiced here.

I told them that the best investment strategy is to buy fundamentally sound stocks in growing industries at relatively low prices – and to hold them for the long term through thick and thin. 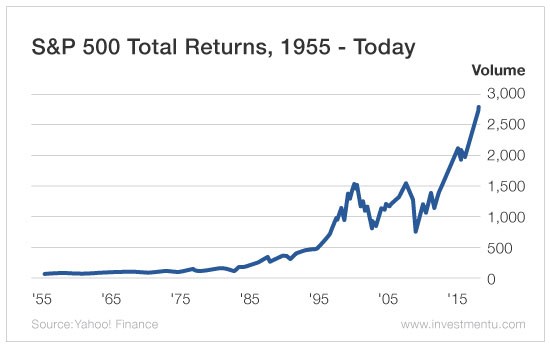 This is essentially the approach Alexander Green and other investment advisors recommend to Oxford Club Members.

To avoid major losses, The Oxford Club also strongly recommends placing a stop order 25% below the current price… and moving that trailing stop up as the stock price climbs.

I follow a similar policy in my Forecasts & Strategies newsletter, and it’s an effective way to build wealth over the long term.

The Appeal of Market Timing

But I always lose the long-term debate at the money shows.

Because investors can’t resist the idea of finding a way to avoid the treacherous downturns that occasionally destroy 50% or more of their portfolios.

Who can survive such a disaster when they’re saving for retirement? Yes, the market eventually makes a comeback, but sometimes it takes years, even decades.

Mike Turner is their prophet. His sessions are always standing room only with titles like “Grow and Protect Your Capital in Both Bull and Bear Markets.”

Fear and greed are the two biggest motivators in the stock market, and Mike Turner appeals to both. He promises that his “market guidance” strategy not only beats the market but also keeps you in cash during the severe downturns.

His method is proprietary, but he changed his program when his old system failed.

This is what often happens with technical systems – they’re objective in a subjective world and eventually fail because humans learn from their mistakes… and the patterns change.

The sophisticated program used by Nobel Prize winners to guarantee profits for Long-Term Capital Management (LTCM) in the late 1990s worked for a while – until it didn’t, causing LTCM to require a bailout by the banks.

For years, market timers used the simple 200-day moving average when the market crashed. But the problem is that the moving average triggers too many buy and sell signals during bull markets.

Investment advisor Richard Bernstein studied individual investors’ buy and sell habits from 1994 to 2014. He found the average investor made only a 4% annual return on their portfolio, compared with 10% for the S&P 500.

And remember this warning from Steve Forbes, “Everyone is a disciplined, long-term investor… until the market drops!”

That’s when you’ll need to resist the temptation to become a market timer.

P.S. My book The Maxims of Wall Street is now in its fifth edition. It’s a compilation of great sayings, proverbs and words of wisdom on investing, like the ones highlighted above. Alexander Green calls it “a classic,” and the book has been endorsed by Warren Buffett, Jack Bogle, Dennis Gartman, Richard Band, Bert Dohmen and many others. It makes a great gift. If you order directly from me, you’ll pay $20 for the first copy and $10 for each additional copy. I autograph each one and pay for shipping. If you order a whole box (32 copies), the cost is only $300 postpaid. To order, call Harold at Ensign Publishing at 1.866.254.2057 (toll-free) or go to www.miracleofamerica.com.