The founder of Boston-based investment giant GMO predicted both the dot-com bubble and the financial crisis of 2008.

Today, Grantham is worried once again.

With valuations sky-high, Grantham expects U.S. stocks to be a lousy place to make money in the coming decades.

But Grantham does expect one resource to fare unusually well – timber.

Grantham predicts timber will rise an average of 4.8% annually over the next seven years.

That sounds shockingly low, I agree…

Until you realize Grantham forecasts 4.6% annual losses for U.S. large cap stocks over the same period.

Put another way, Grantham expects timber to outperform the overall U.S. stock market by an eye-popping 9.4% per year!

No wonder Grantham has called timber the “perfect investment” for anyone with a time horizon of, say, 20 years or more.

Here’s why you should start…

Companies go out of business every day. Countries may even disappear off the map.

But trees grew through two world wars, the Great Depression, the rise and fall of the Soviet Union, 9/11, and even Donald Trump’s election.

Trees will keep growing, no matter the latest financial or political shock.

Second, unlike wheat or corn, trees don’t need to be harvested every year.

You can harvest trees when timber prices are up…

And delay harvests when prices are down.

In other words, “banking timber on the stump” helps smooth out prices and ensures against crashes.

Third, the global supply of timber – the rate of tree growth – is falling even as demand is exploding.

The world has lost the equivalent of 1,000 football fields of forests per hour for the last 25 years. That’s about 10% of the world’s wilderness.

Meanwhile, there’s been a surge of demand for timber, primarily from China.

Historically, timber has been a terrific investment.

Timber has also been a terrific investment during times of financial crisis.

During the Great Depression, timber gained 233% even as the price of stocks fell more than 70%.

So if you’re looking to protect yourself against a financial crash or inflation (or both), before you look toward gold, think about timber.

How to Invest in Timber

While investing in timber is one way to insulate yourself from stock market fluctuations, it also has its hassles.

Second, valuing assets that trade infrequently or aren’t generating cash is as much art as it is science. You never really know how much your timber’s worth until you try to sell it.

That’s why my favorite way to invest in timber is through the iShares Global Timber & Forestry ETF (Nasdaq: WOOD).

Timber is, however, a global industry. So foreign stocks account for a much more significant portion of the Timber & Forestry ETF’s portfolio than you may expect.

Technically, the ETF is also in a stable long-term uptrend and has doubled the returns of the S&P 500 over the past two years. 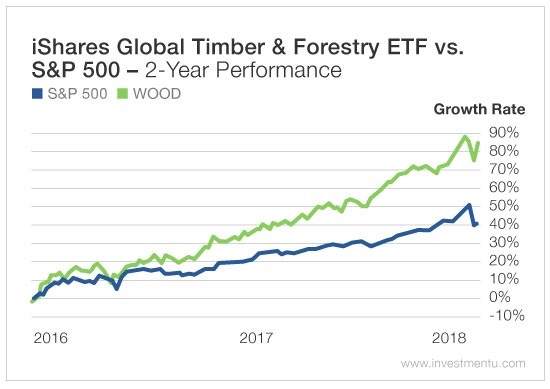 So, yes, timber is an unusual resource you may have ignored.

But the investment case for timber has rarely been stronger than it is today.

The Digital Trend Set to Transform Everything