“You pay a very high price in the stock market for a cheery consensus.”

When this particular “thing” happens, I know I will likely make a lot of money.

It’s something that happens surprisingly often.

And this “thing” has played out dozens of times in my investment career.

It has nothing to do with any access to inside information…

Or a unique insight into a company’s prospects…

In fact, this “thing” could hardly be more public.

Here’s how I define it…

Whenever a positive story about a company makes the cover of a magazine, the stock is likely to take a big hit in the coming weeks (and vice versa).

Now, the magazine cover indicator is not my idea.

In fact, even basic investment textbooks mention it.

The most famous example?

Businessweek‘s August 1979 cover story, “The Death of Equities: How Inflation Is Destroying the Stock Market.” 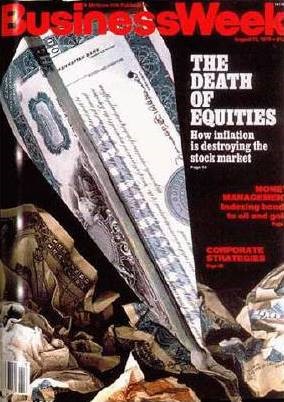 According to the article, “For better or for worse, then, the U.S. economy probably has to regard the death of equities as a near-permanent condition – reversible someday, but not soon.”

Three finance professors at the University of Richmond put the magazine cover indicator to the test.

They examined company-related headlines from stories in Businessweek, Forbes, and Fortune magazine over a 20-year period.

And whether negative stories were related to inferior future performance.

Negative stories tended to come at the start of a turnaround.

When I saw Netflix recently featured on the cover of this issue of The Economist, I knew in my bones what was coming. 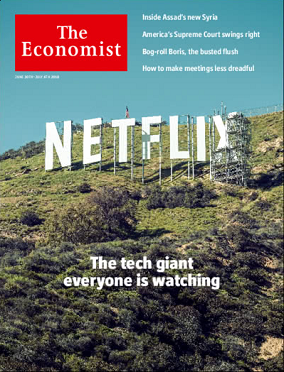 I had seen this “story” unfold dozens of times in the past.

Fast-forward to July 15 when Netflix revealed disappointing subscriber growth. The stock promptly tumbled by double-digits, opening the next day at $346.95.

That meant the stock had dropped a whopping 18% from its all-time high just three weeks earlier.

Today, the stock is still trading more than 10% below its highs.

If you are inclined to invest in a company based on a positive magazine cover story… don’t! Chances are it’s best to sit back and wait.

By the time a company makes it to the cover of a magazine, any and all good news is already reflected in the stock price.

And odds are good you’ll soon be able to buy the stock at a lower price.

Still, Not a Holy Grail

Yes, academic studies have confirmed that the magazine cover indicator is real.

And it remains one of my most reliable “informal” indicators.

Yet as it turns out, the magazine indicator can be both very right – and very wrong.

It all depends on your time frame.

In 1999, Time magazine put Amazon (Nasdaq: AMZN) founder and CEO Jeff Bezos on its “Person of the Year” cover. 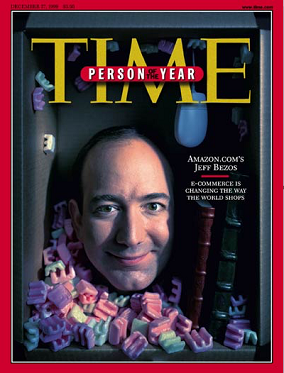 The internet bubble was at its peak.

Amazon’s stock traded as high as $113 after going public at $18 per share.

Bezos himself is worth more than $150 billion, having surpassed both Warren Buffett and Bill Gates.

So yes, you can pay a high price for a cheery consensus. And the magazine cover indicator is a terrific way to profit from going against just such a consensus.

But as the Amazon example shows, once in a (long) while, that consensus turns out to be right.

The Best Place to Secure Profits During This...