In 2015, Google stopped being “Google”… and changed its name to “Alphabet.”

Yet most investors have no idea why.

Google founder and CEO Larry Page is a longtime admirer of Warren Buffett. In a 2014 interview, Larry Page revealed that if there was a person with the qualities to lead Google into the future, it was Warren Buffett.

Fast-forward one year. Google restructured itself into a collection of companies under the new Alphabet umbrella, modeling itself on Berkshire Hathaway.

Today, Alphabet presides over Google (the company’s cash cow) and dozens of other independent operations.

To efficiently allocate the cash produced by Google’s advertising business.

Three years after Google’s transformation into Alphabet, the question remains…

Is Alphabet the 21st-century version of Berkshire Hathaway?

Birds of a Feather?

Alphabet and Berkshire are surprisingly similar…

Each has a core business that throws off cash, allowing it to fund other ventures.

For Google, that core business is internet advertising.

After Berkshire started out as an insurance company, Buffett transformed it into an investment holding company.

After its humble beginnings as a Stanford student project (its first URL was google.stanford.edu), Google has become the most popular search engine on the planet.

And cash from its advertising business has funded Alphabet’s other investments.

Today, Alphabet’s investments include everything from YouTube to self-driving cars to cloud computing. The company has also become the most active corporate venture capital investor in the world, with 103 deals made last year.

Swinging at the Fat Pitch

Despite Alphabet’s admiration for Buffett, the two companies’ investment philosophies are vastly different.

Think of it as “old school” versus “new school.”

It invests the cash (or “float”) of the insurance business into the stock market.

Buffett’s primary focus is on not making mistakes. And acquiring a proven, profitable business with a wide moat is less risky than betting big on something new and different.

In other words, Buffett patiently waits to swing only at the single fat pitch.

That means Berkshire makes money every time you drink Coke and eat Kraft Macaroni & Cheese while you sit in the La-Z-Boy you bought at a Nebraska Furniture Mart.

(All this explains why Buffett avoided technology investments for the bulk of his career. That changed only recently as Berkshire’s single largest investment is now technology giant Apple.)

Betting on the Unpredictable

Alphabet’s investment philosophy is almost the complete opposite of Berkshire’s.

When you invest in Alphabet, you are investing in a core business – online advertising – that invests its excess cash in unpredictable “moonshots.”

In Silicon Valley, moonshots refer to investments that will either turn into giant, world-changing businesses…

Or never make a dime.

But it probably won’t.

And unlike Buffett, Page and Brin are okay with that…

Because Alphabet thinks of its “moonshot” investments as a portfolio of options.

Yes, most of its options will “expire worthless.” But the significant gains from unexpected winners will more than pay for the losers.

I ran numbers on YouTube to test this assumption.

In 2006, Google bought YouTube for $1.65 billion. (At the time, former Google CEO Eric Schmidt believed Google had massively overpaid for it.)

Twelve years later, YouTube is worth almost 100 times its purchase price. In fact, today it’s worth more than all of Google itself was in 2006.

That’s the essence of “moonshot” investing.

Show Me the Money

So let’s cut to the chase…

Is Berkshire or Alphabet the better investment?

The verdict over the past 10 years is clear. An investment in Alphabet (Nasdaq: GOOGL) has trounced Berkshire Hathaway (NYSE: BRK.B) since late 2008. 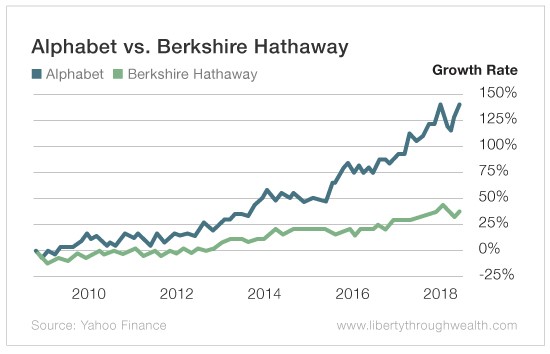 And it isn’t even close.

But where you should put your money to work depends on your risk appetite.

Berkshire has been traditionally less volatile than the overall market. In contrast, Alphabet’s annual returns have been lumpier.

Still, Alphabet’s willingness to invest in options-style moonshots like YouTube means it will likely continue to outperform Berkshire over the long term.

So, no, Alphabet is not the next Berkshire Hathaway…

Are You Profiting From the Golden Age of Investing?