As a small country on the periphery of Europe, Austria never attracted much attention from investors.

This all changed with the recent ascension of Sebastian Kurz as the “boy chancellor” of Austria.

Not only is Kurz a mere 31 years old… But he could pass for a millennial 10 years younger. 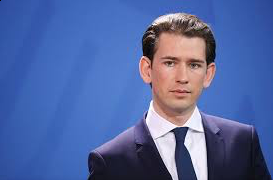 Kurz has become best known as Europe’s champion against the flood of migrants from the Middle East and Africa.

In short, Kurz is a young, cool conservative who holds the highest office in his land.

And his policies have singlehandedly put Austria back on investors’ maps.

A Primer on Austria

Like its young leader, Austria punches far above its weight, especially in terms of culture and economics.

Consider that the classic movie The Sound of Music is set in Austria.

The country gave Hollywood – and the state of California – Arnold Schwarzenegger.

Today, Austria is a member of the EU and known for its very high standard of living.

With a population of nearly 8.8 million, Austria’s gross domestic product stands at about $386 billion. (Think of Austria as a more populous version of Maryland.)

Vienna is not only Austria’s capital but also its cultural, political and economic center. And what a city it is…

The Economist Intelligence Unit recently ranked Vienna the most livable city on the planet.

Ranked on the basis of infrastructure, healthcare, education, stability and safety, and culture and environment, Vienna earned close to a perfect score.

Located between western and eastern Europe, Vienna benefited enormously from the collapse of communism in the 1990s.

This former capital of the Austro-Hungarian Empire once again became the gateway for companies wanting to do business in central and eastern Europe. (I worked for Austria’s largest investment bank in the 1990s on just these kinds of deals.)

Over the past 25 years, Austrian companies have made the fast-growth economies of the “New Europe” their economic playground.

Austria is not a place you’d typically think of investing your hard-earned U.S. dollars…

But perhaps you should.

It turns out that the iShares MSCI Austria ETF (NYSE: EWO) is up more than 42% over the past two years. 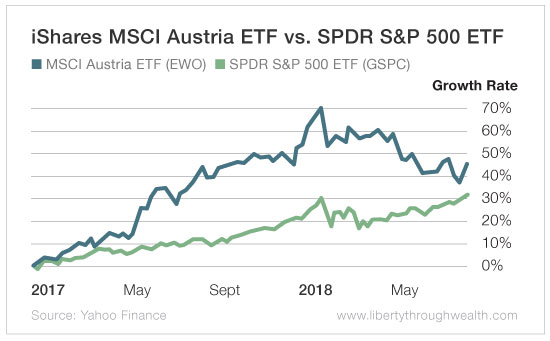 And despite these gains, the Austrian stock market remains relatively cheap.

By contrast, the U.S stock market trades at an eye-watering 31.2.

The bottom line? Austria is a hidden gem in Europe.

And now Oxford Club Members have the chance to get to know this remarkable country up close.

Bond Strategist Steve McDonald will be leading The Oxford Club’s Austrian Wealth Retreat to Innsbruck, Salzburg and Vienna from November 25 to December 2, 2018.

And I’ll be joining Steve for two days in Vienna to discuss more investment opportunities in Austria, as well as central and eastern Europe.

We can take only a few more people, so don’t wait too long to act. Reserve your place by calling Karoline Bowman at AESU Travel (800.638.7640, ext. 113) or emailing her at karoline@aesu.com. She’ll be happy to assist with your international flights as well.

The World of The Jetsons Is Almost Here