If you are a professional and have confidence, then I would advocate lots of concentration… If it’s your game, diversification doesn’t make sense. It’s crazy to put money in your 20th choice rather than your first choice… [Berkshire Vice Chairman] Charlie [Munger] and I operated mostly with five positions. If I were running $50, $100, $200 million, I would have 80% in five positions, with 25% for the largest.

Investors on Wall Street are wringing their hands as the U.S. stock market sell-off enters its third month.

But as a long-term investor, Warren Buffett is likely unrattled by Mr. Market’s recent mood swings.

Instead, he must be grinning ear to ear about the opportunity to use his $104 billion cash pile to buy stocks at a much lower price than they were at just two months ago.

The media has made much of Buffett’s big bet on Apple (Nasdaq: AAPL) – Berkshire Hathaway’s (NYSE: BRK-B) single largest holding – which has seen its stock price sell off almost 25% since its all-time high in October.

But the focus on Apple has overshadowed Berkshire’s recent revelation that it spent more than $13 billion on U.S. bank stocks during the third quarter.

It turns out that at the end of the third quarter, Berkshire Hathaway’s stock portfolio included 10 different bank stocks.

Together, the value of these bank stocks totaled more than $86 billion, accounting for an astonishing 42% of Berkshire’s stock portfolio. 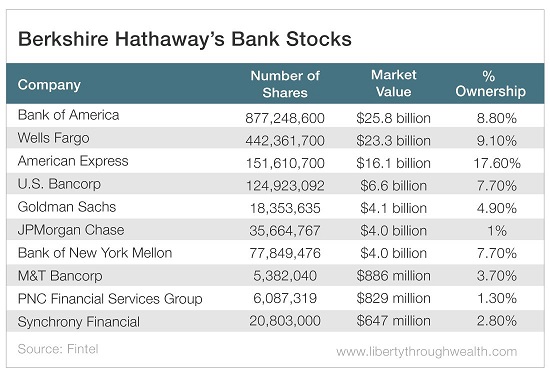 That makes Buffett’s collective bet on the U.S. financial sector almost twice the size of his bet on Apple.

Berkshire’s recent bets on the U.S. banking sector are unusually aggressive – even for an investor who advocates running a concentrated portfolio.

So why has the Oracle of Omaha fallen in love with U.S. banks?

First, the banking sector enjoys the kind of oligopoly that Buffett loves. U.S. banks have wide moats. And these moats have only gotten wider since the financial crisis of 2008.

Second, U.S. banks have been reporting record profits as a result of the Trump tax cuts. The FDIC estimates that tax savings were responsible for $6.5 billion of the $12.1 billion increase in bank profits since the second quarter of 2017.

Finally, Buffett loves bargains. With the banking sector trading at a price-to-earnings (P/E) ratio of around 12, it’s on sale compared with the rest of the market.

Still, Buffett faces some unique challenges managing a portfolio as big as Berkshire’s.

To move the needle, Buffett needs to make big bets. And it’s hard to find any single investment (besides Apple) that can do that.

And if Berkshire owns more than 10% of a company, it becomes an “insider,” subjecting itself to onerous SEC disclosure regulations.

This explains why Berkshire’s two largest bank investments – Bank of America Corp. (NYSE: BAC) and Wells Fargo & Co. (NYSE: WFC) – are both just under the 10% ownership threshold. (Buffett has special permission from the SEC to own more than 10% of American Express (NYSE: AXP).

It also explains why Berkshire added a new bank holding last quarter – JPMorgan Chase (NYSE: JPM) – in which Buffett could also eventually own a 10% stake.

How to Place Your Own Buffett Bet

The easiest way to track Buffett’s bet on the financial sector is, of course, to buy Berkshire Hathaway stock.

But there is an even better way…

Long the go-to ETF for financial sector exposure, it tracks an index of S&P 500 financial stocks, weighted by market cap.

As a look at this ETF’s top 10 holdings below confirms, there is plenty of overlap with Berkshire’s bets on financials.

In fact, its single biggest holding is Berkshire itself. 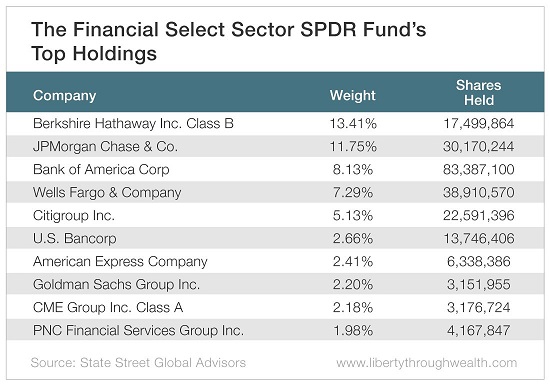 So if you want to replicate Buffett’s biggest bet, don’t bet on Berkshire.

One of Our Fastest Double-Digit Gains Ever