The recent correction in the U.S. stock market has been painful.

The CNN Fear & Greed Index – my favorite measure of market sentiment – has been stuck in “extreme fear” mode for well over a month.

If the current correction continues, it could mark the start of the first bear market since 2008.

Of course, long-term investors know that bear markets are inevitable…

After all, before the recent correction, the S&P 500 was trading at a cyclically adjusted price-to-earnings ratio of more than 32.

Even with the recent pullback, that number is just under 30 – and 75.7% higher than its historical mean. (This makes the U.S. stock market the third most expensive in the world after Ireland’s and Denmark’s.)

This all suggests an uncomfortable truth.

If the current correction does signal the start of the bear market, there is plenty of room for it to fall.

How to Prepare for the Worst

It does highlight, however, why you need a strategy when the bear market inevitably arrives.

Below are three bear market strategies you could consider today.

Warren Buffett has endured drawdowns of close to 50% three times in the past: once in the early 1970s, once in 1999 and again during the 2008 financial crisis.

He has warned that if you can’t endure such drawdowns, you shouldn’t invest in the stock market. In a bear market, “buy and hold” becomes “grin and bear it.”

But your ability to sell gives you a massive edge over large investors like Buffett.

The Oxford Club has a simple rule: Set a 25% trailing stop on most investments, unless instructed otherwise. It will do wonders for your psychological health when the bear market does arrive.

Sir John Templeton made his first fortune investing in the economic recovery of Germany and Japan after World War II.

He famously bought a basket of 100 stocks in war-torn Germany and watched them soar. He plowed his funds into Japan in the 1950s, profiting from that market’s remarkable rise.

It is less well-known that Templeton made his quickest fortune shorting dot-com stocks in late 1999.

While his timing was good, it was not perfect.

In the early days of the trade, his positions went against him. But by March 2000, Templeton’s bet against the dot-com stocks looked ingenious. Templeton made $90 million in a matter of months.

Today, there are plenty of ways to replicate Sir John Templeton’s success.

Unlike in 1999, you can buy exchange-traded funds (ETFs) that short the U.S. market. In fact, you can even short the market using leverage. Keep that in mind if the stock market starts to dive.

Popularized by Nassim Nicholas Taleb, a “black swan” is a rare, high-impact and unexpected event.

In investing, black swans happen when financial markets fall fast and hard – like the crash of October 19, 1987.

More colorfully, a black swan can come out of the blue at any time.

So how best to protect your portfolio? You could engage in a complex range of options strategies like Taleb does.

Or you could just buy an ETF that implements an options strategy for you.

Specifically, the Cambria Tail Risk ETF (CBOE: TAIL) invests about 5% of its assets in a portfolio of out-of-the-money put options on the S&P 500. It holds the rest of the assets in 10-year U.S. Treasurys.

Both Treasurys and put options tend to rise during a market crash. But like any other form of insurance, this protection costs money.

Cambria spends roughly 1% of the fund’s total assets purchasing put options over rolling one-month periods. So this “insurance” costs you about 1% per month.

How has this ETF fared since the market pullback?

It has behaved precisely as advertised.

Meanwhile, the price of the Cambria Tail Risk ETF has risen by more than 8%. 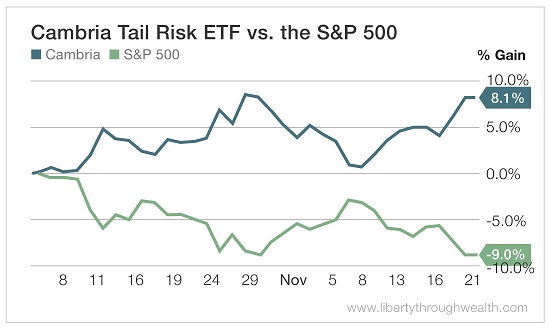 Always remember that drops in the market are inevitable.

So make sure you have a bear market plan in place today.

The Worst Trade I Ever Made… and How You Can Benefit

How to Build a “Barbell” Portfolio