I’ve always been skeptical of the “China miracle.”

I admit this is due to my deep-seated distrust of countries run by communist parties.

(And don’t let the modern skyscrapers fool you. As Richard McGregor’s excellent book The Party: The Secret World of China’s Communist Rulers confirms, China is still very much a communist country!)

And communist countries are famous for their “Potemkin villages” – a long tradition of constructing facades to deceive outsiders into thinking that a situation is better than it really is.

The term comes from when Russian Empress Catherine II’s lover Grigory Potemkin constructed a fake portable village to impress her during her journey to Crimea in 1787.

Here’s why this matters to U.S. investors…

Consider the massive disconnect between the growth of the Chinese economy over the past decade and the performance of its stock market.

Just compare how the largest China ETF has fared compared with the S&P 500 since the U.S. stock market bottomed almost 10 years ago… 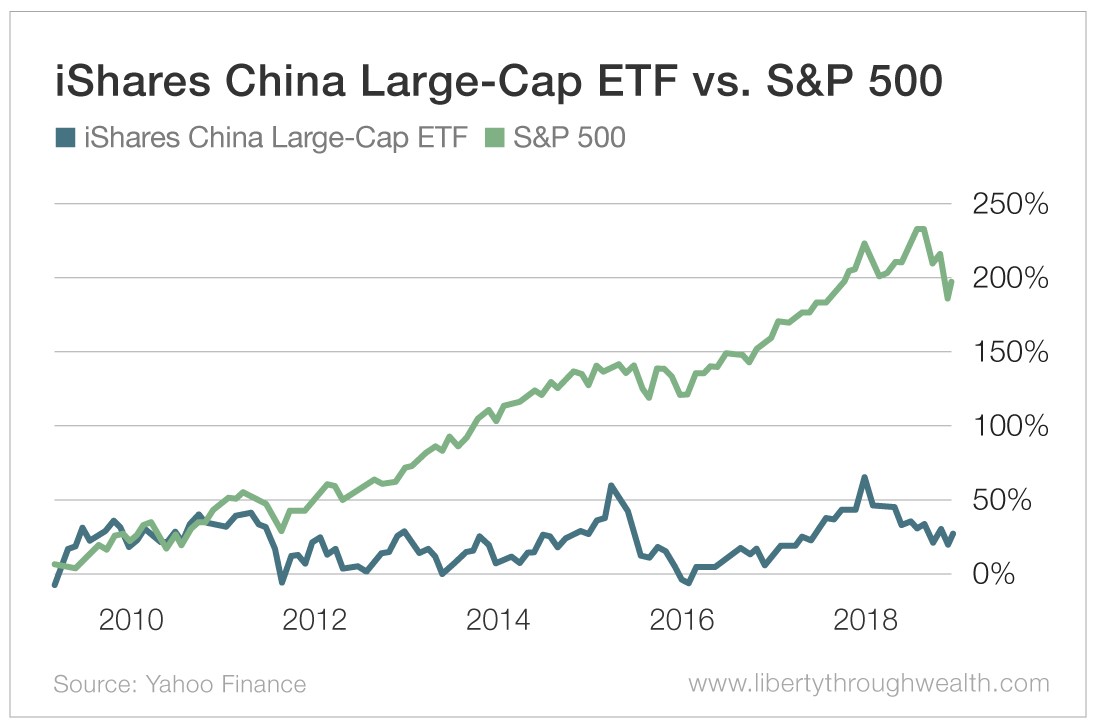 Sure, some investors have made big money in China during its periodic booms and busts.

A well-timed entry (and exit) from PetroChina (NYSE: PTR) made Warren Buffett a cool $3.5 billion on a $500 million investment.

But I’d put that down to a well-timed speculation, rather than to a traditional investment.

Today, I believe we have entered another one of those speculative periods in the Chinese stock market.

First, President Trump’s hard-nosed stance against China scared off a lot of investors. But with the U.S. and China apparently on the verge of a trade deal, that uncertainty is fading.

And investors tend to greet any news of progress with a flurry of buying.

Just last Monday, China’s CSI 300 Index surged 5.9% after some good news over the weekend. With only two stocks ending the day lower, it was one of the best days the Chinese stock market has seen in the past 20 years.

Second, investors have discovered a newfound appreciation for the “China put.”

Still, the Fed’s efforts pale in comparison to China’s efforts.

The Chinese authorities will do whatever it takes – inject liquidity, prohibit short selling, bail out banks – to keep the “China miracle” from derailing.

Third, on March 1, MSCI – the world’s leading equity index provider – announced it would quadruple China’s weighting in its flagship emerging markets index to 3.3% by November.

But it means that an additional $125 billion is set to flow into Chinese stocks this year as index stocks are forced to up their weighting.

The smart money agrees with this short-term bullish assessment…

Western investors will never get a complete view of what lies behind China’s Potemkin economy.

But what little they see is hardly encouraging.

Still, after sitting out much of 2018, I believe now is a good time to invest in China for the reasons I outlined above. (That is also what I’ve recommended to subscribers of my Oxford Wealth Accelerator.)

But understand the Chinese stock market is not for buy-and-hold investors.

How My 2023 Predictions Are Playing Out