– George Soros, hedge fund manager and philanthropist
There’s a new joke making the rounds on the streets of London…

British Prime Minister Theresa May has officially changed her name to “Theresa June.”

The United Kingdom was scheduled to leave the European Union tomorrow, March 29, at 11:00 p.m. GMT.

That date was put on hold when Theresa May requested the EU extend the deadline for Brexit to June 30.

Although the EU granted an initial extension only to April 12, the uncertainty surrounding Brexit continues.

Predicting the eventual outcome of the chaos surrounding Brexit is a mug’s game, so I won’t even try.

Instead, today I want to address a practical investment-related question: Is the financial market’s pessimistic consensus about the U.K. stock market wrong? (And if so, should you risk your hard-earned wealth betting on its rebound?)

I believe the answer (to both) is an emphatic “yes.”

Since then, the U.K.’s stock market has dwelt in investors’ doghouses – with the prospect of Brexit depressing U.K. stock valuations.

The Financial Times of London even dubbed the U.K. stock market “close to uninvestable.”

Such extreme thinking is music to my contrarian ears.

First, if you look at just the headlines, you’ll think the U.K. economy is about to fall off a cliff.

In reality, the U.K.’s economic backdrop is surprisingly robust.

The economy is set to grow 1.2% this year. The unemployment rate stands at 3.9% – its lowest level since 1975. Wages are also rising at their highest rate in a decade, leaving consumers flush with cash.

Despite the efforts of Frankfurt and Paris, highly paid bankers are decamping to jobs in other parts of the EU at lower-than-expected rates. Post-Brexit London will retain its position as a leading global financial center.

Here’s the big picture as I see it…

If the U.K. exits with a Brexit deal, then it’s back to business as usual – except under amended terms.

If the U.K. crashes out of the EU without a deal, yes, there will be chaos and unexpected consequences.

Still, the U.K. will muddle through.

In either scenario, at current valuations, Britain is a buy.

How to Bet on the Bounce in U.K. Stocks

Profiting from a rebound in the U.K. stock market is as easy as buying the iShares MSCI United Kingdom ETF (NYSE: EWU).

And despite the political chaos that reigns at Westminster, the United Kingdom ETF has matched the performance of the booming S&P 500. 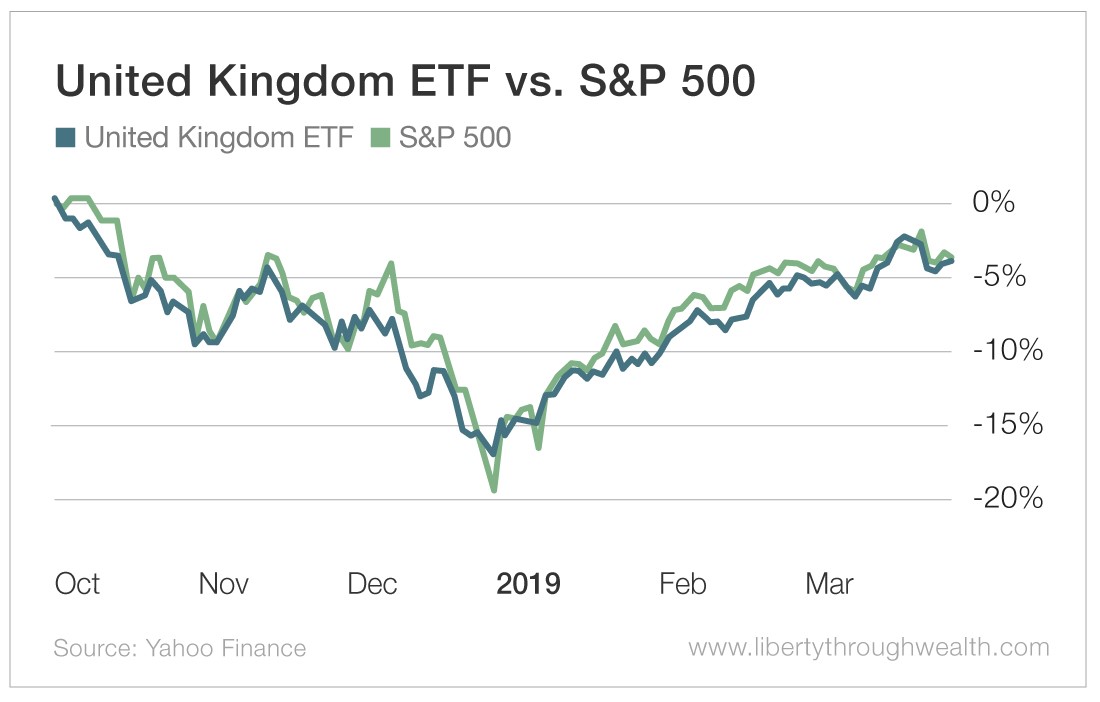 The market will bounce back, just as soon as the Brexit uncertainty is lifted.

Global investor Sir John Templeton built his career – and a fortune – by investing during what he called “the moment of maximum pessimism.”

So is today the moment of maximum pessimism in the U.K.?

I don’t know for sure.

But I do know that one way or another, Brexit will be resolved.

And the moment that happens, British stocks will soar.

How to Bet Big on the Bounce

It’s Time to Take the Plunge