Silicon Valley investors are the hyper-optimists of the investment world.

Every potential investment shoots for the moon.

“If you aren’t providing a solution to a problem that is at least 10X better than the current one, it’s not a project worth pursuing.”

Whether you call these ventures “moonshots”…

Each project has one thing in common: Its success is driven by the promise of exponential change.

And understanding the implication of exponential change is the key to recognizing and investing in tomorrow’s biggest stock market winners.

That’s why I’ve had a hard time getting my head around why my venture capital friends in Silicon Valley would invest millions of dollars in a company based on a flimsy business plan.

For me, this strategy seemed to carry more than a whiff of financial mania…

Which would inevitably implode in a dot-com-style collapse.

Yet when disruptive companies like Uber with next to no assets were valued more highly within a few years of their founding than iconic American companies like Ford (NYSE: F)…

I knew I had something to learn.

And that something was the idea of exponential change…

Futurist, author and inventor Ray Kurzweil was the first to argue that the pace of change in technology is not linear… but exponential.

He also pointed out that humans aren’t wired to understand how quickly the pace of exponential change can accelerate.
As Kurzweil put it…

Today, we anticipate continuous technological progress and the social repercussions that follow. But the future will be far more surprising than most people realize because few observers have truly internalized the implications of the fact that the rate of change itself is accelerating.

Traditional investors have always asked, “How much is the company worth, and what is the price today?”

In contrast, venture capital investors ask, “What are the chances of a company’s success, and how much should we pay for that potential success?”

The graph below illustrates the difference between linear and exponential change. 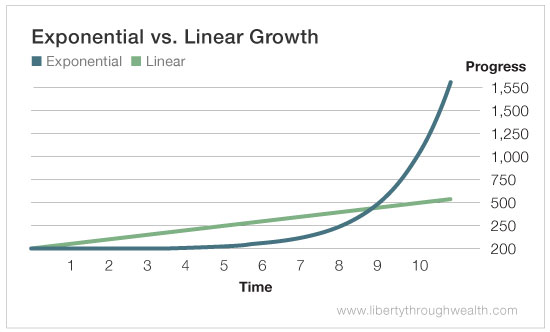 Let me illustrate with an example.

Consider for a moment how you would feel after you made an investment driven by exponential growth.

After all, the Nebraska Furniture Mart generates steady and predictable cash flows.

That is, until one day, when the impact of exponential growth kicks in.

Overnight, your investment goes from generating losses to minting money.

Since then, the cost of sequencing a human genome has fallen from $3 billion to under $1,000.

That drop was much faster than expected.

With Illumina trading today at a price-to-earnings ratio of 83, Warren Buffett would never invest in the company.

But an exponential investor would look at Illumina very differently.

With the price of gene sequencing tumbling and the fact that approximately 90% of all the human genes are sequenced on Illumina equipment, the company’s prospects have soared… exponentially.

Within a decade, all babies will have their DNA sequenced at birth.

And if you have serious illnesses, your DNA will be sequenced in detail many times. 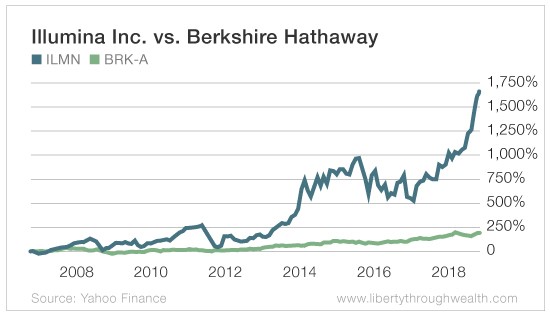 But around 2007, Illumina’s exponential growth kicked in…

And the market recognized the prospects of pervasive DNA testing (and subsequent promise of enormous profits).

Fast-forward 11 years, and Illumina has outperformed Berkshire Hathaway by close to 9 to 1 since then.

If you want slow and steady returns over time… stick with conventional investments like Berkshire Hathaway.

But if you’re looking for an investment home run, invest in the relentless mathematics of exponential change.

You’ll be glad you did.