“Prediction is hard, especially about the future.”

In today’s tradition, Boston money management firm GMO just published its annual outlook for all major asset classes for the seven years ahead.

First, GMO expects emerging market stocks to rise an average of 5.2% per year over the next seven years. Invest in the cheapest companies in emerging markets, and that expected return jumps to 9.8%.

Second, GMO predicts a negative 3.7% return per year for U.S. large cap stocks between now and 2026.

Both of these predictions may leave you scratching your head.

After all, if you’ve made money in U.S. stocks over the last decade and you’ve only lost money in emerging markets, you probably expect this set to continue.

The trend may shift in favor of emerging markets, as GMO predicts. Or it may not.

The truth is, your guess is at least as good as GMO’s.

Here’s why you should take GMO’s prediction – and any comparable ones – with a grain of salt.

Review GMO’s predictions since 2010, and you’ll find that they weren’t that different from what they are today.

And GMO’s 2010 predictions weren’t just off. They were way off…

Compare GMO’s seven-year predictions made in 2010 with how things turned out:

Excuses, Excuses (or We’re Too Smart to Be Wrong)

GMO would, of course, retort that its predictions weren’t wrong. They were just early.

And the fact that GMO has been wrong for almost 10 years makes the impending bounce in emerging markets all the more likely – and extreme.

Ditto for its prediction of the impending “Japanification” of the U.S. stock market – which implies decades of stagnation.

Here’s the harsh reality: GMO has been consistently wrong. And this has cost investors who followed its advice a lot of money.

I’m sure GMO has an able team of financial analysts who develop sophisticated models that crunch an ever-growing amount of data. But all that data just gives them a misplaced self-confidence.

Second, the mental model behind their predictions – reversion to the mean – is a lousy way to time the markets.

Yes, a market can be overvalued or undervalued for only so long. By analogy, a rubber band can stretch only so far before it snaps back.

So the current undervaluation of emerging market stocks portends massive outperformance in the future. The problem is that rubber bands can stretch a lot farther than we think.

GMO makes predictions about the future returns on an asset class, but it never calculates how much following its earlier advice cost investors.

Put another way, it doesn’t calculate the opportunity cost of holding underperforming assets.

Had you taken that same $10,000 and invested it in the U.S. stock market as represented by the Vanguard Total Stock Market ETF (NYSE: VTI), your investment would have been worth $25,224. 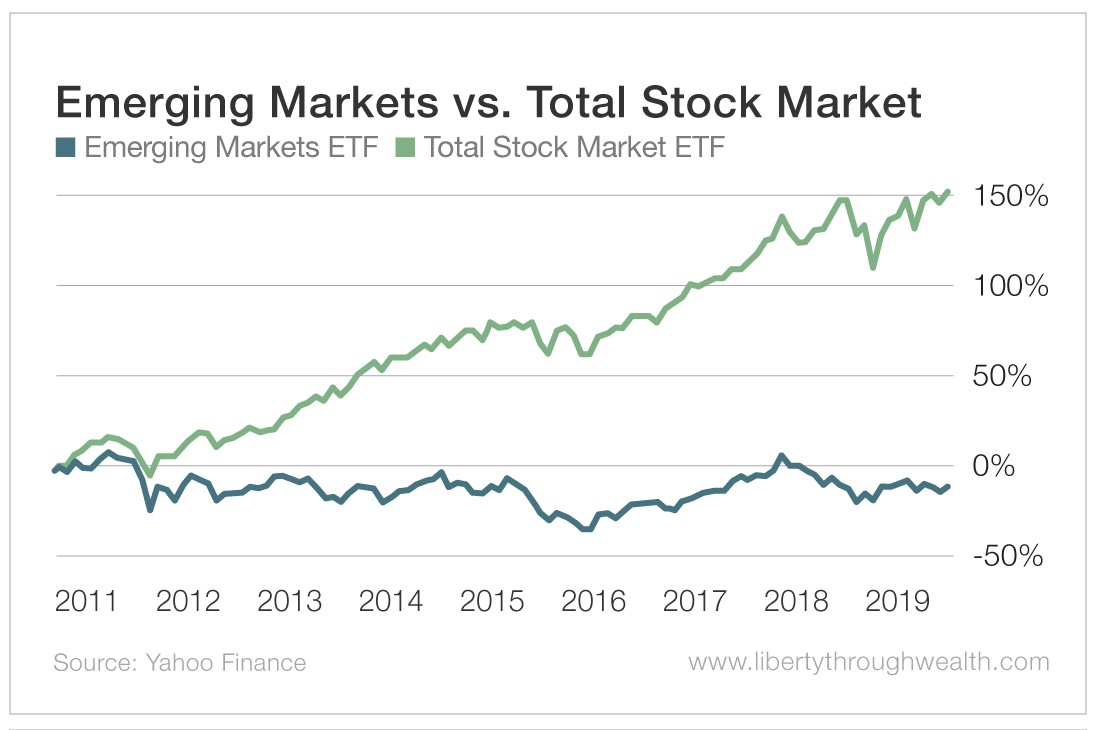 How long will it take for them to catch up to the U.S. stock market? Even under the best of conditions, it will take half a decade at best.

And those are years that you may not have.

They will almost certainly be wrong. By a lot.

Income and Net Worth: Why Unequal Is Not Unfair