“October: This is one of the peculiarly dangerous months to speculate in stocks. The others are July, January, September, April, November, May, March, June, December, August and February.”

Last week was a white-knuckled ride for investors.

Traders across the globe sat glued to their screens, watching nervously as the value of their investment accounts tumbled.

High-flying tech stocks like Netflix and Amazon that had led the U.S. stock market up over the past decade led the market down. Amazon founder Jeff Bezos saw his net worth drop by $9 billion.

Even as the markets bounced sharply on Friday, financial pundits struggled to answer ”What just happened… and why now?”

Here’s a quick recap of the most popular explanations:

The 10-year Treasury yield hit a seven-year high of 3.25% – a critical level for analysts predicting the end of the 30-plus-year bull market in U.S. bonds. This jump signaled an increase in risk aversion that hit the U.S. stock market hard.

Fast-growing tech stocks – most notably the FAANG stocks – led the U.S. stock market higher in the past two years. But that remarkable run led to some equally remarkable valuations. Investors woke up last Wednesday morning and decided to dump these market favorites and rotate into cheaper value stocks.

The International Monetary Fund cut its global growth forecasts for both 2018 and 2019. Emerging market stocks and currencies were already tumbling for much of the year. The U.S. stock market was the exception. It took until last week for this rising global instability to reach U.S. shores.

Algorithmic traders like commodity trading advisors and trend followers manage about $1.5 trillion in assets. Their strategies buy and sell stocks around the same time. When markets fall below critical technical levels, these funds unleash an avalanche of selling.

As billionaire hedge fund manager Leon Cooperman put it, “Warren Buffett made his fortune by buying low and selling high… Machines buy strength and sell weakness and aggravate the moves.”

So what’s the correct explanation?

Every explanation is what author Nassim Nicholas Taleb calls a “narrative fallacy” – a story that “addresses our very limited ability to look at sequences of facts without weaving an explanation into them, or, equivalently, forcing a logical link, an arrow of relationship upon them.”

We humans need “narrative fallacies” – convincing explanations rendered after the fact – to make sense of the world.

But from a purely trading perspective, whether an explanation is accurate is irrelevant.

What matters is how you react to the change in market circumstances.

And your reaction, in turn, is 100% driven by your assessment of market sentiment.

I’ve written about market sentiment before. I call it “the Rodney Dangerfield of investing” because – among academics and Wall Street analysts – it “gets no respect.” Yet I’m convinced short-term moves in the market are driven by little else.

To measure market sentiment, I look at the CNN Fear & Greed Index each morning.

And what did it tell me about the market’s mood as it opened on Friday?

After spending many months in the “Greed” range, it had dropped to the “Extreme Fear” range of 5 in just two days. 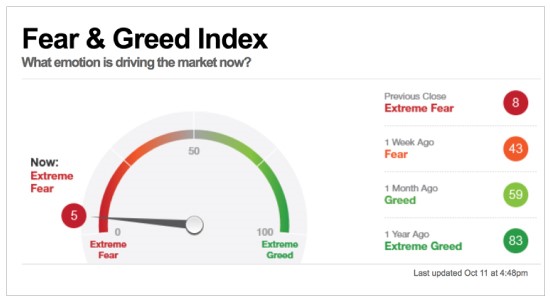 The buy signal could hardly have been stronger.

That same day, sentimenTrader published a study that found that when the CNN Fear & Greed Index drops below 8, the S&P 500 trades higher a month later a remarkable 86% of the time.

And the backdrop for the U.S. stock market in the coming months remains strong.

Still, talk is cheap unless you have skin in the game.

So on Friday morning, I increased my bets on the very same U.S. tech stocks that led the sell-off.

Now, this is a big call. After all, there’s no guarantee it will work out.

Still, financial speculation is a game of odds. And with the odds on my side, it’s a bet I’m willing to make.

How a Trade War Can Create a Bear Market

Are We Headed for Another Crash and Great Recession?