Editor’s Note: Recession is, unfortunately, inevitable. But in today’s article, Matt Benjamin provides a rational outlook on the future of the market and keen insights on how you can take advantage of a poor first quarter.

That is, treat this as a buying opportunity. One place to start: truly innovative companies that are solving real-world problems…

The duo sat down to talk about Alex’s next big wealth-creating prediction. The conversation left Bill stunned.

Is a recession coming?

The short and certain answer: yes.

But if you know anything about the business cycle, you also know that answer is utterly meaningless.

There will always be another recession. It’s inevitable.

The relevant question is, when will the next recession begin? And for investors, what should we do about it?

By conventional measures, we’re already halfway to a recession. Many people define that term as two consecutive quarters of negative economic growth.

And we just had the first.

U.S. gross domestic product fell 1.4% in the first quarter of the year.

If the economy contracts in the April-to-June quarter, many Americans (and every Republican hoping to win in November) will declare that we’re in a recession.

(Note: “Two quarters of negative GDP growth” is actually not how recessions are officially defined. The business cycle – the peaks and troughs of economic activity – is determined and dated by the National Bureau of Economic Research using many economic metrics – including employment, personal income, consumer spending and industrial production, among others.)

All that said, the U.S. economy faces many headwinds at the moment that could push it into recession.

On the positive side, it was clear from the recent GDP report that the -1.4% number resulted in part because the U.S. economy is in better shape than much of the rest of the globe.

The U.S. bought tons of imports from abroad and exported less (because of less demand from other nations). In the GDP equation, net imports subtract from growth.

But the potential buying opportunities don’t stop there…

In addition, household finances remain very healthy. Savings accounts are bigger than they were in 2019, the value of Americans’ real estate and stocks is up, and debt levels are down.

It’s estimated that U.S. households piled up some $2.5 trillion in excess savings since March 2020 (much of that was due to stimulus checks and a slowing of spending during the pandemic). 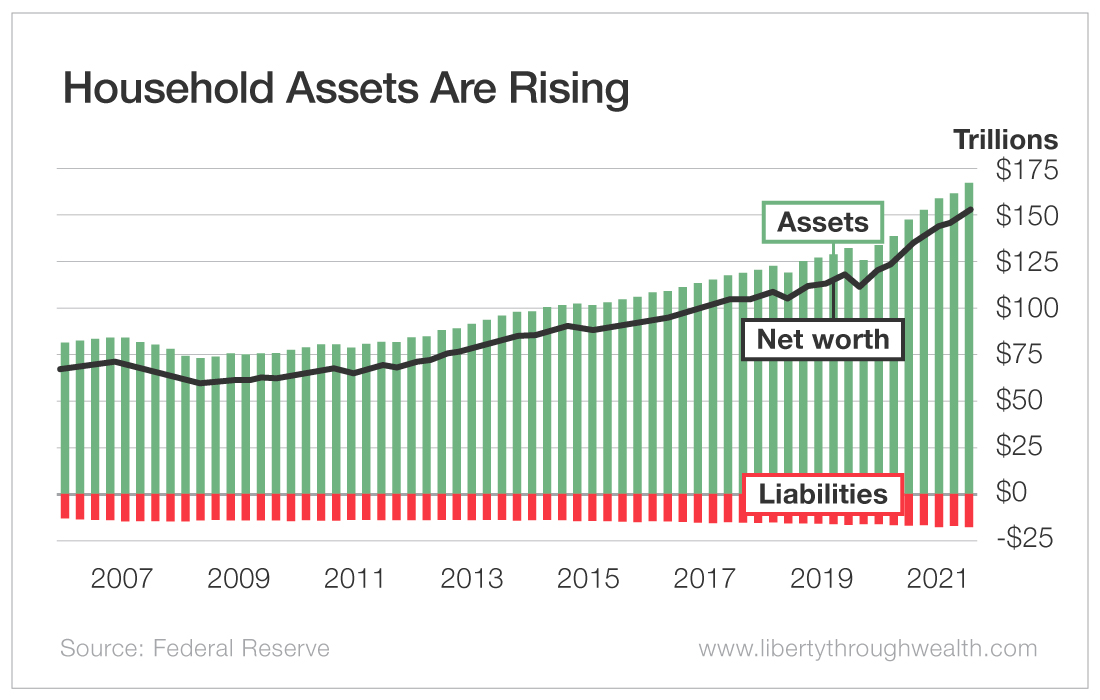 You can see from the chart above that household assets and net worth have been rising at a healthy clip for about seven quarters while debt has stayed roughly the same.

Finally, while COVID-19 stimulus checks are a thing of the past, there will be lots of new federal spending as a result of the $1.2 trillion infrastructure package that Congress passed late last year.

All that funding for new roads, bridges, public transit and other infrastructure will boost construction and other sectors across the country this year.

So most economists don’t expect a recession in the very near term. In fact, the U.S. economy is likely to return to positive growth of 2% or higher in the second quarter.

Really, the biggest risk to the economy at the moment is inflation and the Fed’s reaction to it.

This week the Fed raised its target rate by 50 basis points, or 0.5 percentage points, the largest rate hike it has delivered since 2000.

And while we’ve seen the Fed waver from promised hikes in the past, Fed watchers now believe Jerome Powell and Co. will continue to raise rates until inflation comes back under control, even if that risks a recession within two years.

How to Play the Market Reaction

How will markets react?

Well, you already know that we don’t need a recession to cause a major drawdown in the stock market.

This past April was the worst April for the S&P 500 since World War II.

That index was down almost 9% during the month, while the Nasdaq dropped more than 13%.

If there is a recession, stocks will probably fall even lower. And as I wrote above, we will eventually have a recession, probably by the end of 2023.

Despite that, now is the time to take advantage of the lower share prices and better valuations that resulted from the poor first quarter in the markets.

Warren Buffett has already been doing just that.

When most investors were selling, Buffett’s Berkshire Hathaway (NYSE: BRK-A) spent more than $51 billion on stocks in the first quarter, making it the biggest net buyer of stocks for one quarter in over a decade.

Clearly, Buffett sees this as a buying opportunity.

So does my colleague Alexander Green.

At The Oxford Club’s 24th Annual Investment U Conference last week, he told the crowd that “every market break, every significant sell-off of the last 200 years has been, with sufficient hindsight, a buying opportunity, and I believe we’re at a buying opportunity today.”

How to Remain Secure Amid Fear of Recession