A Skeptic’s Guide to the Fastest Bull Market in History

Note from Managing Editor Allison Brickell: This year, we’ve witnessed the fastest bull market in history. Investors need to get off the sidelines and into the market. But many of them are still uncertain and afraid to risk their hard-earned money.

If you’re not sure how to shake your market fears, Alexander Green is here to help. He has more than 30 years of experience in the markets. And he’s ready to answer your questions!

Tune in to our Town Hall Facebook Live Event with Alexander Green tomorrow, August 20, to hear Alex answer questions from readers. It’s all happening on the Liberty Through Wealth Facebook page. If you’d like to learn how to start investing, how to stay positive or anything else about the world of money, you won’t want to miss this. Keep an eye out for the video this Thursday!

The S&P 500 closed at its highest level ever yesterday, up 52% from its March low.

“The market has lost its mind,” a friend groused yesterday, not least of all because he sold out of it several months ago. “The past six months make no sense whatsoever.”

After all, more than 5.4 million Americans have been infected with the coronavirus. Over 170,000 have died from it. 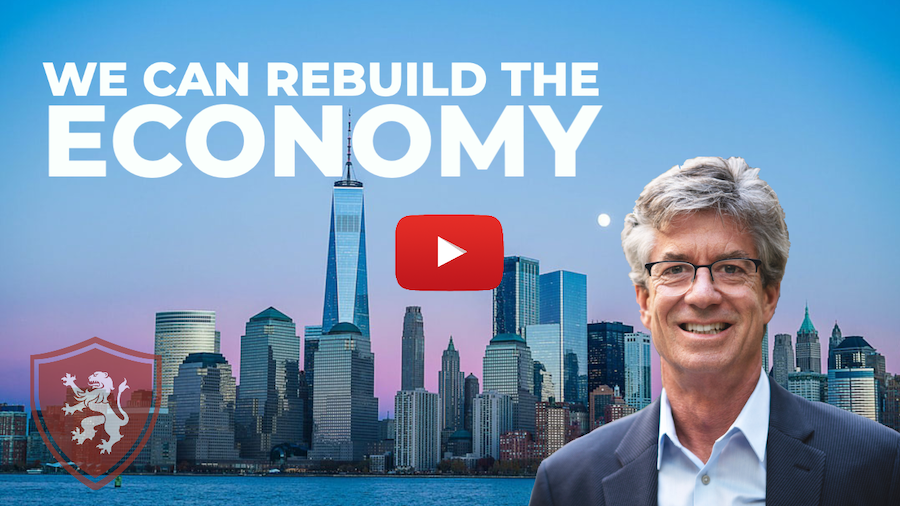 Tens of thousands of small businesses have closed.

Tens of millions of Americans have been laid off.

And corporate earnings have plunged as a result of the biggest economic contraction since the Great Depression.

Yet the Nasdaq and S&P 500 just touched all-time highs.

While this may sound crazy, this year’s market action has been entirely rational.

Here’s a quick review of what’s happened over the last six months and why, as the fastest bear market in history morphed into the fastest bull market ever.

Stocks got off to a good start in January but quickly went into meltdown mode in February as it became clear that the coronavirus wouldn’t – indeed couldn’t – be contained.

An economic shutdown was coming to avoid overwhelming the nation’s hospitals and healthcare clinics.

We were headed into a health crisis, a recession, business closures, layoffs, supply chain disruptions and negative earnings for most companies. Not good.

By mid-March, the orderly selling turned into panic-selling, taking stocks to attractive long-term valuations and drawing in bottom-fishers.

As it became clearer that the virus was not as deadly or as easily transmitted as originally feared, and that hundreds of millions of scientists and researchers around the world were working around the clock on a treatment and vaccine – and with unprecedented cooperation with each other and government agencies – the market rebound gained strength, even as retail sales plunged, unemployment soared, and the economy tanked.

Understand that the stock market isn’t terribly concerned about what is happening – and isn’t much concerned at all with what has happened.

It cares about what lies ahead.

Investors – who routinely look six to nine months out – realized that things would get better, not worse.

That made the rebound entirely logical. But a new all-time high?

Yes, a lot of small businesses in local communities have been negatively impacted or even devastated.

(It’s estimated that more than 100,000 of them nationwide have closed, many of them for good.)

But the stock market reflects only the fortunes of publicly traded companies.

These firms are larger, better capitalized and more adaptable.

To give but one example, Darden Restaurants (NYSE: DRI), owner of Olive Garden, LongHorn Steakhouse and other chains, is now serving thousands of former customers of the many small, family-owned restaurants that shut down.

So it’s entirely rational that Darden’s share price has more than doubled since March. (Something the company’s insiders knew when they piled into the stock six months ago.)

Note, too, that the Nasdaq and the S&P 500 have been driven higher by the performance of a handful of tech giants that are prospering greatly during the pandemic.

The performance of these stocks has had an outsized effect on the S&P 500, since the index is market cap-weighted. (Just 10 companies account for 27% of its value.)

Investors have rationally sorted out the industries and companies that are thriving from those that are not.

Airlines, cruise lines, hotels, and brick-and-mortar retailers, for example, are down for the year.

If they had gone up and e-commerce, networking, healthcare and software companies had gone down, I’d concede that the market had lost its mind.

But that hasn’t happened.

These things bode well for the market.

Let me introduce a note of caution, however.

Stock valuations are historically high. That’s not hard to understand when the economic outlook is improving and cash and high-quality bonds pay next to nothing.

But sentiment has also reversed over the last five months.

In a remarkably short time, we’ve gone from abject pessimism to skepticism to optimism.

The next stop is euphoria, a danger signal for investors.

When everyone is convinced that stocks have nowhere to go but up, who is left to take share prices higher?

Investors are not euphoric yet, but we are getting closer, as evidenced by the surge in penny stocks, cybercurrencies, and mom-and-pop day traders.

There are good reasons why the market is up – and reasons for it to go higher still. (The trend is indeed your friend.)

But things can and eventually will turn around, whether it’s a mere correction or a new bear market.

It would be unusual for a serious downturn to begin shortly after the S&P hit a record high.

But these are nothing if not unusual times.

So stick to quality names. Diversify. Spread your risk outside equity markets. And run trailing stops behind your individual stock positions.

That will give you plenty of upside potential with strictly limited downside risk.