Editor’s Note: In today’s article, Nicholas Vardy explains why many of the world’s smartest investors are shifting their focus to energy stocks as tech stocks fall out of favor.

Yet Alexander Green has discovered another way to play the market that could generate even greater returns than energy stocks offer.

You see, there are certain events that could deliver more money, in a shorter period of time, than virtually any other strategy.

I do recall when gas hit $1 per gallon…

When the speed limit dropped to 55 miles per hour…

And when Mrs. McNellis told us that we had to wear sweaters to our then cold and clammy classrooms at Colfax Elementary School.

Here in the U.K., my utility bills have just tripled.

Americans are paying over $5 for a gallon of gas.

And come autumn, my kids might even be told to wear sweaters (“jumpers”) to school.

Second, what worked in investing over the past decade will not be what works over the coming decade.

Third, you should follow the smart money, which has already shifted its strategy toward investing in energy stocks.

The Big Shift Away From Big Tech

Near their peak in August 2021, these stocks were collectively worth $7.1 trillion.

And even after Apple’s recent pullback, its $2.1 trillion market cap is still larger than the annual GDP of Russia ($1.7 trillion).

Now, investors love to extrapolate the past into the future.

That extrapolation suggests that Big Tech will continue to dominate the markets.

And that you should “buy the dip” in Big Tech.

Sure, that may work over the short term in a technically oversold market.

But savvy investors with a longer time horizon are already turning their attention away from Big Tech in favor of old-school energy stocks.

Perhaps nothing illustrates this better than a watershed moment on May 12.

The New Bull Market in Energy

A mere 18 months ago, energy was the most hated sector in the world.

Since then, energy has become the best-performing sector in the world.

Over the past two years, you’d have made far more money investing in an exchange-traded fund (ETF) of old-school energy stocks than in Cathie Wood’s Ark Innovation ETF (NYSE: ARKK) of high-flying disruptive stocks. 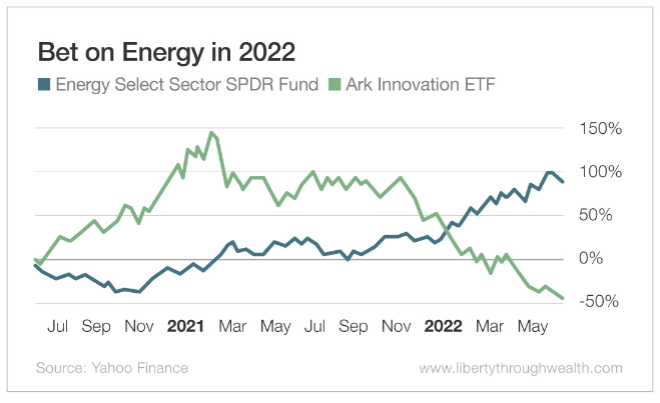 Here’s why I expect energy to continue to soar in the coming decade.

First, the world is running out of oil.

Yes, I know you’ve heard this before.

And much like in “The Boy Who Cried Wolf,” this warning has so far turned out to be overblown.

In the end, technology has always come to the rescue.

Those technologies recently turned the U.S. into the world’s largest oil producer.

Still, other signs are more ominous.

The oil minister of Saudi Arabia has warned that the world will run out of oil by 2030.

His United Arab Emirates counterpart has said OPEC would be unable to guarantee sufficient oil supplies when airplane travel and China come back online.

Why would an oil company commit billions of dollars to develop new energy projects if they are demonized by investors, governments and the media?

Even if oil companies were to start building oil production facilities and refineries today, it would take five or six years before these could come online.

Why Energy Is the New Big Tech

Meanwhile, the world’s savviest investors have shifted their attention to oil and other energy stocks.

Energy Aspects, a consultancy, says we are facing “perhaps the most bullish oil market there ever has been.”

The good news is that the bull market in energy stocks is just starting.

So you have plenty of time to board the runaway train with an ETF like Energy Select Sector SPDR Fund (NYSE: XLE), highlighted in the chart above.

I believe energy will become the dominant sector in the financial markets in the 2020s, much like Big Tech dominated the past decade.

Oil companies like Chevron and Exxon (NYSE: XOM), as well as diversified commodity companies like BHP Group (NYSE: BHP) and Rio Tinto (NYSE: RIO), will once again join the ranks of the most valuable companies in the world.

I’m banking on it.

I recommend you do the same.

Is Financial Success Due to Skill… or Luck?

The Biggest Financial Revolution Is Just Around the Corner

This Sell-Off Suggests a Giant Opportunity