He provides thought-provoking insights on a great long-term investment opportunity (even in this down market)!

Jonathan notes that though renewable energy is already experiencing rapid growth, it has a long runway ahead of it.

It’s been a tough year to be a market optimist, don’t you think?

It seems like every day comes with more negative news and disappointing economic data, which – outside of a few brief rallies – continue to drive this market ever downward.

And with the S&P 500 down 21% year to date, many investors may find themselves discouraged from putting their money to work in such a volatile market. Understandably so.

But one thing I’ve noticed is that short-term volatility can easily distract from one’s long-term investment goals. And the best investors know that the greatest returns don’t come from timing the market but from maximizing time in the market.

In fact, while it may not feel like the best time to be a stock buyer, there’s good reason to believe there are still plenty of long-term investment opportunities out there.

Today, I’d like to explore one opportunity in particular…

One of the most promising and fastest-growing sectors in the market today is renewable energy. (Specifically solar – but more on that later.)

Since crashing due to a major demand drought early in the pandemic, the energy sector has made a strong recovery from its March 2020 lows – outperforming the S&P 500 by more than three times as global energy demand gradually recovered.

Over the last few weeks, the outlook for energy has grown increasingly uncertain due to oil price volatility. Although many analysts see more potential downside in the near term, short-term price moves don’t always speak to long-term trends.

If you take a step back and ignore short-term crude oil price fluctuations, you may see a far more bullish trend forming within the energy industry. And it comes on the heels of a major transition from fossil fuels to renewable energy. 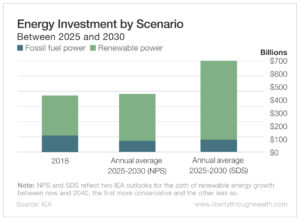 According to the International Energy Agency (IEA), even conservative estimates indicate that investment in renewable power is going to outpace fossil fuel power by a wide margin over the next eight years.

This transition to renewables is spurred by international efforts to reach net-zero carbon emissions.

And a handful of countries have already begun making significant progress. Some of the leaders include…

Many other countries are still far behind, however.

In 2021, renewables accounted for less than 29% of global electricity production. Based on the IEA’s best-case scenario, that figure could hit 60% by 2030.

So we can expect investments in renewable energy to continue to climb around the world. And the companies at the forefront of this transition will emerge as the new leaders in the energy sector.

The Sun Is Out… So Solar Is In

Over the last 10 years, solar capacity in the U.S. has grown at an average annual rate of 33%.

According to the IEA…

Solar [power] alone accounts for more than half of all renewable power expansion in 2021, followed by wind and hydropower.

No other energy resource comes close to this level of growth… which is why solar could be the best way to play the broader expansion of renewable energy. 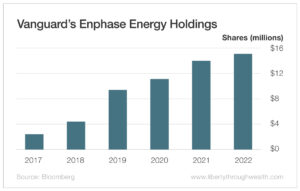 For example, Vanguard has been accumulating shares of one of the leading solar companies, Enphase Energy (Nasdaq: ENPH), at a rapid rate over the last five years, increasing its holdings by an average of 44% per year.

Likewise, BlackRock (NYSE: BLK) has increased its holdings from 700,000 shares to more than 14 million.

What exactly is behind the industry’s rapid growth?

The recently signed Inflation Reduction Act is expected to boost solar deployment by more than 40% over the next five years. (Many countries in Europe have similar policies in place.)

And U.S. homeowners who want to install a solar panel system can now claim the enhanced federal solar tax credit on their federal income taxes for 30% of the installation costs. Meanwhile, the price of the systems has also declined dramatically.

Over the last 12 years, the number of installations and overall solar capacity have grown by more than 10 times. 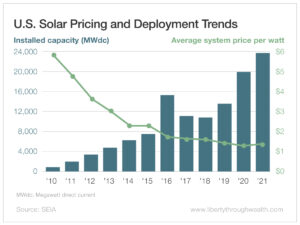 Bottom line: While the overall market might continue to look weak in the coming months, the adoption of renewables will continue to press on. And with solar leading the renewable energy race, this industry offers a great long-term opportunity.

Everything in This Market Is a Little Upside Down