You may be familiar with Fox News personality Tucker Carlson.

He hosts the most watched program on cable TV, Tucker Carlson Tonight, attracting more than 3 million viewers each night.

Those of you who watch Carlson may know that the Fox News host broadcast his show from Budapest, Hungary, last week… and was roundly criticized by the mainstream media for embracing Europe’s only “dictatorial regime.”

As it happens, I am also spending some time in Budapest this summer.

I also know a bit about Hungary. My first language was Hungarian. I lived in Budapest as a child and later worked there as a lawyer and a banker. My late father and I are even co-authors of the Encyclopedia Britannica entry on Hungary.

So, as an American with Hungarian roots, I have a unique perspective on Carlson’s visit.

A Primer on Hungary

Hungary is a small country of just under 10 million people.

Hungarians spent much of their past living under foreign domination. In recent history, Hungary threw off its shackles when it kicked out the Soviets in 1989. The peaceful revolution was led in part by a fiery young student, Viktor Orbán.

Hungarians are an odd lot and readily admit to that description.

When asked about the existence of aliens, Italian physicist Enrico Fermi responded, “They are among us, but they call themselves Hungarians.”

Hungarians are immensely proud of their Nobel Prize winners. In addition, Hungarian students gain admission to Oxford and Cambridge at a higher rate than any other country in central Europe.

The Hungarian language is a remarkably subtle language that rewires your brain to make you think differently.

As George Bernard Shaw put it…

After studying the Hungarian language for years, I can confidently conclude that had Hungarian been my mother tongue, [my work] would have been more precious. Simply because through this extraordinary, ancient and powerful language, it is possible to precisely describe the tiniest differences and the most secretive tremors of emotions.

No wonder Hungarians take it as gospel that the Hungarian translation of Shakespeare is better than the original.

Most recently, Hungary has become the enfant terrible of the European Union under the leadership of Prime Minister Orbán – the same Orbán who helped evict the Soviets in 1989.

As prime minister, Orbán established Hungary as a fiery and independent member of the EU. He has cleverly benefited from the union’s generous reconstruction funds while resisting its liberal values. He has even boasted openly of establishing Hungary as an “illiberal democracy.”

All this has earned him the moniker of being the EU’s only – if democratically elected – dictator.

The World According to Tucker Carlson

Enter into this cauldron of complex history the right-wing media personality.

After hosting his show from the rooftop of a Budapest hotel, Carlson spoke last Saturday at the Mathias Corvinus Collegium conference in Esztergom, a city about an hour north of Budapest. 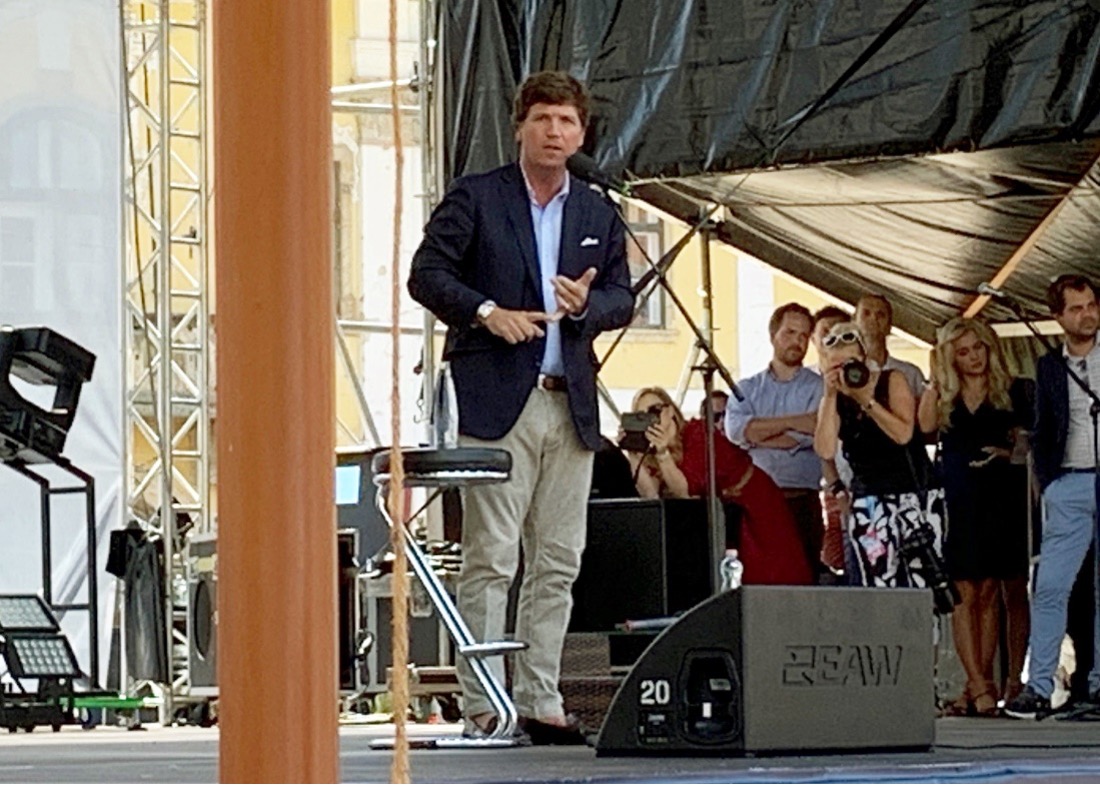 Decked out in his incongruous trademark khaki pants and blue blazer, Carlson said coming to Hungary was the weirdest thing he’d ever done in his life.

He was quick to emphasize that he was a proud American and would never leave the country for good.

But he said that – thanks to the now ubiquitous “cancel culture”- citizens have more freedom in Europe’s only purported dictatorship than they do in the U.S.

He praised Budapest’s clean streets and beautiful architecture. Hungary may be a relatively poor country, he observed, but unlike in San Francisco – home to dozens of tech billionaires – there were no tent cities on the streets.

He praised Orbán’s “Hungary first” resistance to pressure from the EU to open its borders to migrants.

Carlson lauded Hungary’s “wall” (more of a chain-link fence) that he visited with a helicopter during the week. He marveled at the simplicity of Hungary’s border policy.

Immigrants caught climbing the fence are processed within minutes. They are then told to walk through a door adjacent the processing office. What’s behind the door? Serbia.

And sadly, Carlson said, such places are exceedingly rare in the U.S.

A Distorted View of Hungary

Here’s the bad news: Carlson got a sanitized version of Hungary.

His interview with Prime Minister Orbán was a softball interview of the highest order.

Orbán parroted the conservative values that many Midwestern Americans adhere to: the importance of family, law and order, and the absence of homeless people on the streets.

It’s all stuff that any American not on the far-left, critical-race-theory brigade agrees with.

But the reality is far more complex.

The Hungarian government has systematically purged political opposition from all education, cultural institutions and media sources.

It forced Central European University – funded by billionaire investor George Soros – out of the country. It is replacing it with an outpost of Fudan University, which is supported by the Communist Party of China.

Orbán’s cronies have all become multimillionaires purely on the back of government corruption.

Yes, Hungary has a vociferous opposition press. But much like the conservative media in the U.S., its wings are clipped.

The government controls Hungary’s major TV stations, which echo its policies. Watching the government-controlled evening news is not unlike watching CNN or Fox News.

The far-left “woke” philosophy on one hand and the conservative “nation and family first” philosophy on the other hand stem from opposite sides of the political spectrum.

But the methods used by governments to impose their world views are no different.

I was impressed by Carlson’s willingness to come to this strange little country of “aliens.” But knowing Hungarians the way I do, I can’t help but think that he was led through a modern Potemkin village.

(In 1787, Grigory Potemkin created an elaborate ruse to fool Russia’s Catherine the Great. He built facades – Potemkin villages – along the banks of the Dnieper River in Crimea to give the impression of great prosperity in the region. But the reality was very different from what Catherine saw on her brief visit.)

I believe that’s what happened to Carlson.

My point here is not to argue for or against any political philosophy – though I have my biases. I’m just not sure Orbán is the man Carlson thinks he is.

Let me close with my favorite quote from the inimitable political philosopher Lord Acton: “Power tends to corrupt, and absolute power corrupts absolutely.”

That insight holds, no matter what your political stripes.

A Monthly Budget That Will Help You Get Rich

How the Election May Impact Your Portfolio