“It is not from the benevolence of the butcher, the brewer or the baker that we expect our dinner, but from their regard to their own self-interest.”
– Adam Smith

Prior to the Industrial Revolution, economic growth throughout the world was broadly flat. But, as the chart below for the U.K. demonstrates, GDP took off on an astronomic rise with the dawn of industrialization and the modern capitalist economy. 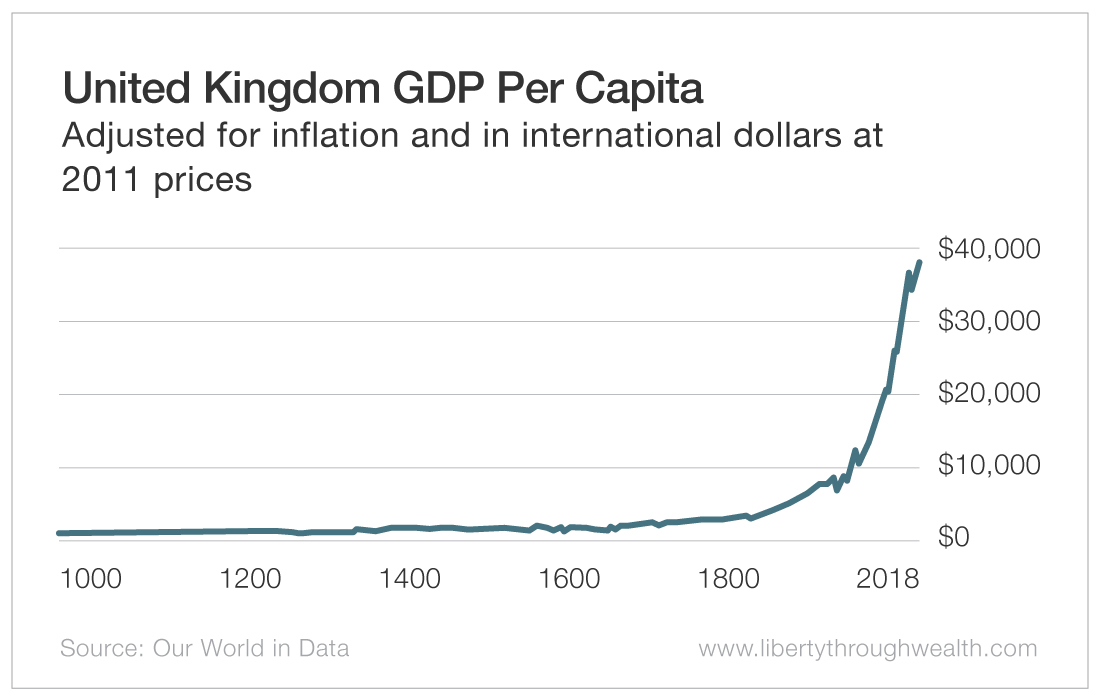 Capitalism has lifted billions of people across the globe out of poverty and generated untold wealth.

As economist Adam Smith said, capitalism centers on the concept of enlightened self-interest – the idea that if we all pursue what’s best for ourselves, things will become better for everyone.

Hayek believed that decentralized individual action and competition among social, legal and economic institutions would achieve better outcomes than attempts to coordinate these activities through centralized control and planning.

The outcome of spontaneous order is never perfect. And it’s easy for ivory tower academics to imagine better results… But it’s the best we humans can do in an imperfect world.

Another central idea of capitalism is the concept of freedom – the freedom to live your life how you want to, as well as the freedom to choose, as Smith would say, your butcher, brewer or baker.

Alas, in the United States, the freedom to choose has steadily eroded over the past decade.

Is America Falling Short of Its Ideals?

For much of its history, America has embodied the values of capitalism more than any other major economic power.

But it’s important to recognize when the U.S. falls short of these long-held ideals. We have fallen short in the past. And we are doing so again today.

It’s only by embracing honest self-criticism that we can right the ship.

In his 2018 book, The Myth of Capitalism: Monopolies and the Death of Competition, Jonathan Tepper offers just that kind of well-intentioned critique. He argues that a handful of large firms now dominate the U.S. economy.

Today’s monopolies and oligopolies rival those of the Gilded Age…

In the late 19th century, J.P. Morgan dominated the banking system. Andrew Carnegie controlled the steel industry. And J.D. Rockefeller was beginning to gobble up his rivals in the oil sector.

How do the lessons of the Gilded Age apply to our current economy?

Tepper argues that U.S. consumers suffer from a lack of options, as they did in the late 1800s.

Today, most Americans buy from just three or four competitors that control the entire market. And Tepper offers some eye-opening statistics to demonstrate this…

Now, Tepper’s statistics date back to 2018. Since then, the dominance of the Big Tech companies – the stars of the post-COVID-19 world – has only increased.

Apple (Nasdaq: AAPL) and Alphabet (Nasdaq: GOOGL) enjoy a duopoly in smartphone software. Google dominates the search engine market, accounting for more than 90% of global search queries. Facebook (Nasdaq: FB) has a 70% share of the social media market, based on total users and site visits.

On top of all that, the advertising duopoly of Google and Facebook has no credible competition.

Is it any wonder that these tech giants are among the most valuable companies on the planet?

Much like their Gilded Age predecessors, each works hard to appear benign. But that facade is crumbling more with each passing day.

The Death of Fair Competition

Many small businesses in the U.S. are held hostage by the whims of Google, Facebook and Amazon.

Today, entry-level employees in Silicon Valley have the power to crush your small business if they want to. Their actions are entirely unregulated.

This serves as a reminder of an essential but underappreciated fact: Yes, we can believe in the virtue of competition. But, as with any sport, we need referees.

In capitalism, we need a referee to enforce the rules of fair competition. But today, the actions of that referee – the government – are fettered by an army of Washington lobbyists.

And an astonishing 94% of congressmen and congresswomen who oversee privacy and antitrust issues received money from a Big Tech political action committee or lobbyist.

To stick with the sports analogy…

It’s as if an NFL team spent much of the year wining and dining the NFL officials.

If you believe in capitalism, free markets and competition… the oppressive power of a handful of tech companies should worry you.

Less competition is always bad for consumers. With no real competition, consumers are not – to use free market economist Milton Friedman’s famous phrase – “free to choose.”

So what’s missing from American capitalism?

As much as I distrust the government to do anything well, we need more “referees” to face the unbridled power of Big Tech monopolies.

And that’s something on which Americans of all political stripes should agree.