When the history of the 2010s financial boom is written, one acronym will stand head and shoulders above the rest: FAANG.

Jim Cramer, host of CNBC’s Mad Money and the founder of TheStreet Inc., originally coined the term “FANG” in 2013. Investors added Apple to the lineup in 2017.

You may also know that these stocks have been among the U.S. stock market’s best performers since the post-“Great Recession” secular bull market began in 2009.

The FAANG stocks’ remarkable growth has been driven by everything from exploding e-commerce and ubiquitous mobile devices to 24/7 streaming entertainment.

The FAANG are widely recognized as being among the fastest-growing, most innovative and most successful large companies globally.

To question their continued dominance borders on investment heresy.

Anytime an investment theme attracts such uncritical adulation, my contrarian instincts kick in.

I am naturally suspicious of investment fads. That’s because I know financial history all too well.

In the January issue of The Oxford Communiqué, I predicted that the FAANG stocks would inevitably lose steam.

But I do know that they will be very different from today’s.

It’s easy to forget that each decade has its “buy and hold forever” stocks.

Investors felt the same way about Japanese stocks in the 1980s.

But it was a Chinese company far from Silicon Valley – PetroChina (NYSE: PTR) – that first reached that record in 2007.

Of course, these companies are still around.

But today, Cisco has a market cap of $220 billion. And PetroChina is worth a mere $112 billion.

After the bubbles surrounding these stocks burst, investors came to value them far less than they did decades ago.

I expect most of the FAANG stocks will suffer a similar fate.

In fact, the obsession with FAANG stocks may have already started to wane.

And this past quarter may have signaled a turning point.

FAANG Stocks Are Losing Their Bite

Let’s look at some charts to see how the FAANG stocks have fared over the past few years.

To illustrate this, I will use the NYSE FANG+ Index launched by the Intercontinental Exchange in November 2017.

The first chart depicts the performance of the NYSE FANG+ Index versus that of the S&P 500 and Berkshire Hathaway (NYSE: BRK-B) since the launch of the index about 3 1/2 years ago. 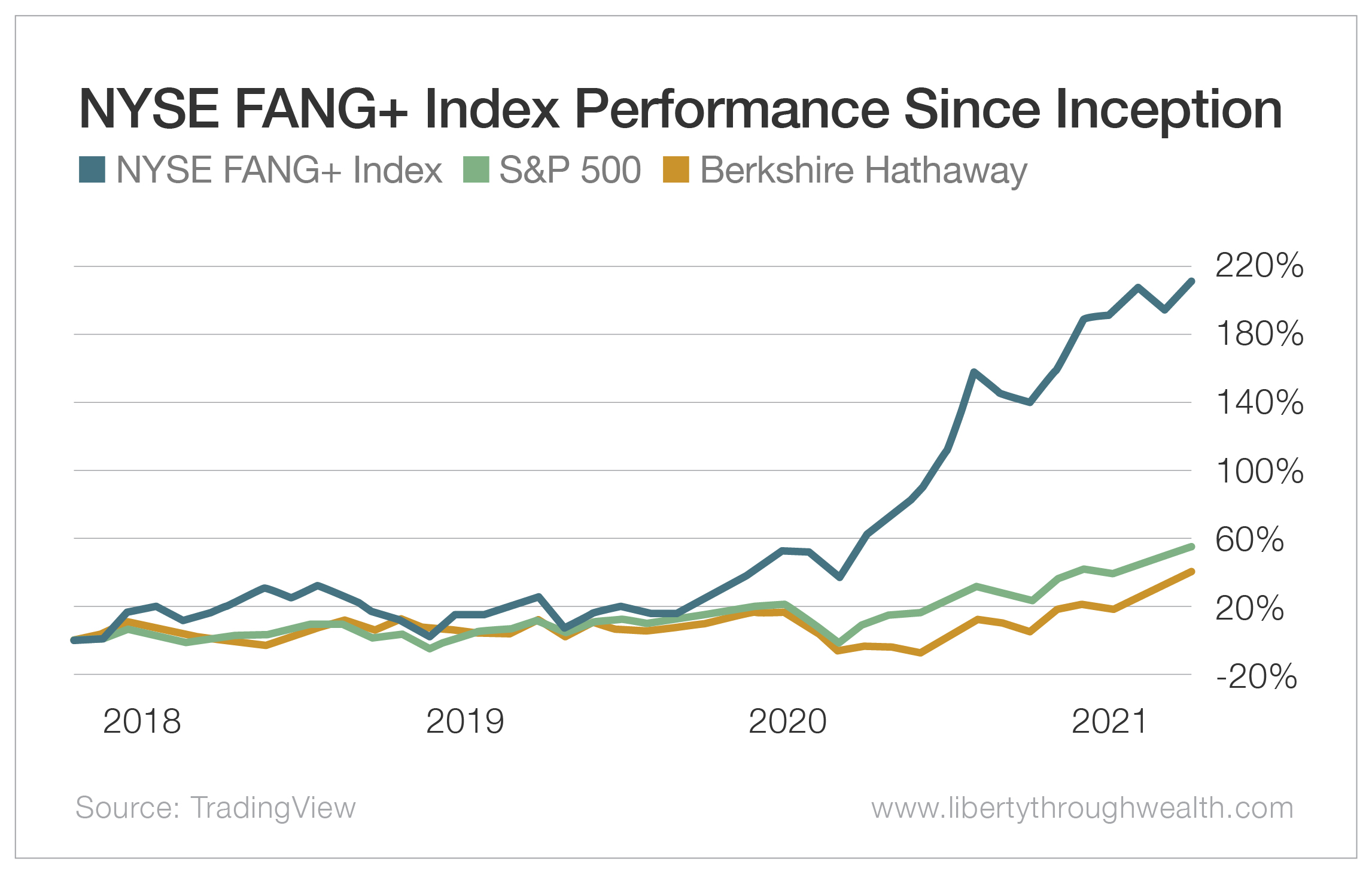 Two things stand out to me.

First, the NYSE FANG+ Index massively outperformed the S&P 500 since the end of 2017.

Second, Warren Buffett’s Berkshire Hathaway trailed the S&P 500 over this same period. Indeed, Buffett has lagged the S&P 500 for the better part of a decade.

The reason for this is no secret. Buffett is famous for his reluctance to invest in technology stocks.

The big exception is Buffett’s massive investment in Apple. Ironically, Apple turned out to be Buffett’s largest and most successful investment ever.

Now let’s compare the performance of Berkshire Hathaway with that of the S&P 500 and FANG+ index over the last three months. 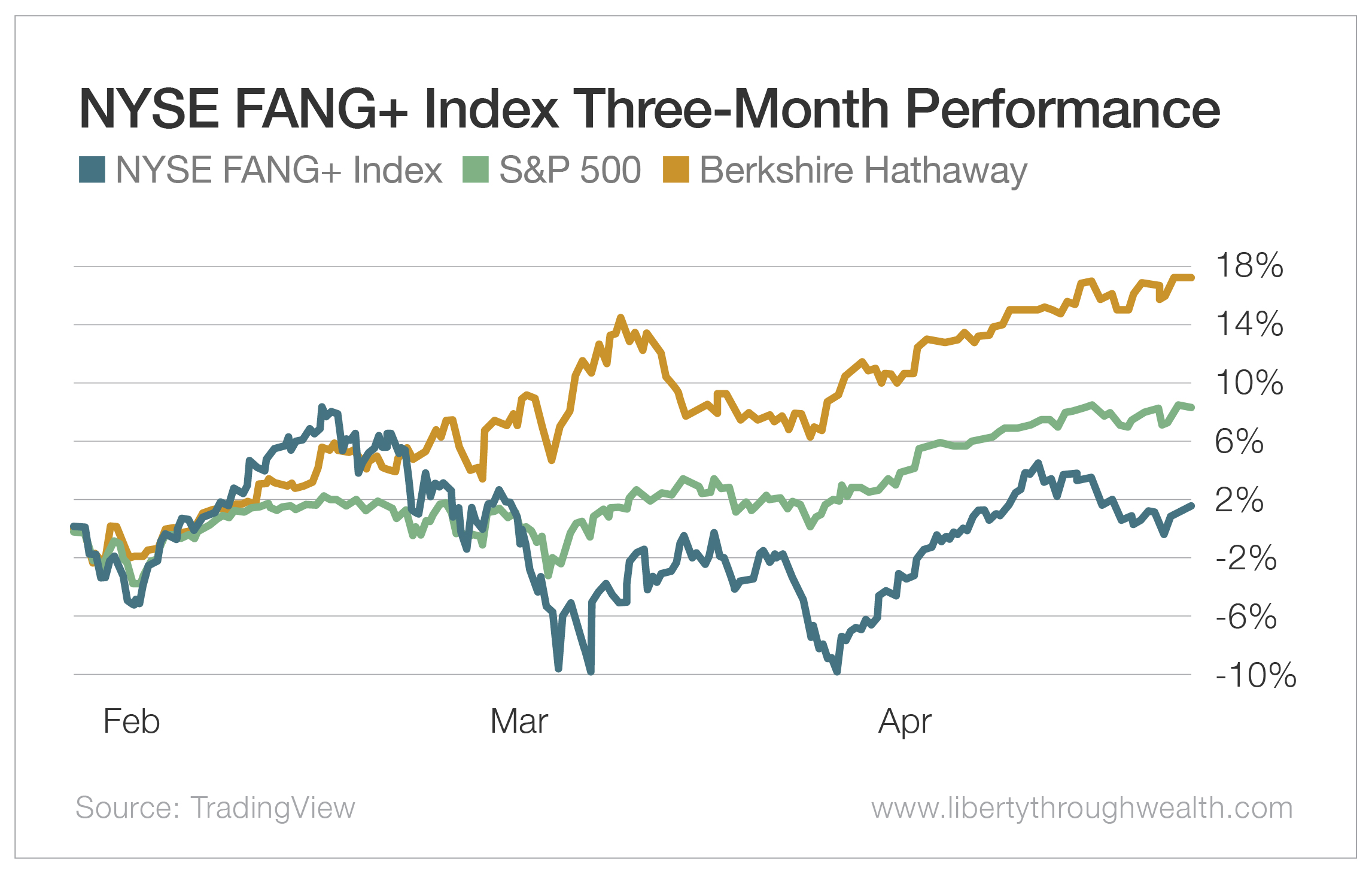 But the FANG+ Index is down by a little more than 1%.

Both the S&P 500 and the FANG+ Index trail Berkshire Hathaway’s impressive 17.6% return over the last 90 days.

Is History Repeating Itself?

Now, a single quarter of outperformance is not a lot to hang your investment hat on.

That said, Berkshire has a strong track record of outperforming at the end of previous “new era” tech booms.

Critics panned Buffett for missing out on the internet stock boom of 1999 and 2000.

On December 27, 1999, Barron’s published a piece titled “What’s Wrong, Warren?” which suggested, “Warren Buffett may be losing his magic touch.” 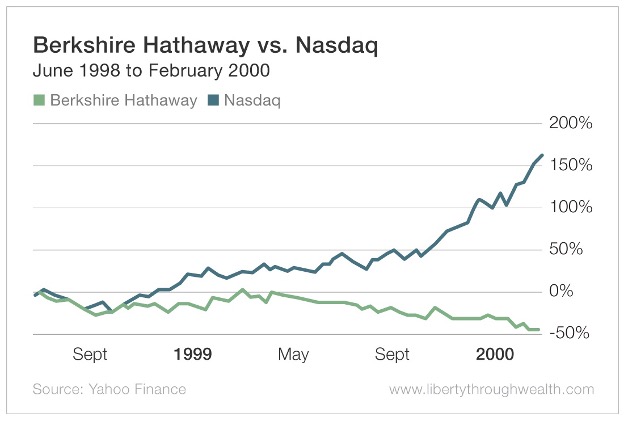 But Buffett had the last laugh.

In the two years after the bubble burst, Berkshire soared 77% while the Nasdaq tumbled 62%.

Could this past quarter’s performance signal the beginning of a similarly strong era of outperformance by Berkshire Hathaway?

I cannot say for sure. But in my view, it’s only a matter of time.

History may not repeat itself. But it does rhyme. 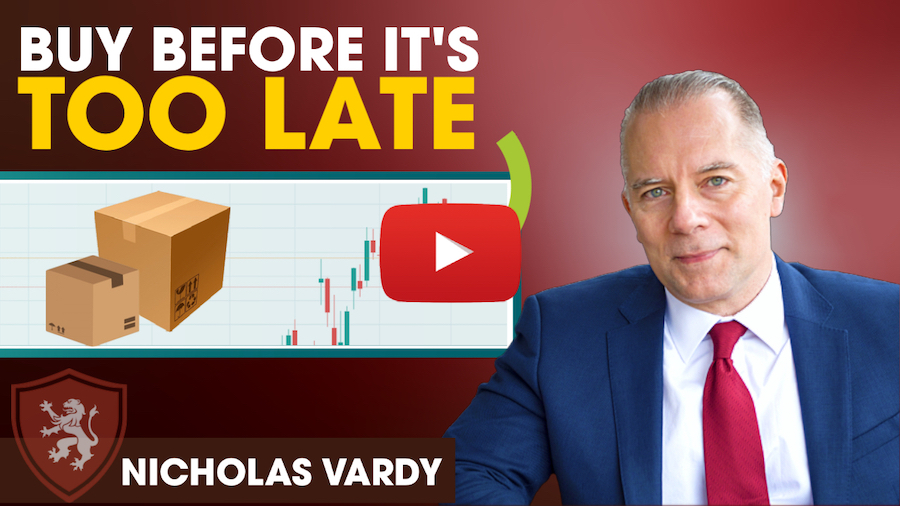