Editor’s Note: As Nicholas Vardy points out in today’s article, Brazil is one of the best bets (at least in the short term!) in an increasingly challenging investing environment.

But what’s your plan for the long term?

He shared what Bill calls “the best new way to build wealth in America.”

Alex revealed how to get his #1 stock right now – what could be a perfect long-term opportunity for your portfolio.

If you’d like to learn how to build wealth to live a life of freedom, click here.

Brazil’s stock market has been crushing it.

The iShares MSCI Brazil ETF (NYSE: EWZ) ranks first among the 47 global stock markets I track daily, up 33% in 2022 alone.

And there is more where that came from.

I believe that Brazil will continue to rally in an otherwise turbulent 2022 for investors.

A Quick Primer on Brazil

“Wow! Brazil is big!” exclaimed then-President George W. Bush after Brazil’s president at the time, Luiz Inácio Lula da Silva, showed him a map of the country during a visit to the White House in 2005.

Put another way, Brazil is about 90% the size of the U.S. And Brazil’s population of 215 million is equal to the United Kingdom, Germany and France combined. And it is rich in some of the most valuable commodities on the planet.

But it was never Brazil’s potential that was in question.

It’s just that Brazil has always overpromised and underdelivered.

As Charles de Gaulle famously quipped, “Brazil is the country of the future… and always will be.”

That was an overly optimistic view, reflecting Wall Street’s collective ignorance of the importance of a country’s culture and history.

Brazil has epitomized the roller coaster of Latin American economies for generations.

Fifty years ago, Brazil was one of the most rapidly growing economies globally. Its economy grew at a China-like 11% a year on average between 1970 and 1974.

A sharp economic slowdown followed this period of rapid expansion. For much of the 1980s, Brazil’s economy grew by less than 1% a year. And the country became the poster child for the Latin American debt crisis.

Brazil’s economic fortunes seemed to change overnight after the turn of the millennium. Then, with the election of left-leaning President da Silva in 2002, Brazil was on a roll.

During da Silva’s early tenure, Brazil ran both a fiscal and a trade surplus. It paid off foreign creditors early and became a net creditor. Da Silva attributed his country’s turnaround to a “higher power.”

As it turns out, Brazil’s economic fortunes between 2002 and 2008 were closely linked to the bull market in commodities.

And once the commodities market crashed, so did Brazil’s economy.

Brazil quickly reverted to its status as an economic laggard.

But the story that 2022 is telling is quite different.

Investors making a long-term bet on Brazil’s future have had their heads handed to them.

Consider that the iShares MSCI Brazil is trading at a level it first hit in 2005.

Yet investor sentiment toward Brazil has shifted remarkably. 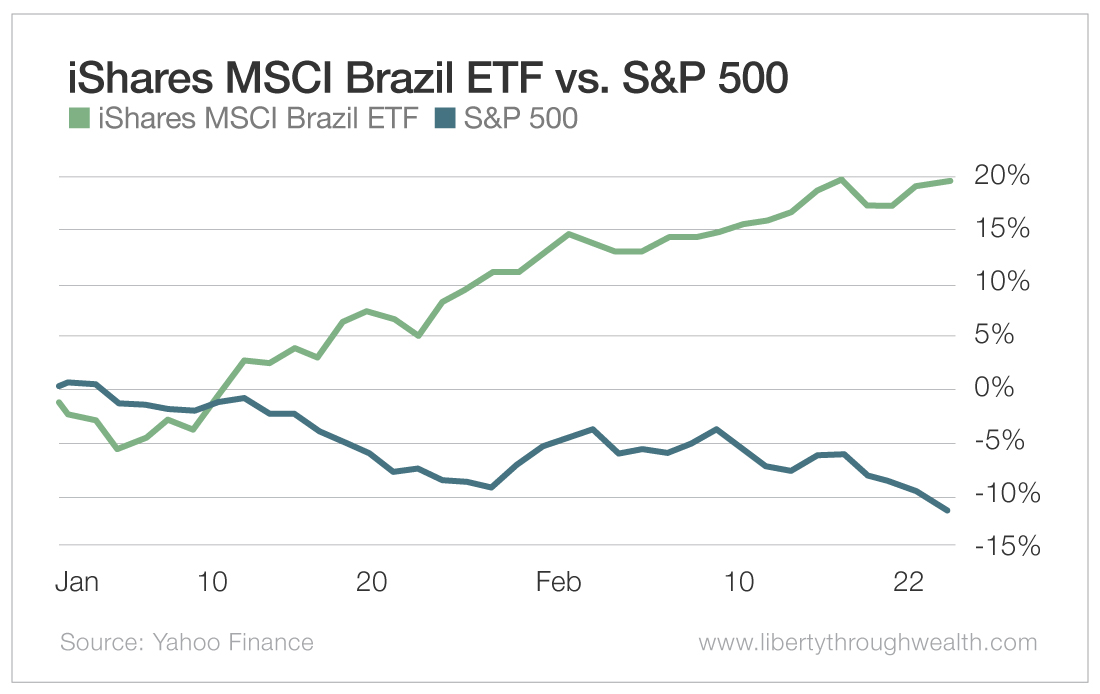 So what’s behind the recent rally in Brazilian stocks?

Thank the one-two punch of the current inflationary environment and the Brazilian market’s significant weighting in commodity stocks.

Brazil is a major producer of raw materials like iron ore, soybeans and petroleum.

In short, Brazil boasts precisely the kind of commodity producers that thrive in an inflationary environment.

Emerging market investors have made and lost a fortune investing in Brazil over many decades.

The same will happen this time.

That said, if you maintain a trader’s perspective, you can make a lot of money in Brazil over the coming months and maybe even years.

What gives me confidence that today is a potentially good entry point?

Here I rely on the analysis provided by SentimenTrader.

Why does this matter?

In the past, when this indicator turned back above zero, it marked important long-term turning points in Brazilian stocks.

A year after the shift – on average – the Brazilian index showed a remarkable average gain of more than 65%.

Over the long term, I agree with Charles de Gaulle about Brazil.

So don’t ever think of Brazil as a long-term investment.

Brazil is one of the best bets in an increasingly challenging investing environment.

How to Take Your Net Worth From Zero… to Seven Figures

How to Profit From the Biggest Bubble of...

Rising Stocks… and the Fire Ant Theory of...