The five years before the financial crisis of 2008 were a golden age for emerging markets investing.

Between 2003 and 2007, emerging markets were the top-performing asset class in the world.

This was the era of the BRICs – Brazil, Russia, India and China – an acronym Goldman Sachs analyst Jim O’Neill coined in 2001.

The BRICs would dominate the global economy by 2050.

It was a compelling story.

But pat yourself on the back if you never bought into the investment hype.

The iShares MSCI BRIC ETF (NYSE: BKF) – a pure play on the BRIC stock markets – was launched in November 2007 at the tail end of the noughties emerging markets boom.

Had you invested at the launch of this BRIC ETF, you’d have lost 30% of your investment over the past 11 years. 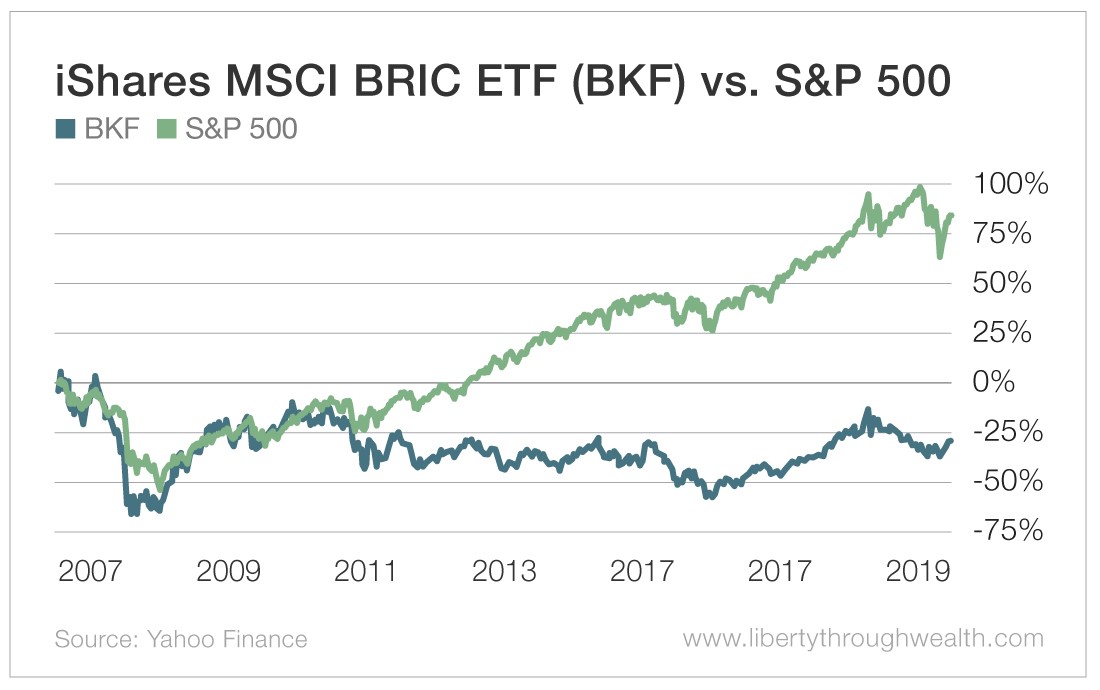 Are Emerging Markets Back?

Emerging markets have lagged the U.S. markets badly for nearly a decade.

But here’s the good news.

When emerging market stocks enter a bull market, they’ll do so in a big way.

And recent action in emerging markets suggests they may be on the verge of doing just that.

Let’s examine the three factors I consider before investing in any market: fundamentals, technicals and market sentiment.

Stop me if you’ve heard this argument before: International stocks are a bargain compared with U.S. stocks.

World-class companies are trading at a fraction of U.S. stock market valuations.

The big-picture valuation of global stock markets is equally compelling.

Of course, the risks in emerging markets are always higher.

After all, China and Hong Kong together make up almost 30% of the MSCI Emerging Markets Index.

Chinese companies alone account for six of the top 10 companies.

Do you really want to bet on a slowing economy involved in a trade war with the U.S.?

The answer may surprise you.

Perhaps the most popular way to define a bull market is to look at a market’s 200-day moving average.

As it turns out, the MSCI Emerging Markets Index just broke above this critical level. (Major U.S. indexes like the S&P 500 and Nasdaq remain below this crucial level.)

There is no sugarcoating it: The average U.S. investor hates emerging market stocks.

And with the gap in returns between U.S. and international stocks near the widest level in 14 years, can you blame them?

Yet anytime I see such extremes in sentiment, I have to wonder: Are we at “peak pessimism”?

If so, the time may be ripe for emerging markets to enter into a bull market.

Throw in the prospect of a negotiated trade deal between the U.S. and China in the coming months…

And emerging market stocks across the globe could take off like a rocket.

Much like risky bets on biotechnology, emerging markets are a boom or bust asset class.

When emerging markets are hot, investors pile in and drive prices sky-high.

When they’re not, it’s best to stay away.

But if you believe we’re in a bull market, you might as well swing for the fences.

And the best way to do that is with a leveraged emerging market ETF.

It’s chalked up a gain of 15.2% since my initial recommendation on January 9.

If emerging markets have indeed entered a sustained bull market…

I will be recommending more ETFs like this one to Oxford Wealth Accelerator subscribers in the months ahead.

How to Bet Big on the Bounce

Why Henry Ford Was Wrong About History

My Journey Into Technical Analysis