Editor’s Note: In today’s article, Nicholas Vardy discusses a sector that has soared almost 50% in the past 12 months. Paired with the current state of market volatility, this sector could be your best bet in an inflation-ridden market.

And if you’re interested in discovering other inflation-proof stock strategies, join us online for our 24th Annual Investment U Conference – streaming LIVE from San Diego April 28-30.

You’ll hear directly from Alexander Green along with some of your other favorite Oxford Club analysts, including Chief Income Strategist Marc Lichtenfeld, Chief Trends Strategist Matthew Carr, Engineering Strategist David Fessler and so many more…

Not only will these strategists discuss the current “Everything Bubble” and answer your questions about what it means for YOUR money, but they will also reveal their best investment ideas for profiting from inflation surges.

For much of the past two years, cryptocurrencies, disruptive technologies and meme stocks were all the rage.

But that all changed by the second half of 2021.

The bubbles in many of these speculative assets have already burst. Some stocks have already fallen by 70% or more from their peaks.

But much like generals always fighting the last war, investors are focused on the glory days of 2021.

Alas, they are doing so with increasingly less success.

Yet there is another bull market out there…

And it’s one that I wrote about in February of last year.

It has already soared by about 50% over the past 12 months.

More importantly, I believe it will continue to surge over the coming 12 months.

Usually, when a stock or other asset rises by 50% or so, investors pile in.

Yet that’s not the case with agriculture.

The reason is simple…

Agriculture is the quintessential opposite of a new whizbang disruptive technology stock.

After all, wheat, corn and sugar have been all around us since the Agricultural Revolution in Mesopotamia in 6000 B.C.

You find them in the most basic foods we eat – the wheat in your bread… the corn in your cereal… the sugar in your coffee.

Agricultural products are so familiar that we don’t consider them as possible investments.

Yet that does not mean you can’t make money by investing in agriculture.

In fact, agricultural commodities are in the midst of a rip-roaring bull market.

And unlike, say, the inflationary 1970s when agricultural commodities were off-limits to those who could not trade futures…

Today you can invest in this red-hot sector at the click of a mouse… and it’s only about to get hotter.

The Bull Market in Agriculture

Walk into any U.S. supermarket, and you see shelves bursting with food.

So it’s hard for the average U.S. investor to appreciate the importance of a stable food supply.

Yet that may be about to change.

And Russia’s invasion of Ukraine is particularly to blame.

It turns out that these are two of the most important producers and exporters of agricultural commodities in the world.

Russia and Ukraine collectively account for about 25% of global wheat exports.

The war-induced supply crunch has resulted in the price of wheat rising by more than 50% since the invasion.

Then there is the decidedly less sexy – but equally important – issue of fertilizer.

Yes, Russia was until recently the second-largest foreign exporter of fertilizer to the U.S., providing 10% of the total supply. And the war has cut those supplies off.

But the fertilizer crunch isn’t just a result of the conflict between Russia and Ukraine.

As the U.S. Department of Agriculture recently put it…

Fertilizer prices have more than doubled since last year due to many factors including [Vladimir] Putin’s price hike, a limited supply of the relevant minerals and high energy costs, high global demand and agricultural commodity prices, reliance on fertilizer imports, and lack of competition in the fertilizer industry.

Farmers in America’s breadbasket say price gouging is part of the problem. Nutrien, for example, reported a 51% increase in the cost of goods for nitrogen production (a key fertilizer input) in the third quarter of 2021.

Farmers are already using less fertilizer because of prices. That will result in lower production of wheat, corn and other agricultural staples.

Add all these factors together, and the conclusion is inevitable… The price of agricultural commodities will continue to soar.

How to Bet on the Agriculture Bull

So what’s the best way for investors to profit?

One way is to bet on the Elements Linked to the Rogers International Commodity Index – Agriculture Total Return ETN (NYSE: RJA).

Sponsored by Jim Rogers – the commodity investment guru and George Soros’ first investment partner at the infamous Quantum Fund – the note represents the value of a basket of 21 agricultural futures contracts.

The Elements Rogers ETN gets this exposure by investing in near-term front-month futures contracts and rolling expiring contracts into the next-nearest month. 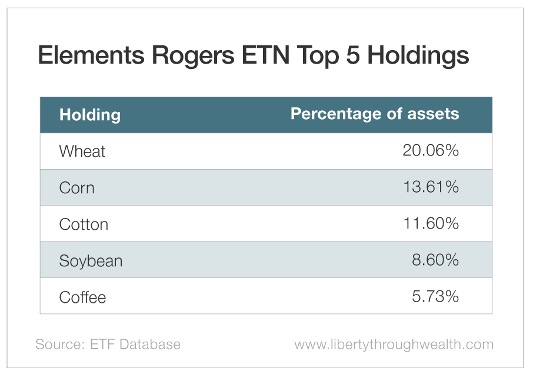 The note’s top five holdings include wheat, corn, cotton, soybeans and coffee, which make up 59.6% of the fund.

As the chart below reveals, the Elements Rogers ETN has also crushed the S&P 500 over the past 12 months, accelerating its outperformance over the past three months. 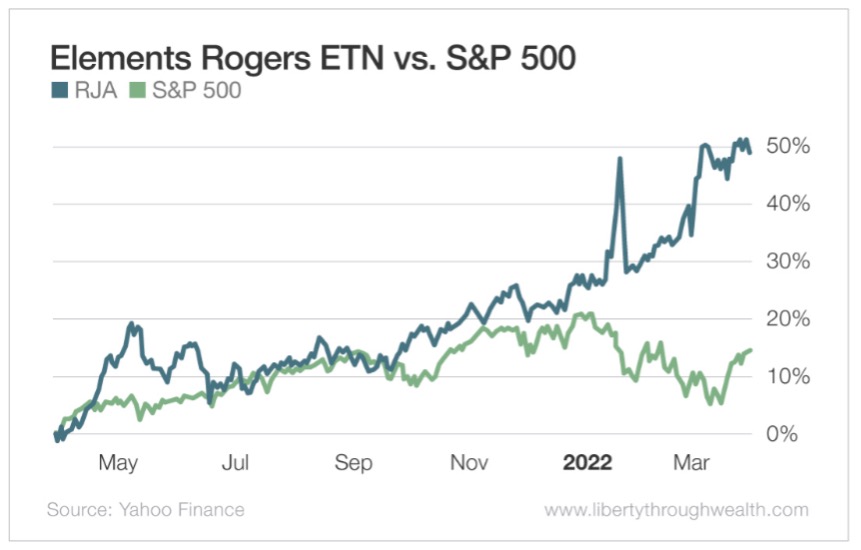 Finally, since the Elements Rogers ETN is structured as an exchange-traded note (ETN), it avoids K-1 distributions, which are a pain at tax time.

Dump your speculative stocks on any short-term rebound.

Bet on old-fashioned agricultural commodities instead.