While investors should consider steering clear of certain innovative stocks, there is another set of stocks that warrants your attention.

Studies have shown that dividend stocks have outperformed the broad market by 222% over the past 60 years. Despite that, many high-quality dividend-paying stocks are trading at a discount.

In Chief Income Strategist Marc Lichtenfeld’s FREE Ultimate Dividend Package, not only will you learn how to lock in an ultra-safe 9% yield, but you’ll also learn about the safest 8% dividend in the world.

Click here to learn more about this FREE package.

Most of today’s trading on Wall Street is done by sophisticated quantitative algorithms.

Quant PhDs (“the rocket scientists of Wall Street”) who program these algorithms ignore the lessons of market history.

After all, history offers some of the most valuable lessons for successful investing.

And one of those lessons is this: Even the best business in the world can be a terrible investment if you buy it at the wrong price.

Learning this lesson turned Warren Buffett into the world’s most successful investor.

And one of the best examples that illustrate this is the fate of information technology hardware, software and networking equipment giant Cisco Systems (Nasdaq: CSCO).

The Rise of Cisco Systems

Cisco Systems was founded in December 1984 by two Stanford computer scientists. The husband-and-wife team had developed a technology that connected all computers on the Stanford campus – a novel idea at the time.

Fast-forward 10 years, and Cisco found itself at the intersection of several technological trends, all linked by Cisco’s networking technologies.

The tech boom was in full swing.

And Cisco was there to sell the picks and shovels to all the players in the internet gold rush.

By 2000, Cisco had become one of the hottest stocks on the U.S. stock market.

At the peak of the dot-com bubble, Cisco surpassed Microsoft to become the most valuable company in the world.

Some analysts even predicted Cisco would become the world’s first trillion-dollar company.

Then came the dot-com bust.

Over the next two years, Cisco’s share price collapsed 80% – wiping out $431 billion in shareholder value.

The Evolution of Cisco Over the Years

After the dot-com crash, Cisco picked itself up and went on an acquisition spree.

By 2007, Cisco claimed that half of internet-connected U.S. households used its Linksys or Scientific Atlanta products.

Cisco then pivoted toward videoconferencing, internet-based voice calls and other Web 2.0 communications.

But the rise of smartphones that could shoot and share videos pulled the rug out from under Cisco’s efforts.

Cisco had built its reputation as an internet hardware company in the 1990s. But hardware has become a commodity that generates little profit.

And today, Cisco, previously known for hardware, now derives a significant percentage of its revenue from software and services.

First, in many ways, investors were right about Cisco.

For all the pivoting of its business model, over the last 21 years, Cisco’s revenues have grown fourfold to $49 billion.

But Cisco’s share price in 2000 was simply too high.

And its stock has never regained its dot-com peak. 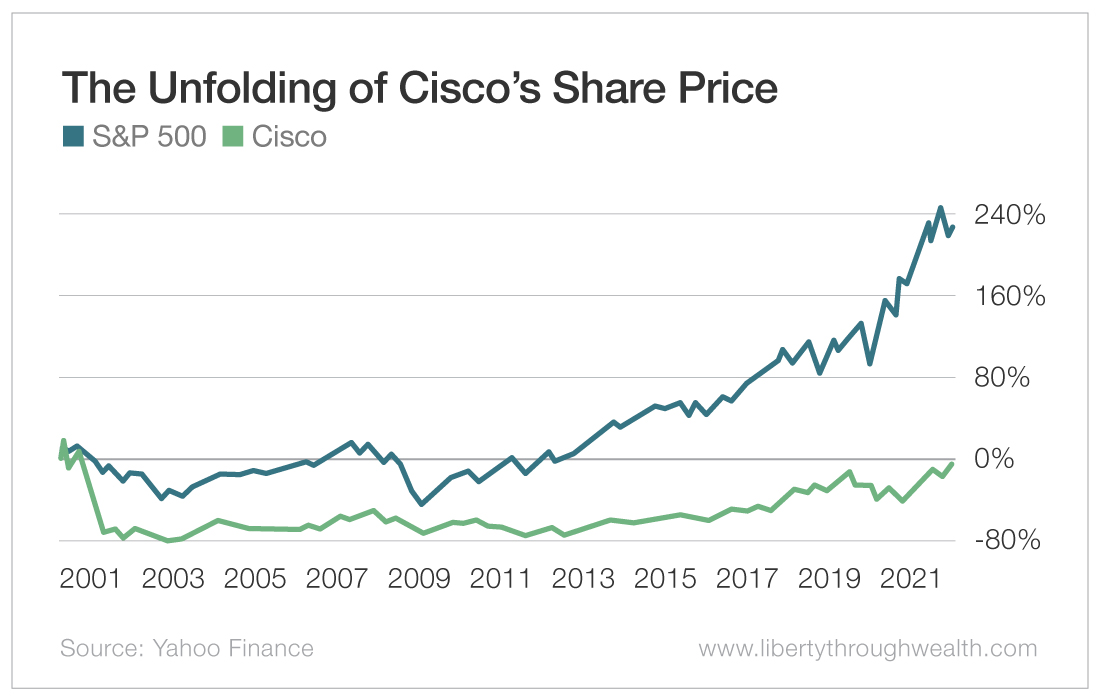 The lesson for investors is this…

A similar fate awaits many of today’s high-priced innovation stocks.

Trading at a P/E of 185, Tesla (Nasdaq: TSLA) is almost as expensive as Cisco was at its peak.

But even if Tesla turns out to be the next Microsoft or Amazon, it’s going to be dead money at best over the next decade or so.

And stick to one of the most important rules of investing: Even the best business in the world can be a terrible investment if you buy it at the wrong price.

P.S. For the details on one of the most innovative and disruptive stocks on the market today – at the right price – sign up for Alexander Green’s Oxford Communiqué. You’ll receive monthly stock recommendations (your first coming this afternoon!) and weekly updates from Alex, timely market insights from me, and much, much more.

How to Save $79 Million on a Contemporary Art Masterpiece