Editor’s Note: It’s no secret that the first quarter of 2022 was a tough one for investors. However, Chief Income Strategist Marc Lichtenfeld shares how upcoming earnings reports could be the catalyst your investments need.

Marc is even coining a new term: “Earnings Aristocrats.”

Earnings Aristocrats are companies that have beaten earnings estimates for 25-plus straight quarters.

And in Marc’s latest presentation, he’ll reveal just how powerful – and profitable – Earnings Aristocrats can be.

In fact, Marc believes some Earnings Aristocrats have the potential to double your investment in under 24 hours this earnings season.

I don’t really pay attention to my long-term investments on a day-to-day basis. These are companies I plan on holding for years, so if they move a couple of percentage points in a day, it’s not particularly noteworthy.

However, for shorter-term investments and trades, I do keep close tabs on them, waiting for a catalyst to cause a sharp move higher.

In fact, I never enter a trade unless I have an idea of what should move the stock. It could be an upcoming earnings report, an important corporate announcement or even a technical breakout on the stock chart.

Earnings reports are one of my favorite expected catalysts.

Companies report results every quarter, so you have four times per year when a stock has the potential for a strong move.

What’s interesting about earnings and stocks’ reactions to them is the company doesn’t necessarily have to make loads of money. All it has to do is beat expectations to see its stock move higher.

Say a company is expected to lose $0.10 per share but it reports a loss of $0.05 instead. Even though the company still lost money, you could see a big jump in the stock price.

Other times, you see share price spike on guidance.

A company may have matched or even missed analysts’ estimates for the past quarter, but if it raises guidance (what it tells Wall Street to expect going forward) for the current quarter or the full year, that may be the catalyst you’ve been waiting for.

Earnings is a bit of a game for companies and Wall Street analysts. Analysts base their expectations on the guidance given to them by CEOs. These executives purposefully don’t raise the bar too high so they can beat expectations and be heroes.

Wall Street typically doesn’t want companies to miss – especially when it has “Buy” ratings on the stocks – because that makes the analysts look bad.

It also makes the companies look bad, and the analysts want the CEOs to be happy with them so they’ll consider the analysts’ firms for their investment banking needs.

If you’re an analyst and you publish sky-high estimates that a company misses and then write a negative report because the company failed to meet your expectations, good luck getting that company to use your firm on its next bond offering or acquisition.

Despite this well-orchestrated dance, stocks can and often do move significantly when companies beat earnings expectations and can fall hard when they miss.

Lululemon (Nasdaq: LULU) is an example of a company whose management knows how to play the game and win. It beat expectations in two of the past three quarters, jumping 11% in September and 10% in March. 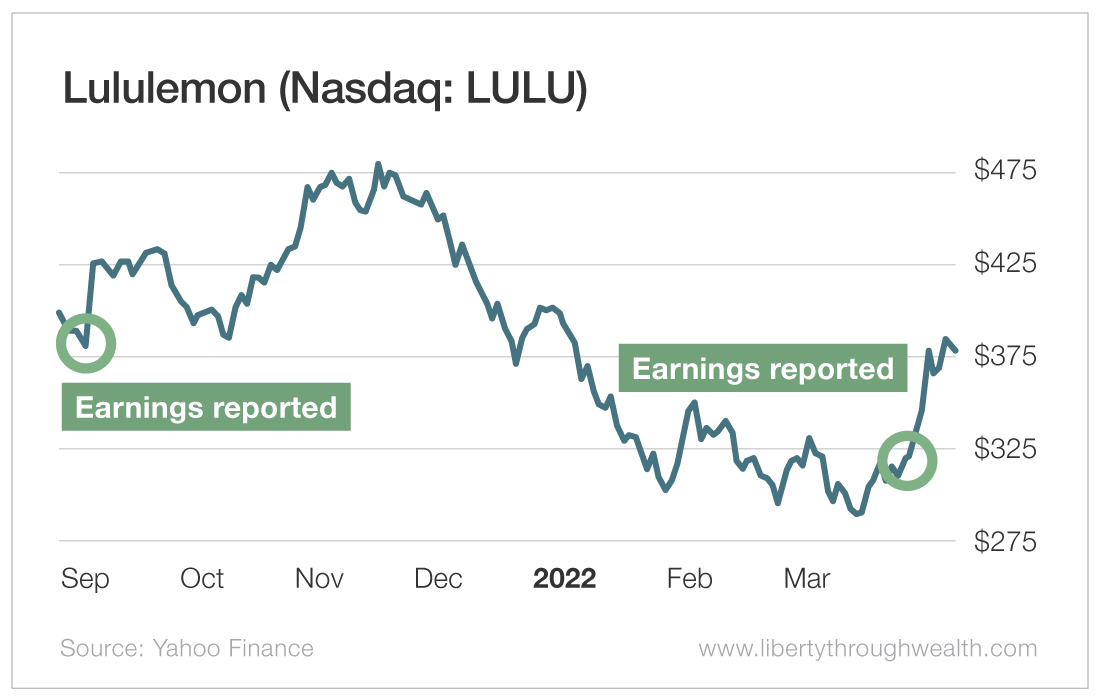 Over the next few weeks, we’ll see many stocks react to earnings reports.

S&P 500 companies are forecast to see a 3.2% increase in earnings for the quarter. This is the lowest level of growth since December 2020. But that’s not a problem. With the outlook so mediocre, that could lead to very large moves in stocks that issue upside surprises.

It’s important to understand the factors that could move your stocks in the next few weeks. First quarter earnings will most definitely be one of them.

Buckle your seat belts. The next few weeks should be a wild ride.