It won a Blue Cross Blue Shield sponsored “Not Impossible Award” for creating new technology for the good of humanity. But it doesn’t stop there… Fortune magazine also featured it in an elite list of companies that will change the world.

Longtime member of The Oxford Club Bill O’Reilly is even calling it “humanity’s next great leap.”

The founder’s perseverance and passion landed him hundreds of millions of dollars in backing, most notably from the Bill & Melinda Gates Foundation… Fidelity… and Baillie Gifford. (Some of the smartest money on the planet.)

Trading for well under $10, this stock could be the opportunity of a lifetime.

Click here to learn more about this revolutionary tech.

I’ve written a lot about Charlie Munger in Liberty Through Wealth.

I recently wrote about why I thought Munger got hustled betting on Alibaba (NYSE: BABA) stock.

As such, Munger is one of the best and most successful stock pickers on the planet.

Today, I want to revisit another one of Munger’s favorite investments…

With his trenchant wit and grumpy manner, Munger is a hard man to please.

Yet there is one company that Munger gushes about: Costco Wholesale Corporation (Nasdaq: COST), the largest U.S. warehouse club retail chain. It’s the same company that has crushed the S&P 500 by almost 3 to 1 over the past five years. 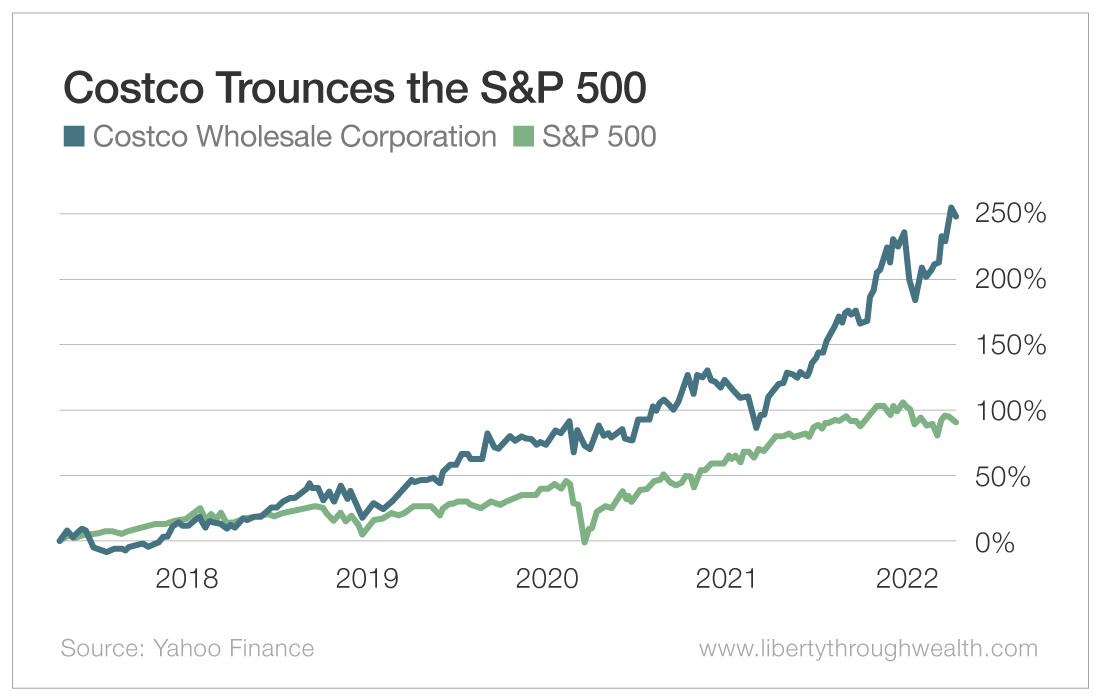 At Berkshire’s annual meeting in 2011, a shareholder asked Munger which single company he admired the most. He cut off the questioner to answer. “That’s easy,” he said. “It’s Costco.”

From another interview in the late 1990s, he explained:

It’s hard to think of people who’ve done more in my lifetime to change the world of retailing for good, for added human happiness for the customer.

Munger later added at the University of Michigan in 2010:

Generally speaking, I believe Costco does more for civilization than the Rockefeller Foundation.

An Overview of Costco

Founded in 1976 and based in Issaquah, Washington, Costco is the second-largest retailer – behind only Walmart (NYSE: WMT).

Costco boasts a $259 billion market cap and $211 billion in annual sales. It operates 815 warehouses, including 564 in the United States and Puerto Rico.

Costco is a unique retailer for several reasons.

First, you’ll never find anything cheaper than you do at Costco. Notably, Costco has long sold gas at a deep discount to lure Costco members to its stores. The idea is that, after filling up, they end up staying to shop at Costco.

Second, you are not just a “customer” at Costco. You are a “club member” who pays an annual fee to gain access to its stores. But even after its yearly fee, Costco is always cheaper than, say, rival Walmart.

Third, probably no other company – not even Apple (Nasdaq: AAPL) with its fanboys – generates the kind of loyalty that Costco does.

Tens of thousands of Americans buy or rent homes based on their proximity to Costco.

A Model of Operational Efficiency

Low-margin retail is a tricky business. With razor-thin margins, it does not take much to push a retailer into the red.

So what makes Costco different?

As a result, Costco stocks only the fastest-selling models, sizes and colors of products.

Costco warehouses carry about 4,000 items compared with the 30,000 found at rival retailers.

Costco has one of the best business models – if not the best – in the retail industry. That’s because it doesn’t make much money selling merchandise.

Instead, Costco earns the bulk of its profits from membership fees. This provides Costco with a steady and predictable base of cash flow every year.

Annual membership fees alone generated more than $3.9 billion in cash last year. That accounts for a big chunk of its $5.5 billion net income in 2021.

And Costco’s 92% renewal rate worldwide confirms that customers are happy to stick with the company.

As a result, investors can be confident that Costco will generate a profit under all economic conditions.

Munger once described Jim Sinegal, then-CEO and founder of Costco, as “one of the most admirable retailers to ever live on this planet.” That’s because Sinegal and Costco put customers first.

Costco shareholders are also near the top of this list.

In 2019, Costco authorized a $4 billion share buyback program. Over the previous eight years, it had repurchased an average of $500 million in shares annually in addition to paying out dividends.

Today, Costco is trading close to its all-time highs. The stock has gained just about 15% over the past month.

That said, a great company does not always make a great stock.

The question for investors is whether Costco is worth the price.

The world has figured Costco out, which is why it trades at 25 times earnings. If you’re comfortable with that, Costco is one of the most admirable capitalistic institutions in the world.

After its recent run-up, Costco now boasts a price-to-earnings (P/E) ratio of about 48.

By comparison, the retail sector trades at an average forward P/E of just under 20.

Costco may be a steady and reliable company growing its revenues and profits at roughly 10% a year, but paying 48 times earnings for that kind of growth is rich indeed.

Yes, Costco is a terrific company. And the stock has a lot of short-term momentum behind it.

At the same time, Costco is just about as expensive as it’s ever been.

So it might make sense to wait for a pullback to its historical average P/E of around 25 before buying the stock.

On this, I’m sure Charlie Munger and I would agree.

How Wayne Gretzky Can Make You a Better Investor

“The Greatest Story That No One Knows”

What Rip Van Winkle Can Teach You About...