How to Protect Yourself Through Times of Inflation

But Matt reminds investors that there is still plenty of opportunity to protect your income – while increasing your wealth – through both stocks and gold.

And as Alexander Green says, “Nothing outperforms common stocks over the long haul.”

That’s why Alex and longtime Oxford Club Member Bill O’Reilly are sharing the details on four stocks that could lead to major profits in just two years.

The two sat down to talk about Alex’s next wealth-creating prediction. The conversation left Bill stunned.

Although inflation isn’t going away anytime soon, Alex and Bill discuss four breakout “buy now” sectors that could lead to massive growth in the years to come.

Just this week, the U.S. Bureau of Labor Statistics reported that consumer prices rose 8.5% in March year over year.

While many see that as the likely peak for this inflationary cycle, nothing is certain.

Keep in mind that last spring, when inflation started rising sharply, the Federal Reserve maintained it was merely “transitory” and would quickly dissipate.

That didn’t happen, unfortunately, and the Fed finally “retired” the somewhat embarrassing term in December.

As you can see in the chart below, it’s been exactly a year since consumer prices began rising at a pace significantly higher than the Fed’s target of 2% to 3%. 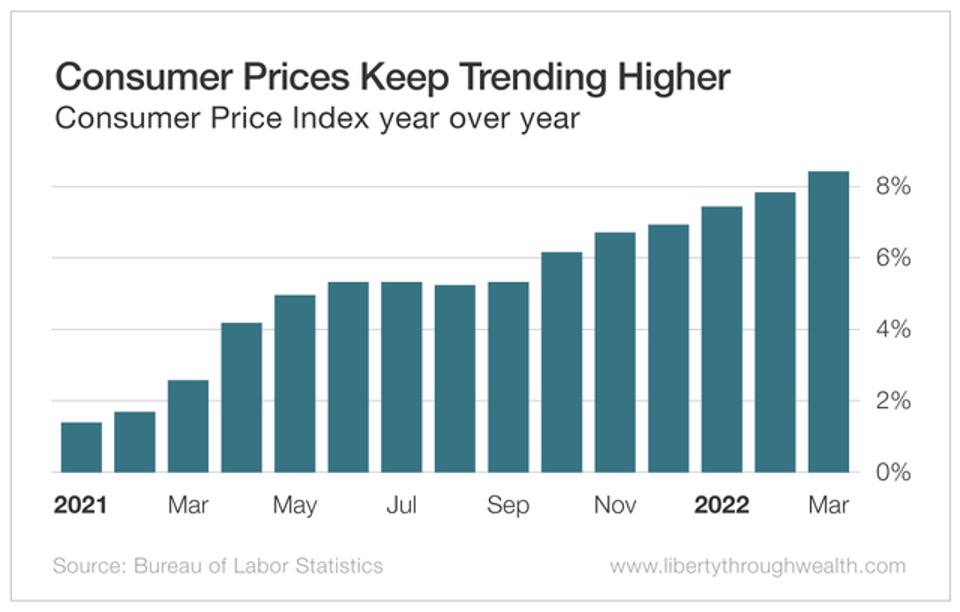 The Fed Digs In

The Fed is now focused on bringing inflation back down to a reasonable level – say, below 4%.

It raised its target interest rate – the federal funds rate – a quarter point at its March meeting. And most Fed watchers expect another half-point hike at the upcoming May meeting.

But interest rate hikes work with a time lag, so higher inflation could persist for some months yet, eroding the purchasing power of our money and decreasing our real income.

The question for investors is, how can we protect ourselves from it?

Well, stocks are actually a good hedge against inflation – especially stocks of companies that have pricing power. That is, those that can successfully pass their rising costs on to their customers without significantly decreasing demand for their products or services.

That said, it’s becoming pretty clear that somebody, somewhere has to pay the cost of taming inflation.

It’s not a free ride. And the policymakers at the Fed would rather it not come at the cost of higher unemployment.

So this time around, stock and bond markets may have to take the first hit.

“One way or another, to get inflation under control, the Fed will need to push bond yields higher and stock prices lower,” says William Dudley, former President of the New York Federal Reserve Bank and vice chairman of the Fed’s Federal Open Market Committee (which is responsible for setting interest rates).

In fact, this has already happened to some extent.

The S&P 500 is down 7.7% this year, and bond yields are up significantly (meaning their prices are down).

But unless you’re very close to retirement or will need to liquidate your portfolio for some other reason, holding stocks through a downturn is still smart.

The Real Question Is, Gold or Crypto?

There are two other asset classes investors are clambering to for shelter from inflation: gold and crypto.

Gold is an age-old store of value. And in the current inflationary cycle, it’s working quite well.

The yellow metal has gone up nearly 13% since inflation started rising a year ago. That’s almost twice the performance of the S&P 500 over that time.

And then there’s “digital gold,” or cryptocurrencies.

Many claims have been made that these digital assets are the way to hedge against ballooning government budgets and weakening currencies – especially in times of inflation.

After all, cryptos can’t be manipulated by profligate and reckless governments. And because they’re such distinctive assets, they should move entirely independently of other assets like stocks and bonds, helping to diversify your portfolio.

And how have cryptos done since inflation appeared a year ago?

According to Bloomberg, the correlation between Bitcoin and the tech-dominated Nasdaq 100 index is about 0.7, which means they basically move up and down together.

So much for diversification.

If you’re looking for protection from inflation, invest in a lot of good stocks and a bit of gold.

And maybe skip the crypto.