How Investing in Liberty Will Boost Your Portfolio

Editor’s Note: Today we are excited to introduce Liberty Through Wealth’s newest contributor, Senior Markets Expert Matt Benjamin. Although new to this publication, Matt has been a part of The Oxford Club’s team for years and has even served as the Club’s Editorial Director.

Matt’s résumé speaks for itself. He has worked as an editorial consultant to the International Monetary Fund, the World Bank, the Economist Intelligence Unit and other global macro institutions.

For several years he was the head of political economy for a Financial Times-owned macroeconomic consulting firm, advising hedge funds around the world.

Now he will be sharing his thoughts on the market with Liberty Through Wealth readers.

And in today’s article, Matt shares the effect investing in economically free nations can have on your portfolio.

Because after all, there’s no better way to build wealth than through liberty.

Freedom and liberty matter… more than you might think.

We’ve written a lot over the years at Liberty Through Wealth about how successful investing can give you the freedom to live the life you want. In fact, that idea is the origin of our name.

Yet over the past year, many investors have learned (some the hard way) that the causation arrow goes the other way too.

That is, investing IN freedom and liberty can boost your portfolio’s performance.

We can see that by considering nations that are economically unfree.

They lack many of the fundamental human and economic freedoms that we in the West take for granted: property rights, rule of law, and the ability to trade and make contracts, plus the basic freedoms of speech, association, religion and assembly.

To be sure, there is no simple “free or unfree” dichotomy.

There is a spectrum that ranges from very economically free nations, like the U.S., Japan and much of Europe, to not very free nations, including China, Russia, and parts of the Middle East and Africa.

The Fraser Institute produces an annual report on economic freedom around the world, which is depicted in the map below. 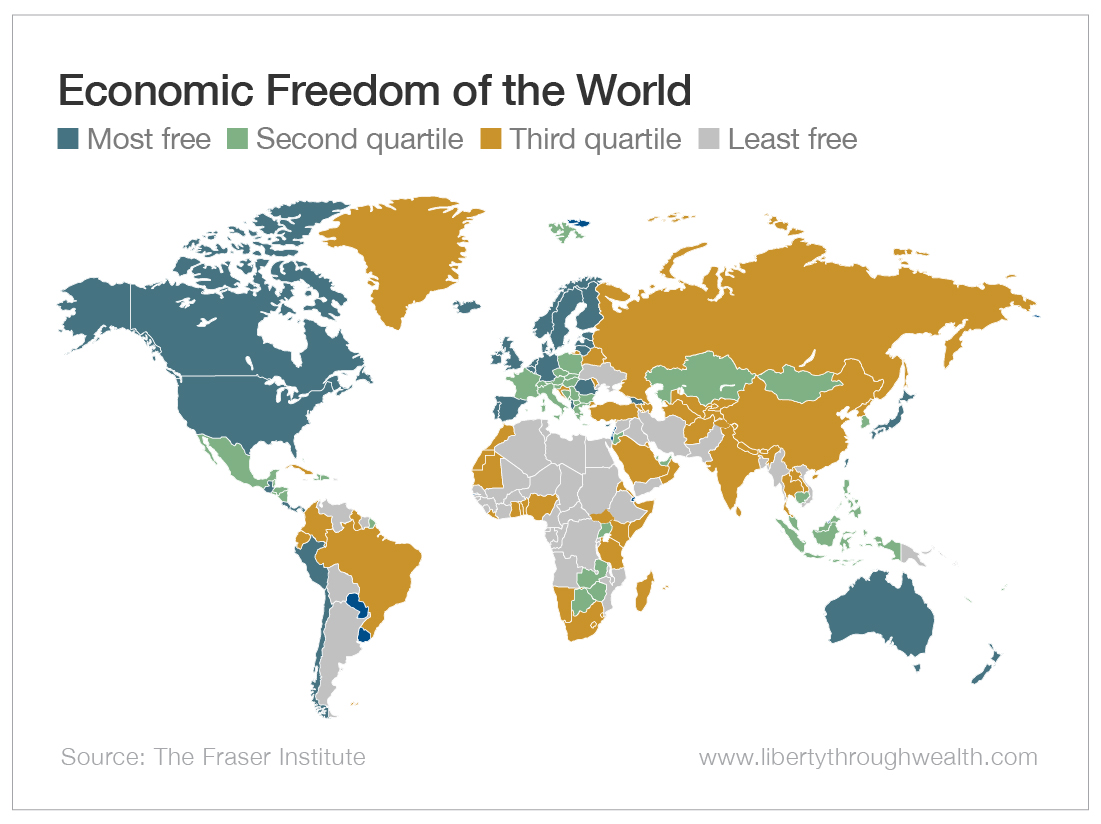 So why bring this up now?

Not so long ago, many investors concluded that economic freedom didn’t matter all that much.

“Why,” they asked, “should I avoid investing in unfree nations like China and Russia as long as the economic growth is there?”

They recently got their answer…

China was the poster child for this kind of thinking.

As the Asian giant embraced capitalism in the 1980s and 1990s, the growth was very much there.

By building a manufacturing and exporting juggernaut, China routinely posted annual GDP growth that exceeded 10%. As recently as 2007, China’s economy expanded by 14% – a rate that dwarfed those of nations like the U.S. and Japan.

And yet, contrary to expectations, the democracy and economic freedom we in the West hold dear did not follow that economic growth. The Chinese Communist Party kept a firm grip on power and retained the ability to intervene in markets arbitrarily and capriciously.

Investors keen on China’s growth story learned the hard way last year that this lack of freedom – with autocrats allowed to do whatever they want – carries enormous risks for their portfolios.

China’s government unexpectedly – and with little warning – cracked down on internet, education and video game companies in the name of “common prosperity.”

That crackdown sent Chinese technology stocks plummeting and pulled the rest of the Chinese stock market down with them.

The Chinese stock market, as measured by the iShares MSCI China ETF (Nasdaq: MCHI), has gone down by almost a third over the past year.

Or how about Russia? One of the world’s largest oil exporters, Russia’s stock market floated along quite nicely for several years until late 2021, when the winds of war began to blow.

When Russia invaded Ukraine early this year – again, a highly unexpected and seemingly irrational decision by an undemocratic government – its stock market collapsed. The iShares MSCI Russia ETF (NYSE: ERUS) is down 81% year to date.

So it seems that suppressing freedom does indeed have a cost.

Perth Tolle, a former wealth advisor at Fidelity Investments, decided to do something about it.

In 2019, she launched a fund that is free of unfree markets. That is, it doesn’t hold stocks of companies from China, Russia, Saudi Arabia, Egypt, Turkey or other nations ruled by autocrats and lacking fundamental economic freedoms.

Tolle’s Freedom 100 Emerging Markets ETF (CBOE: FRDM) uses economic freedom indexes like the one above from the Fraser Institute, along with other metrics, to create an emerging markets investing strategy that embraces personal and economic freedom.

So is it working?

The chart below shows the one-year performance of Tolle’s fund versus the broader iShares MSCI Emerging Markets ETF (NYSE: EEM), which holds stocks from both free and unfree nations. 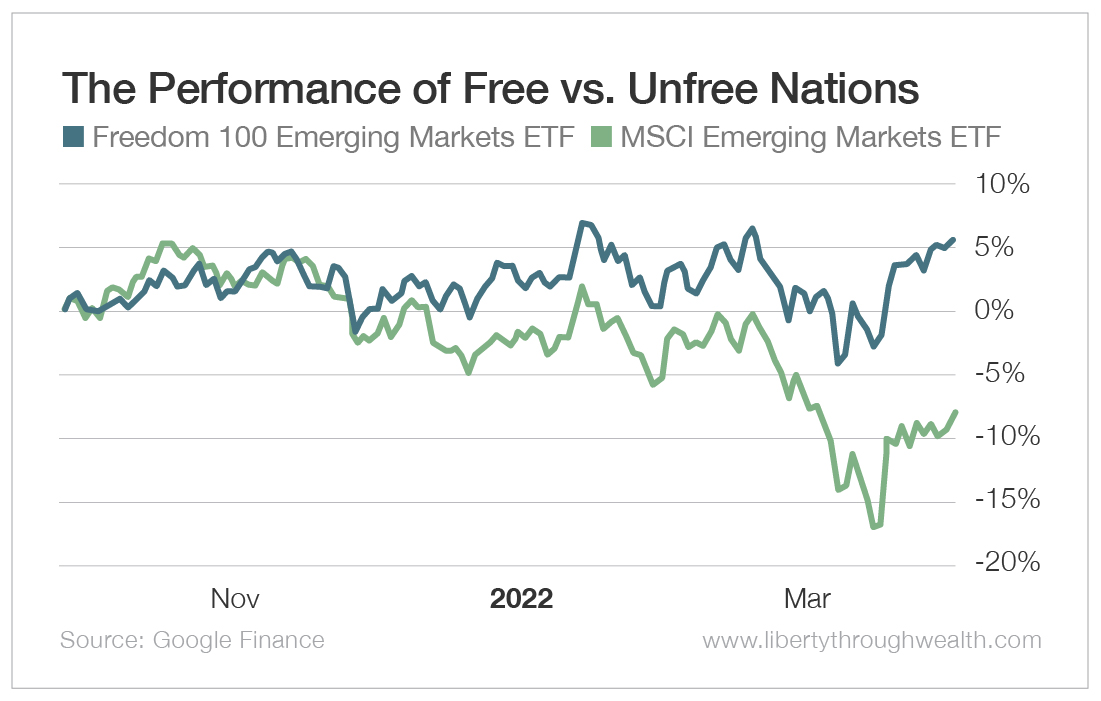 Tolle’s exchange-traded fund (ETF) is up 4.5% over the past six months, while the broader emerging markets ETF is down 8.8%, dragged down by Beijing’s market interventions and Russia’s invasion of Ukraine, among other unexpected actions by autocrats.

I recently got Tolle on the phone, and she told me that the purpose of her fund is twofold.

“Outperformance is first and foremost,” she said, as autocratic regimes are “completely capricious and unpredictable, and in the past that autocracy risk has been mispriced.”

Having seen the consequences of autocracy firsthand as a child in China and a professional in Hong Kong, Tolle also wanted to starve the autocrats. “I wanted a way to invest in emerging markets without funding autocracies with my dollars.”

It’s the definition of doing well by doing good.

Freedom, it seems, can pay.

Why You Should Ride the Coattails of These...

The Biggest Bang for Your Buck Is Overseas