We all have our biases.

Here’s one of mine: I’ve never been a big fan of investing in China.

Back in the early 2000s, the “China miracle” was all the rage among investors.

Editors of financial newsletters that focused on China attracted audiences of thousands at retail investor conferences like the MoneyShow.

Hundreds of others took cruises to China to witness Shanghai’s modern skyline in person.

Americans would make millions in China.

Even Warren Buffett entered the fray, buying $488 million worth of PetroChina (NYSE: PTR) stock in 2002. The stock went on to become the world’s first trillion-dollar company.

By the time the China mania was peaking around 2007, I knew how the movie would end.

I worked as a mutual fund manager in London in the 1990s (during the emerging market and dot-com bubbles), so I’d witnessed my share of investment manias.

Since the early 2000s, every last one of the “China miracle” newsletters has folded.

Hundreds of unsuspecting U.S. investors were ripped off by small Chinese companies that listed in the U.S., as told in the documentary The China Hustle.

It seems only the Oracle of Omaha emerged unscathed.

Buffett sold his stake in PetroChina for a $3.5 billion profit before the Chinese market’s collapse. (Today, the company is worth $124 billion – down about 87% from its peak valuation.)

Back in the News

After fading from investor consciousness for a while, China is back in the news.

The Chinese were surprised by the investor backlash.

Chinese regulators were keen to send the message that it was business as usual. Still, the meeting did little to assuage investors’ concerns about future policies.

As one attendee observed, it was clear there will be more to come.

The lesson for investors is clear as day… In this homegrown version of regulatory roulette, China can crush any public company at will.

The Myth of Chinese Capitalism

The recent actions of the Chinese government should remind investors of one crucial but overlooked fact: China is not a capitalist country.

China is governed by the Communist Party of China (CPC). And the CPC extends its tentacles into all facets of business.

Every Chinese joint venture has a CPC representative in senior management. Most Chinese CEOs are members of the CPC. Their ranks include tech icons like Alibaba (NYSE: BABA) founder Jack Ma. Every CEO of a Chinese company has a red phone on his desk, linking him directly to the CPC.

This double standard is typical of communist regimes. Meanwhile, CPC leaders are laughing all the way to the bank at the West’s collective naïveté.

The West welcomed China with open arms into the World Trade Organization in 2001.

Conventional wisdom had it that China’s entry was the first step in its transformation into a Jeffersonian democracy.

The predictable and naïvely bullish case that emerged for China has been almost tiresome.

“China is the future,” gush the bulls.

They breathlessly embrace all things Chinese. Shenzhen is the next Silicon Valley. Shanghai is the next New York. Beijing’s Tsinghua University is the next Stanford or MIT.

A typical China bull is Asoka Woehrmann, the CEO of DWS and one of Europe’s most prominent investors. He recently dismissed China’s escalating regulatory crackdown as “noise.”

He points out that the U.S. has suffered 15 depressions, two world wars and even a civil war over its short history. Despite these headwinds, the U.S. became the most powerful economy in the world.

Rogers believes that China’s going to have its difficulties. But, as he says, “I’m teaching my children Chinese. I’m not teaching them in Danish.”

I appreciate his long-term perspective, but I think Rogers has his history wrong. Countries don’t always overcome depressions and world wars. Russia, Austria-Hungary and Argentina – leading economies of their day – never did.

Here’s the reality: China has never played by the rules. Instead, it built a separate internet. Its banks are pawns of a centrally directed economy. China’s systematic rip-off of Western intellectual property is legendary.

Worst of all for investors, it’s been a lousy place to try to make money.

Have You Ever Made Money in China?

No doubt, China has minted many a millionaire over the past 10 years. But few of them are U.S. investors who bought Chinese stocks.

As an investor, you care about only one thing: Have you made money investing in Chinese stocks over the past 10 years?

Maybe you have. If so, you’re the exception.

And here’s the proof… Just compare the 10-year returns of the iShares China Large-Cap ETF (NYSE: FXI) – the largest Chinese ETF – with those of the SPDR S&P 500 ETF Trust (NYSE: SPY). 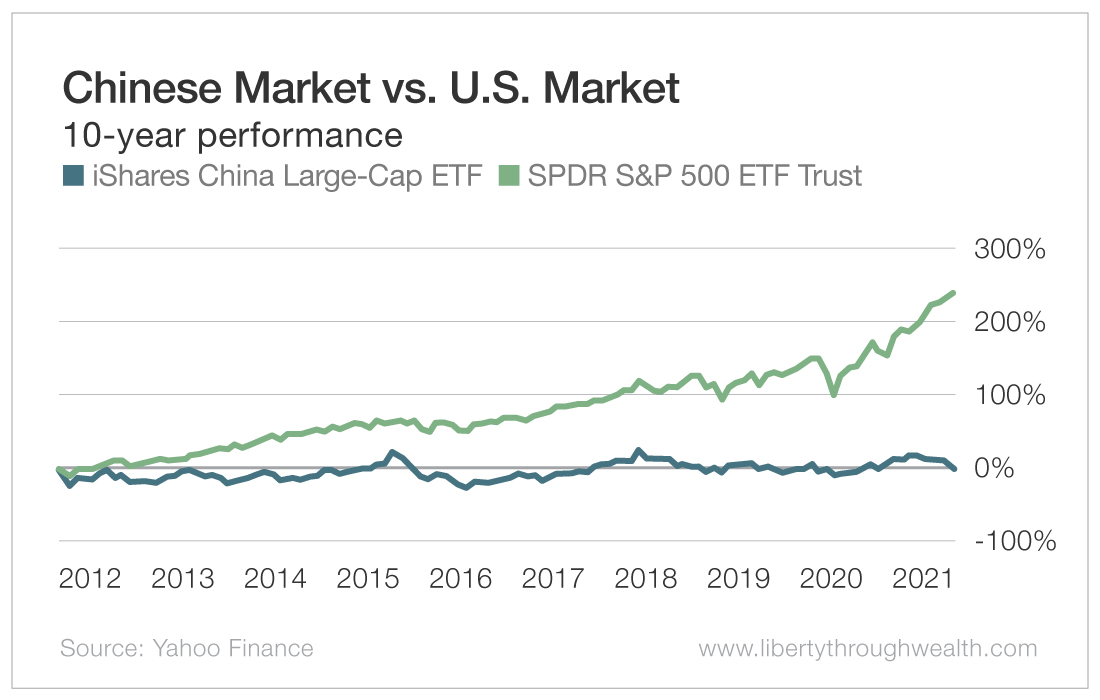 Had you invested in the China Large-Cap ETF precisely 10 years ago, you’d have lost 3% of your principal.

China’s impressive growth rate, flashy coastal cities and world-beating infrastructure should have made it the ultimate buy-and-hold investment.

Yet that was not the case.

Sure, you can make money in China with some well-timed investments. Even a long-term investor like Buffett did.

And you’ll see some short-term, China-related recommendations from The Oxford Club’s strategists in their various services.

But over the long term, there are far safer ways to make money. 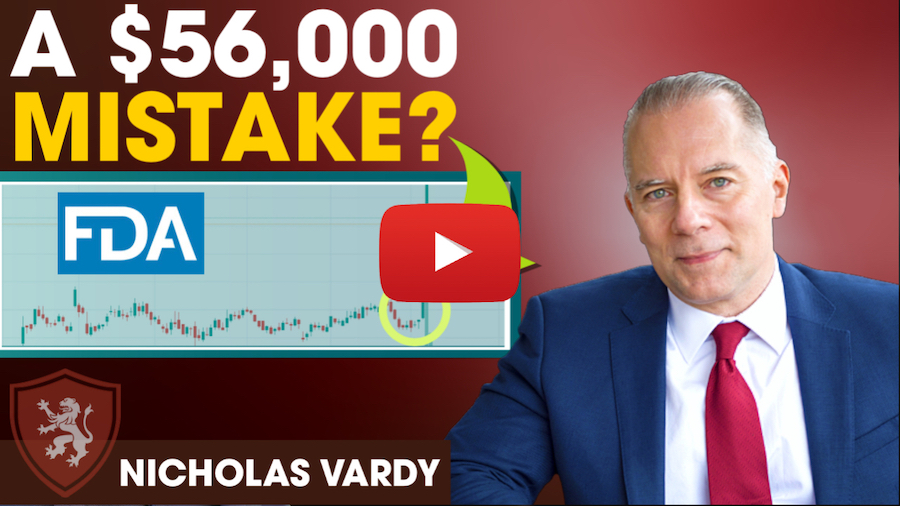 Your Chance to Invest Alongside Billionaires

The Real Threat to Cryptocurrencies