According to the 2019 Forbes ranking, the world is home to 2,153 billionaires.

But if you want to see up-to-date figures…

Look no further than the Bloomberg Billionaires Index – a daily ranking of the world’s wealthiest people. 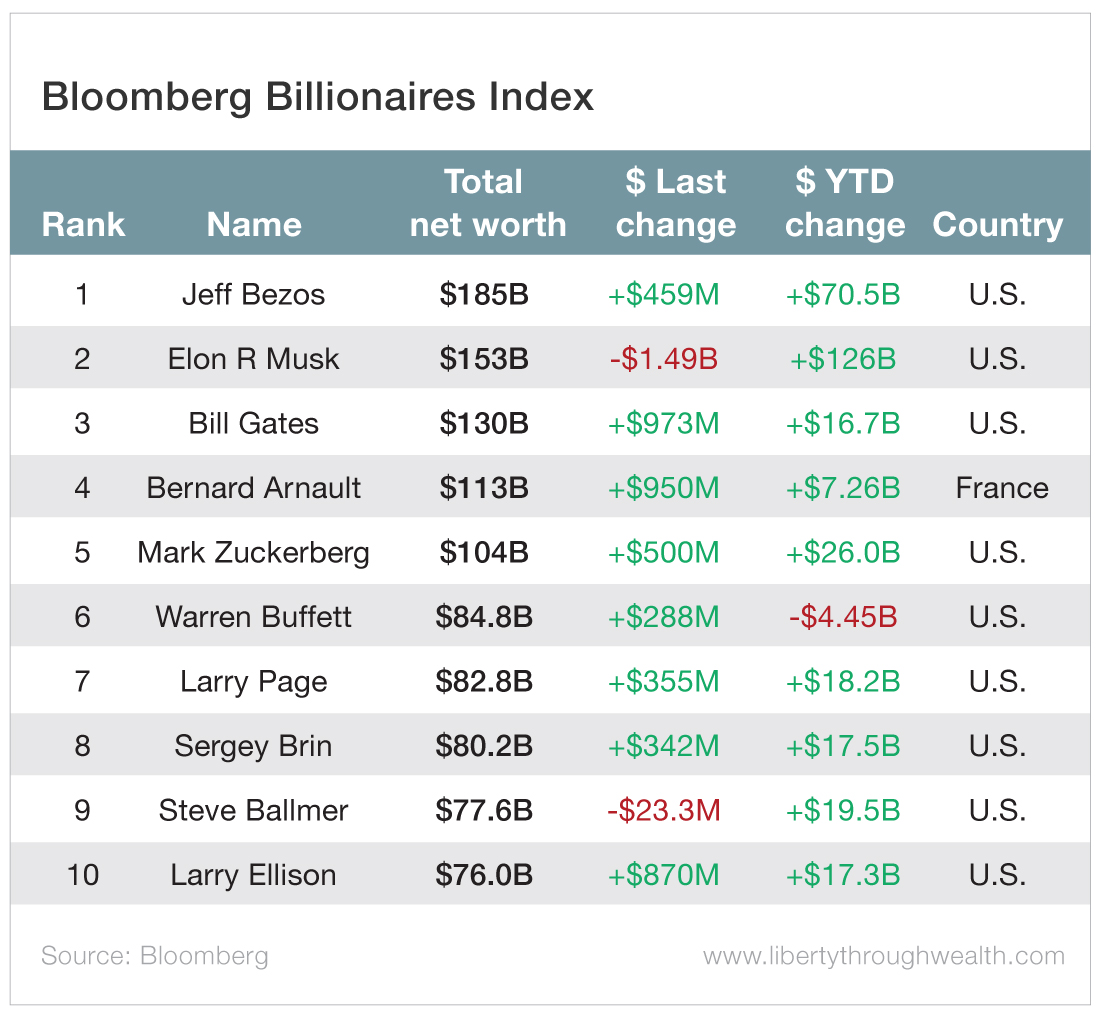 As of December 16, the world’s 10 wealthiest billionaires shared almost $1.1 trillion between them.

To put that number in perspective…

It is just about the annual GDP of Mexico – a country with a population of 126 million.

On the one hand, Americans can be proud that nine out of the world’s top 10 billionaires are from the United States.

In the game of wealth, Americans fare even better than they do in winning Nobel Prizes or Olympic medals.

On the other hand, even some Americans are starting to question whether this winner-takes-all approach to accumulating wealth is the right thing to do.

I suspect the criticism of global wealth accumulating in the hands of a few is a problem similar to what Winston Churchill said about democracy as a political system: “Democracy is the worst form of government, except for all those other forms that have been tried.”

The cure for its ills of inequality – that is, some sort of socialism or redistribution – is far worse than the disease.

Still, I recently came across some statistics about the consequences of this inequality that surprised me.

A Bird’s-Eye View of Global Wealth

That’s almost equivalent to two entire U.S. economies as measured by GDP in a single year.

Yes, COVID-19 caused widespread wealth losses during the first quarter. But these losses had reversed by June in most countries.

And today, global household wealth stands slightly above where it was at the start of 2020.

(Though it is lower than it would have been otherwise.)

The Growth in Global Wealth Inequality

Wealth inequality has been on the rise across the globe for several decades.

And these gaps have allowed the very richest to amass unprecedented levels of wealth.

Let’s look at some numbers…

According to the Credit Suisse Global Wealth Report, the world’s richest 1% – those with assets worth more than $1 million – owns 44% of the world’s wealth.

The United States dominates the global population of high net worth individuals.

More than 5.9 million individuals have at least $1 million in financial assets, as calculated in Capgemini’s World Wealth Report.

The United States is home to more than twice as many adults with at least $50 million in assets as the next five nations combined.

In terms of inequality, that means the United States is first among equals. A much greater share of national wealth and income goes to the wealthiest 1% here than in any other country. 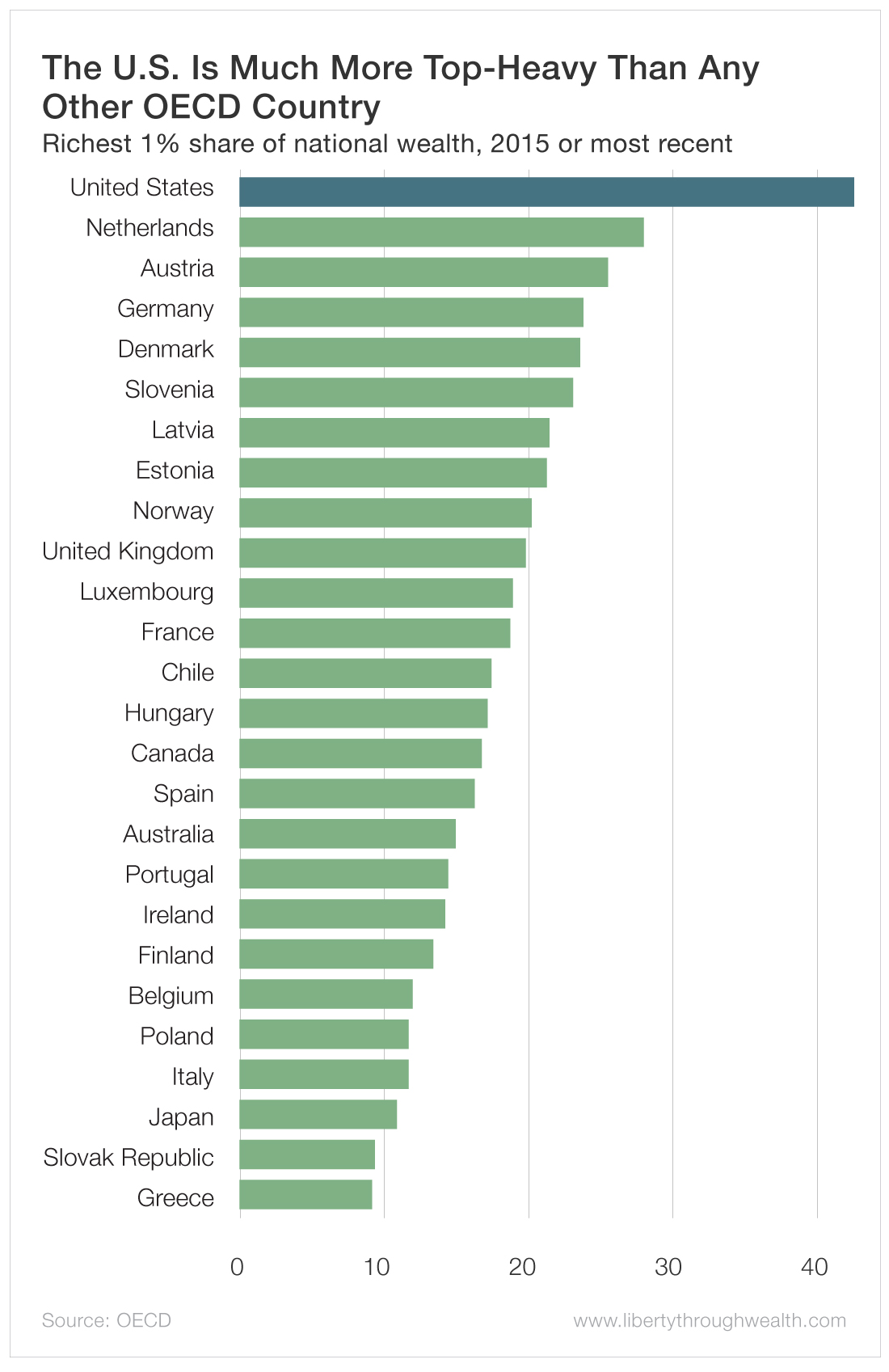 According to the Organization for Economic Cooperation and Development, the top 1% in the United States holds 42.5% of national wealth.

In the next-closest nation, the Netherlands, the wealthiest 1% owns only 28% of the country’s wealth.

On the one hand, this is the product of free market economies.

Hard work and saving pay off. And if you’re lucky, you can join the ranks of the really rich.

(As my friend Nassim Taleb observed, “Hard work will get you a professorship or a BMW. You need both work and luck for a Booker, a Nobel or a private jet.)

But here’s the statistic I found both surprising… and disturbing.

Yes, the United States is by far the world’s wealthiest nation. And it boasts the highest number of billionaires.

But the average (median) American adult has far less wealth than their counterparts in many other industrialized nations. 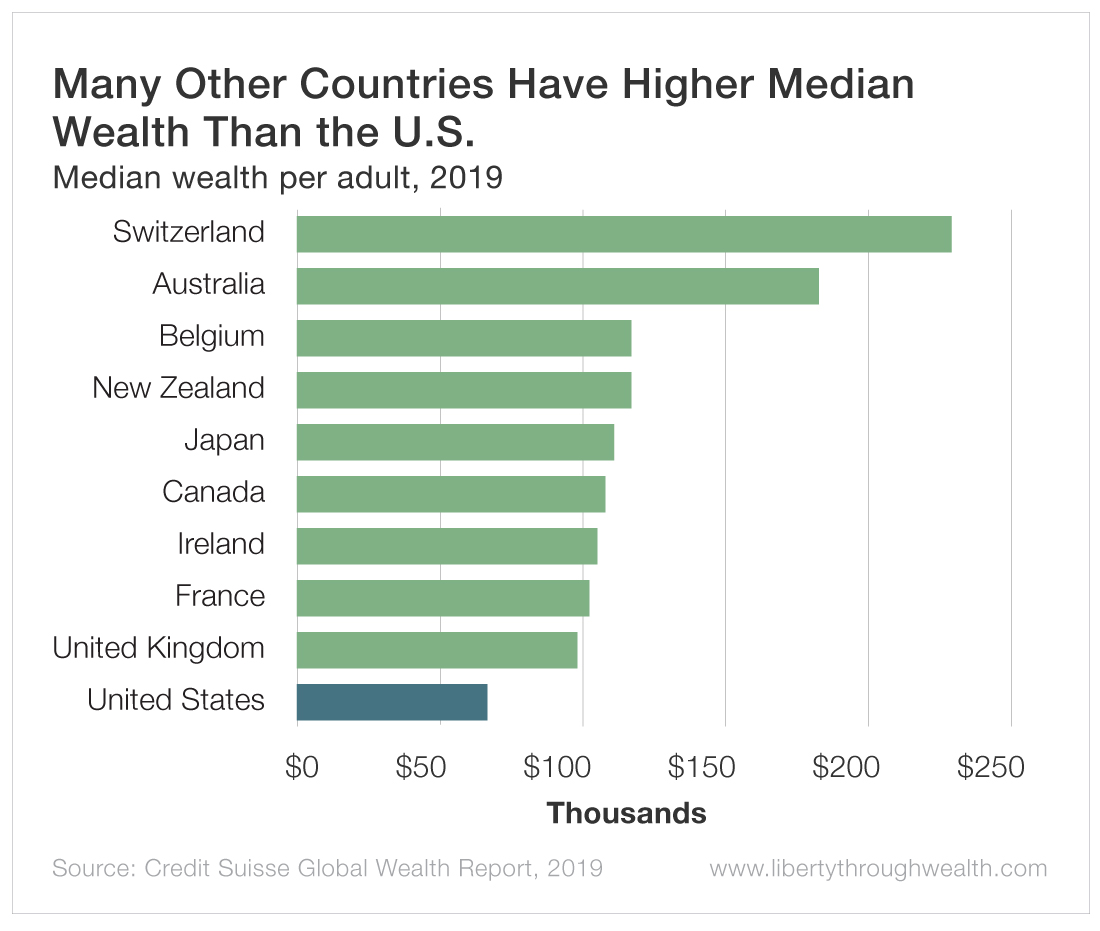 Switzerland tops the list, which does not surprise me. After all, it is a country defined by banks, gold and wealth.

But when I saw Ireland – a country that was dirt-poor as recently as the 1970s – ahead of the U.S…

And Japan, whose economy has been stagnating for the last 30 years…

And that the average Frenchman is now wealthier than his U.S. counterpart…

I admit I was shocked.

That means the average American is far less wealthy than citizens of countries that a generation ago were far poorer.

That’s not an argument for eating the rich or taxing the 1% out of existence.

Sure, the world has never been healthier, wealthier or wiser.

And if you could choose a day in history to be born, today would be it.

And yes, capitalism is the worst economic system in the world… except for all the other systems that have been tried.

Still, the trend of growing inequality across the globe is worrisome.

And history shows that this kind of inequality leads to revolutions, as it did in France in 1789 and the rest of Europe in 1848.

I’m not sure I have the answer – or even if there needs to be one.

I’d be interested to hear your thoughts in the comments section.

How You Got Richer Than the Wealthiest American Ever