Editor’s Note: As Matt Benjamin shares below, there are plenty of value opportunities for savvy investors in today’s market.

And our very own Alexander Green discovered the perfect way to play the market.

On Thursday, June 9, at 8 p.m. ET, Alex will sit down with longtime Oxford Club Member Bill O’Reilly to discuss the best investment strategy you can implement even in times of turmoil.

This simple but powerful approach to investing could deliver more money, in a shorter period of time, than virtually any other strategy.

Tune in to discover what could be the single greatest path to bigger, faster gains by reserving your FREE spot here.

The U.S. job market is absolutely fantastic at the moment.

Well, not in the hallowed halls of the Marriner S. Eccles Building in Washington, D.C., where Federal Reserve Chairman Jerome Powell and his colleagues are crying in their coffee, not popping champagne corks.

That should concern investors… though in fact there may be a major opportunity here, as I’ll discuss today…

Too Hot to Handle

But first, earlier this month Powell called the U.S. labor market “too hot” and “unsustainably hot” and said it’s the Fed’s job “to get it to a better place where supply and demand are closer together.”

Basically, he said, there are too many job openings and not enough workers to fill them.

As a result, wages are going up – since companies have to pay up to attract and retain employees.

Companies are offsetting those higher labor costs by raising their prices. In turn, workers are seeing higher prices for the things they buy, and so they’re doubling down on demands for higher wages.

It’s called the wage-price spiral, and it terrifies central bankers like Powell.

To attempt to exit this vicious cycle, the Fed is pushing both long- and short-term interest rates higher.

That will make borrowing money more expensive and suppress consumer demand, which, in turn, should force companies to lower prices to sell products.

Therefore ending the vicious cycle (if it works).

If the Fed can pull that trick off without sending the economy into recession, it will achieve the holy grail of central banking: a “soft landing” for the economy.

Unfortunately, in 12 major tightening cycles over the past six decades, it has achieved a soft landing only three times. The other nine times resulted in recessions.

You don’t have to be a bookie to know that those are not good odds.

The economy is now experiencing a white-knuckle landing. We’re far from certain that Powell & Co. can land this plane successfully – it may instead skid off the runway and into an economic contraction.

What we do know is that the Fed is committed to this course of action.

Many times in the past when the Fed was raising rates, stocks dropped dramatically and the Fed ended up chickening out, reversing course to stanch the bleeding in the stock market.

Traders called it the “Greenspan put,” after former Fed Chairman Alan Greenspan’s policy of basically setting a floor under stock prices, below which they couldn’t fall.

Yet with the S&P 500 down 17% from its January peak and the Nasdaq Composite down 30% from its November high, it’s clear that the Fed will not step in this time to rescue the markets.

And that is where the opportunity lies.

Ever since investing legend John Bogle essentially invented passive investing – basically investing in index funds, which track an entire market or sector – it’s taken off like a rocket.

In terms of equity funds, passive funds overtook actively managed funds in 2018. This was largely driven by funds that track the S&P 500, the total U.S. stock market and other broad indexes, according to Bloomberg.

You can see the growth of assets held in passive funds in the chart below. 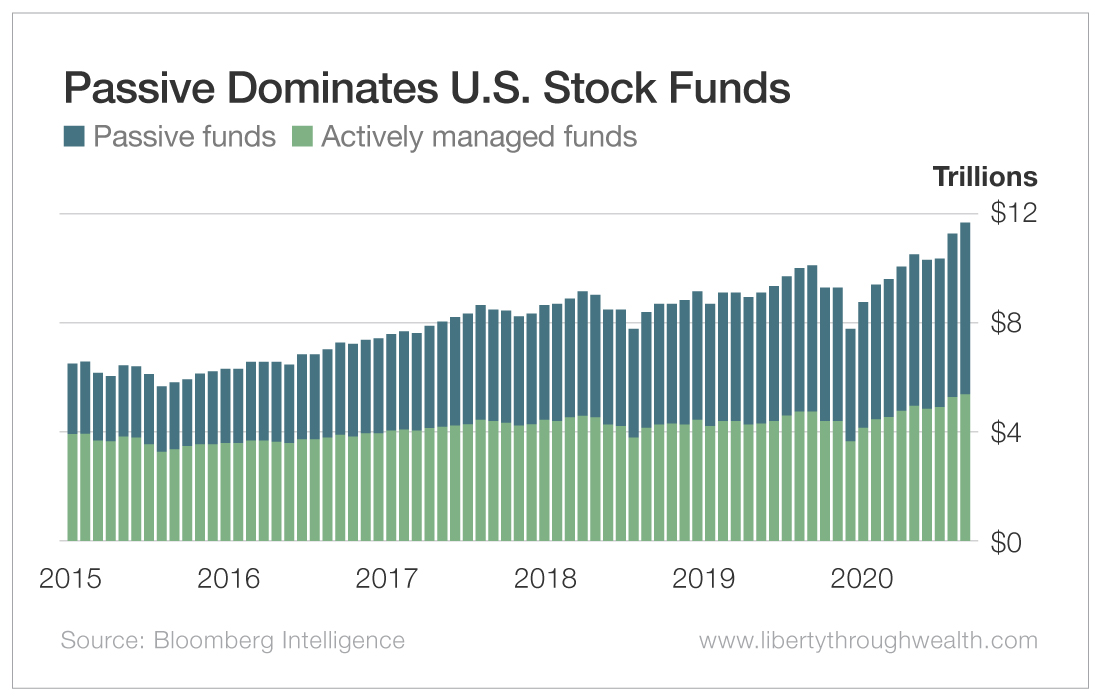 When you allocate money to a passive fund, you’re buying the entire market because you want your allocation to mirror, say, the S&P 500.

Yet when investors sell these funds in market downturns, passive fund managers sell off all the companies in the fund. They unload shares indiscriminately, paring positions in great companies along with those that are, well, less great.

And that creates value opportunities for savvy investors. Because suddenly the shares of good companies are on sale, having been dragged down by passive fund selling.

As Alexander Green recently wrote in one of his services, “In this market environment – where hair-trigger traders sell first and ask questions later – fundamentals are not always reflected in share prices. That creates opportunities.”

Opportunities to pick up great companies that are suddenly trading at lower valuations.

Everything is on sale, both good companies and less attractive ones.

Fortunately, Oxford Club strategists are all about helping you discern which are which, in order to get big discounts on great stocks.

So keep investing and invest wisely…

The Most Successful Investment in Venture Capitalist History