That’s exactly what markets are doing as I write this.

The S&P 500 was down more than 4% on Tuesday, the Dow sank 4% and the Nasdaq Composite, ever the drama queen of U.S. market indexes, dropped a whopping 5.2%.

A worse-than-expected consumer price inflation report for August came out Tuesday morning before the opening bell. Consumer prices jumped 8.3% over last August and 0.1% from the prior month. And both figures were slightly higher than forecasted.

But that’s not what the markets are reacting to.

Instead, they are reacting to how they think Jerome Powell and his colleagues at the Federal Reserve will respond to that disappointing inflation data.

Suddenly, there’s strong consensus that the Fed will hike its target interest rate 75 basis points when it meets next week (a basis point is one-hundredth of a percentage point).

The federal funds futures market now puts the chance of a 75-basis-point hike next week at 80%. That figure was 45% just a month ago.

And futures traders see a 20% chance of a full-percentage-point hike, which would be the biggest single-day hike in the history of the modern Federal Reserve.

Yet a 100-basis-point hike seems unlikely at this point, especially considering that the inflation data was only slightly higher than expected and markets seem to be overreacting.

And despite the current bout of runaway inflation, markets and consumers have maintained faith in the central bank’s ability to tame inflation. In a recent survey of consumer expectations, consumers said they expected inflation to fall below 6% by this time next year and continue to drop from there.

Those expectations, however, may stem primarily from the fact that gasoline – the price of which most Americans can cite on demand – has dropped to a national average of around $3.70 a gallon from more than $5 this summer, according to AAA. 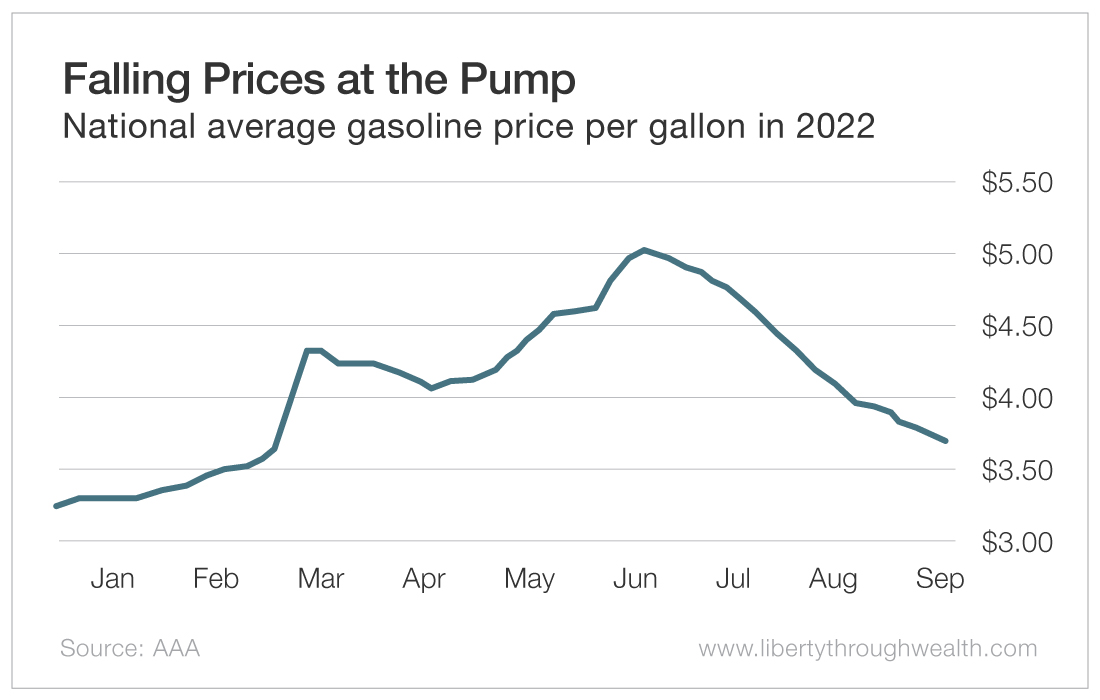 The Totality of Data

Of course, company fundamentals – revenues and earnings, strong brands, and quality management – will mean more to stock prices over the long term than macroeconomic data like consumer prices.

But at the moment, markets are terrified the Fed will raise rates so aggressively that it will cause a recession and drag all stocks – fundamentally good ones and bad ones alike – down.

And the Fed’s course of interest rate hikes is wholly dependent on the incoming data, as I described in a recent column.

That’s why Alexander Green and I warned Oxford Communiqué Pro members in our August Market Outlook Monthly that this month’s report on consumer prices “could move markets if the data comes in higher or lower than expected.”

That’s just what happened Tuesday, and in a big way.

So until the Fed gets inflation under control, you’ll want to keep an eye on the data.

But in the short term, data rules.

P.S. If you want access to Market Outlook Monthly, which Alex and I publish, check out The Oxford Communiqué Pro. Subscribers are privy to the discussion we have each month about what to watch, in addition to a State of the Markets Call Alex records monthly (the September call is released TOMORROW!) and a bonus stock recommendation in the Pro-only Profit Accelerator Portfolio. For more information, call 800.992.0205 or +1.443.353.4056 internationally.

The Time to Get In on These Markets Is Now

The Virtue of Trade and Money