How to Defend Capitalism at Cocktail Parties

I first met British economist Dr. Eamonn Butler in London a decade ago.

Recognizing him from afar, I strode across the room. I shook his hand and thanked him for his work’s positive impact on my life.

He gave me a puzzled look, so I explained…

I was in college at Stanford in the 1980s when I came across the work of Friedrich von Hayek – the Austrian free market economist.

Hayek’s ideas resonated with me deeply.

Much to the chagrin of my left-leaning professors, I wrote my master’s thesis on Hayek.

Although Hayek had won the Nobel Prize in economics in 1974, he was relatively unknown in the U.S.

Stanford’s libraries had 8 million volumes at the time.

Yet I found only a single book written on Hayek. And that book was by Eamonn Butler.

Hayek had been essentially shadow-banned by the contemporary economics profession.

Today, Butler is director of the Adam Smith Institute in London.

And he has become a great popularizer of free market ideas in the U.K. through his many books.

Butler’s latest effort is An Introduction to Capitalism. (You can download a free copy here.)

His goal with the book?

To take on the mainstream media’s knee-jerk prejudice against capitalism.

How to Argue Against Socialism

That’s because socialism has rarely been more popular among young people in the West.

A YouGov survey found that 44% of young people between the ages of 16 and 29 would prefer to live under socialism than capitalism.

And shockingly, another 7% would choose communism.

If you ever admit to being capitalist at a Manhattan cocktail party, you’ll quickly find yourself on the defensive.

And you’ll be on the defensive morally as well.

After all, in the eyes of much of America’s elite, capitalism stands for values like selfishness, greed and a lack of concern for others.

“Capitalism” conjures everything from images of dingy, polluted industrial towns of 19th-century England to the faceless power of big corporations of the 21st century.

In the eyes of the supporters of socialism, capitalism is responsible for every evil motive, action and result in economic history.

In contrast, you’ll hear that socialism’s motives are pure and noble.

After all, the values that drive socialism are altruism, cooperation and harmony.

In his book, Butler points out that the argument for socialism is based on deception.

First, it presumes that the noble intentions of socialist revolutionaries produce noble results.

Tell that to the tens of millions of victims of socialist despots like Lenin, Stalin, Mao Tse-tung, Kim Il Sung, Ho Chi Minh, Pol Pot, Castro, Mengistu, Ceausescu and Hoxha – all killed in the name of socialism during the 20th century.

Second, socialists point out that “real” socialism has never been tried in practice.

What a bunch of bunk.

Socialism has been tried many times. And each time, it has failed miserably, invariably resulting in economic poverty and political oppression.

Comparing the ideal of socialism with the reality of capitalism is a fallacy.

We can all conjure up an ideal world in our heads.

And the real-world outcomes of socialism aren’t just bad… They are horrific.

How to Argue for Capitalism

The next time you come across a self-proclaimed socialist, show them the chart below. 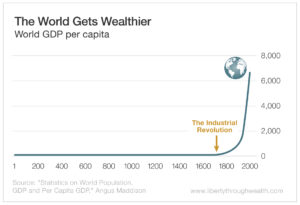 Point out that the Industrial Revolution – the result of capitalism – has generated an almost unimaginable increase in human wealth and living standards.

Until the dawn of the Industrial Revolution in England in the 1760s, human life changed little.

Most people worked on the land. Standards of living had barely budged since the days of the Egyptian pharaohs.

Things that were once luxuries – decent housing, sanitation, lighting and heating, spare clothes, travel, leisure, entertainment, and fresh meats – are now available to all.

Health, infant mortality, longevity and education have all improved markedly.

In short, capitalism made life in the bubble of that Manhattan cocktail party possible.

The contrast of outcomes between capitalism and socialism could hardly be greater.

When I studied in West Germany in the 1980s, West Germans drove luxurious Mercedes and BMWs.

When I crossed the Berlin Wall into East Berlin, I saw East Germans driving unreliable, uncomfortable and shabby Trabants.

Just contrast the literal darkness that covers North Korean nights with the light from electricity in South Korea today. 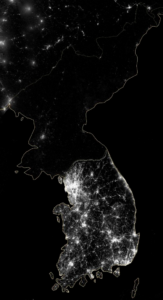 Capitalism represents light and progress. Socialism is darkness and dictatorship.

Here’s what supporters of socialism don’t get: Much of what they enjoy in life comes from capitalism and would disappear overnight under socialism.

The Utopia of Capitalism

“Real” socialism has turned the lives of hundreds of millions into a living hell.

No Floridian ever risked their life in a dinghy to escape to communist Cuba.

And no American athlete ever defected to the Eastern bloc.

The irony is that capitalism offers the greatest chance of a genuine utopia.

That’s because capitalism offers you the freedom to live your life as you see best.

Your fate is not in the hands of a government bureaucrat, who can do what he wants, when he wants, all in the name of the “collective good.”

Socialism may promise a utopia… But it takes capitalism to deliver it.

Does the Federal Reserve Have the Time, Luck and Skill to Pull This Off?