The U.S. trade war with China has pushed Asia’s economic giant back into the headlines.

American companies clamored to enter the Chinese market, lured by the promise of 1.3 billion new consumers and an ever-growing middle class.

That all changed almost overnight with President Trump’s imposition of tariffs on Chinese exports. It also signaled the welcome end to an era of American naïveté about China.

I have always been skeptical that foreign investors could make a fortune investing in China. Although there are fewer China stock market bulls than there were a decade ago, they are still around.

Sure, you can make money in China with some well-timed investments. (For example, I expect the Chinese stock market to rally sharply upon the conclusion of a trade deal with the U.S.)

But don’t buy into the naïve myths that perennial China stock market bulls are peddling.

Myth No. 1: China Is More Capitalist Than the U.S.

I’ve lived in countries governed by deeply corrupt communist parties, so this talk really gets under my skin.

China bulls believed that once China entered the WTO in 2000, this would accelerate the country’s transformation into a Western-style Jeffersonian democracy.

What a bunch of bunk.

Make no mistake about it… China is governed by the Communist Party of China (CPC). And the CPC extends its influence into all facets of business life.

Every Chinese joint venture has a Chinese representative in its senior management.

Many Chinese CEOs are members of the CPC. Their ranks include high-tech icons like Alibaba‘s (NYSE: BABA) Jack Ma.

Every CEO of a Chinese company has a red phone on his desk, linking him directly to the CPC.

The CPC also plays by a different set of rules than the rest of the world.

That kind of double standard is typical of communist regimes. Rest assured, CPC leaders are laughing all the way to the bank at the West’s collective naïveté.

Myth No. 2: The U.S. Is a Hostage to the Chinese Economy

Conventional wisdom tells us that China has become irreplaceable to the U.S. economy… It seems that everything you buy in Walmart (NYSE: WMT) and Costco (Nasdaq: COST) is made in China. And whatever little there is left on the shelves after China turns off its export spigot will be far more expensive.

The reality is more complicated – and already changing.

In the 1970s, everything was made in Japan. Over the last 20 years, it’s been made in China. But like Japan, China is slowly being shunted.

Cisco (Nasdaq: CSCO) has already greatly reduced its manufacturing in China. Other U.S. companies are looking to shift production to Japan, South Korea and Taiwan.

This shift away from China is happening faster than you think.

Imports to the U.S. of Chinese goods covered by tariffs fell by 27.6% in the first three months of this year. But what is China’s loss is the rest of Asia’s gain.

U.S. imports of Vietnamese products in categories subject to tariffs rose by 35% over the same period.

Expect to see “Made in China” a lot less in the coming years.

Myth No. 3: You’ll Make a Fortune Investing in China

The bull case for investing in China is almost tiresome and predictable. “China is the future,” gush the bulls.

Just look at the skyscrapers in Shanghai, the bullet trains in Beijing, the futuristic factories in Shenzhen. You can smell the money in the air.

Yes, China has minted many a millionaire over the past 15 years. Too bad next to none of them are U.S. investors who bought Chinese stocks.

U.S.-based buy-and-hold investors betting on the rising tide of Chinese growth have made next to no money in China over the past 10 years. 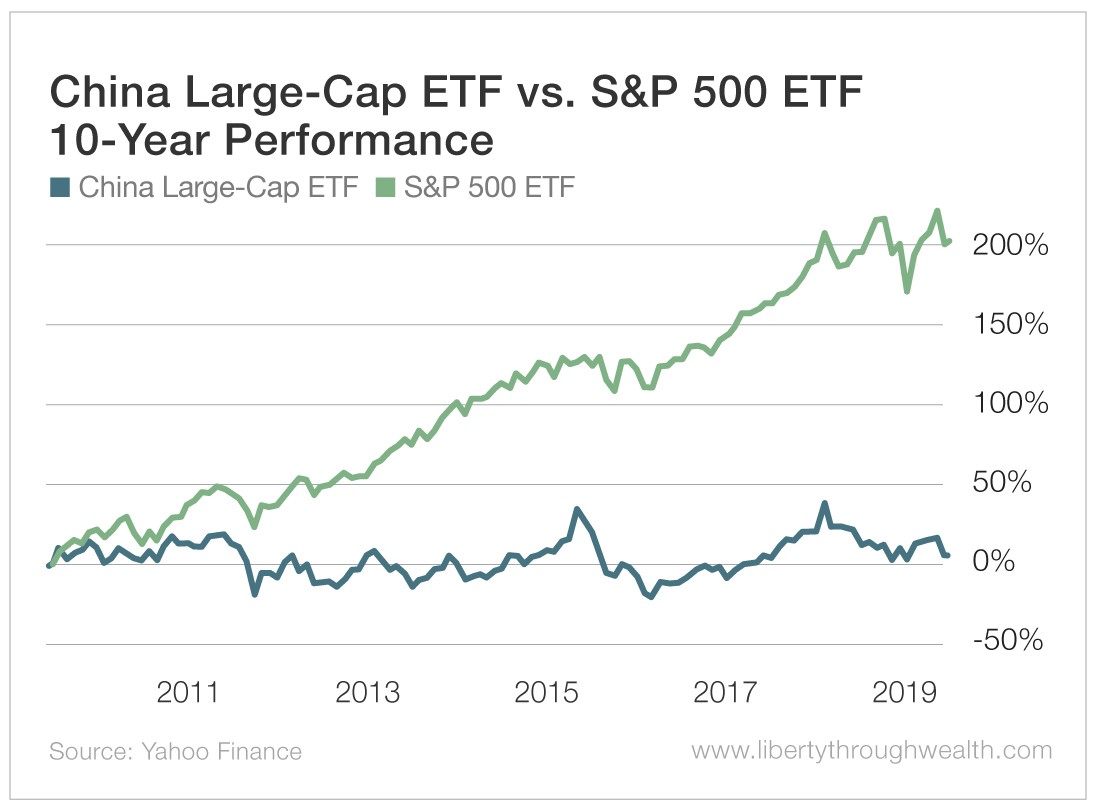 So don’t bet on the China miracle to make you rich. Don’t fall for the China hustle.

P.S. The documentary The China Hustle details how small, nondescript and fraudulent Chinese companies are hyped up and sold by American investment banks to U.S.-based investors.

Becoming Rich as Fast as You Can, Part 1

Why Crypto Is the New Tulip Bulb Mania