Should You Invest in the Country of the Future?

“Wow! Brazil is big!” exclaimed George W. Bush after President Luiz Inácio Lula da Silva showed the then-U.S. president a map of Brazil during a visit to the White House in 2005.

Put another way, Brazil is about 90% of the U.S. in terms of size. And Brazil’s population of 211 million is equal to the populations of the United Kingdom, Germany and France combined.

But it was never Brazil’s size that was in question. It’s just that Brazil has always been long on potential… but short on results.

But as a wry Charles de Gaulle observed, “Brazil is the country of the future… and always will be.”

It’s a sentiment with which I heartily agree. Brazil has epitomized the roller coaster of Latin American economies for generations.

Fifty years ago, Brazil was one of the most rapidly growing economies in the world. Its economy grew at a China-like 11% a year on average between 1970 and 1974.

Alas, this period of rapid expansion was followed by a sharp economic slowdown. For much of the 1980s, Brazil’s economy grew by less than 1% a year. And the country became the poster child for the Latin American debt crisis.

Brazil’s economic fortunes seemed to change overnight after the turn of the millennium. With the election of left-leaning President da Silva in 2002, Brazil suddenly found itself on a roll.

During da Silva’s early tenure, Brazil ran both a fiscal and trade surplus. It paid off foreign creditors early and became a net creditor. Da Silva attributed his country’s turnaround to a “higher power.”

The old Wall Street maxim says “Never confuse brains with a bull market.” As it turns out, Brazil’s economic fortunes between 2002 and 2008 were closely linked to the bull market in commodities.

And once the commodities market crashed, so did Brazil’s economy. Brazil quickly reverted to its status as an economic laggard.

It’s not surprising then that Brazil’s stock market – the Bovespa – did nothing in the 10 years leading up to 2018.

But halfway through last year, that all changed.

Over the past 12 months, the Bovespa has climbed more than 35%, trouncing the returns on the S&P 500. 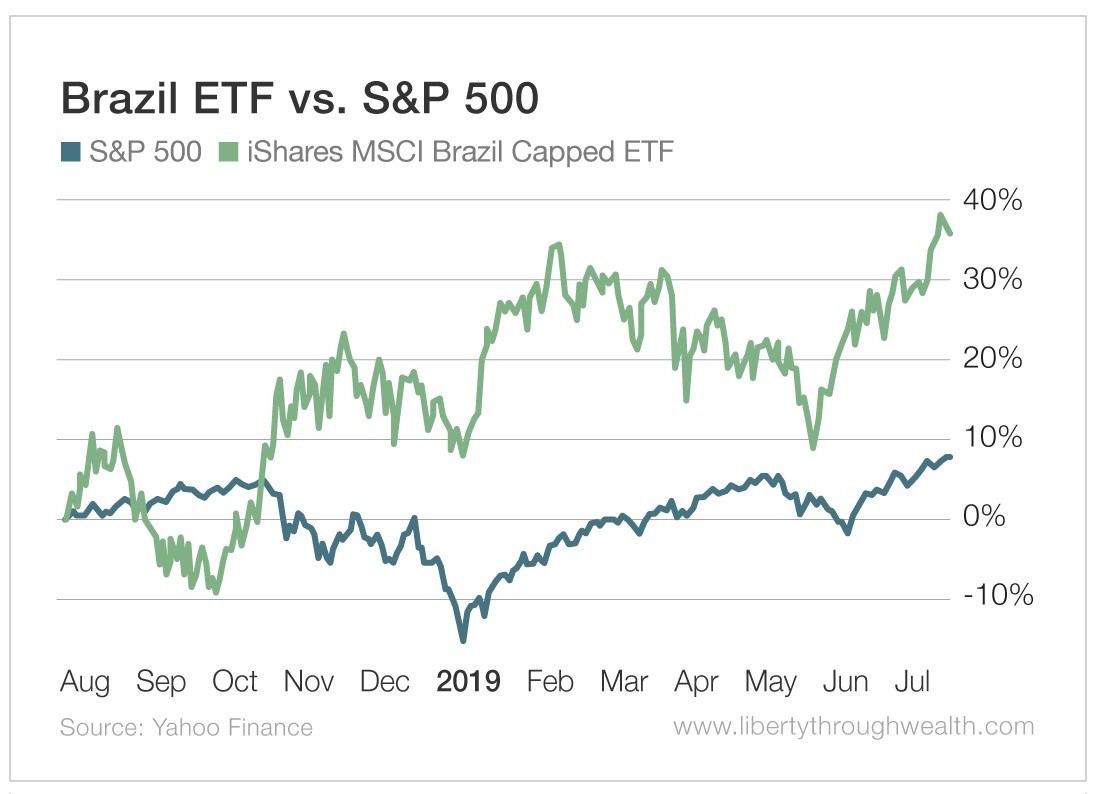 What’s behind the recent rally in Brazilian stocks?

Chalk it all up to last October’s election of right-wing politician Jair Bolsonaro as Brazil’s president.

The election of the “Trump of the Tropics” followed years of political corruption during the reigns of former leftist presidents da Silva and Dilma Rousseff.

Bolsanaro’s government also announced plans to privatize or liquidate some 100 state-run companies and to attract private investment in the country’s backward road and rail networks.

And just this week, the lower house of Brazil’s Congress approved an overhaul of the country’s overburdened pension system.

Reforms like these are music to emerging market investors’ ears.

No wonder Bolsonaro’s reforms have unleashed one of the periodic rallies in the Brazilian stock market. The real question is whether Bolsanaro will succeed over the long term.

Frankly, I wouldn’t bet on it. Indications tell me that Brazilian politics are as chaotic and dysfunctional as they’ve always been.

The upper house of the Brazilian Congress has already delayed a vote on finalizing the recent pension system reform.

Now, this doesn’t mean that you can’t make money from the current rally in Brazilian stocks. It’s just that you have to put it into proper historical context.

I’ve seen this story play out too many times to count.

A right-wing, pro-market government is elected in an emerging market. The stock market rallies in the hope that “this time is different.” (Reality check: It rarely is.) The market gets overexuberant as foreign investors pile in.

Investors who know ahead of time how this drama plays out can make a lot of money on the way up… and perhaps even on the way down. So keep your eye on the Brazilian stock market in the months to come.