Is It Time to Bet Big on Warren Buffett?

And that marked Buffett’s worst performance relative to the S&P 500 in a decade.

I’ve written before that Buffett has underperformed the S&P 500 for 15 years straight.

It seems that the combination of Berkshire’s size and Buffett’s infamous aversion to technology stocks – except for Apple (Nasdaq: AAPL) – has caught up with him.

Yet, as a contrarian at heart, I want to play devil’s advocate today with my own views.

What if I’ve been wrong about Buffett?

Could it be that after this decade and a half of trailing the market, now is precisely the time to be bullish on Berkshire Hathaway (NYSE: BRK-A)?

The Market’s Current State of Play

Every few decades or so, financial markets go crazy.

You saw this with the Nifty Fifty technology stocks of the 1960s.

As I write this, the CNN Fear & Greed Index – my favorite measure of market sentiment – stands at a whopping 97 out of 100.

Although I would not classify today’s market as a mania that rivals the dot-com bubble of 1999… I do see some compelling parallels.

First, the top technology companies now account for as much of the S&P 500 as they did at the height of the dot-com boom in 1999.

Twenty years ago, it was the “four horsemen” of technology – Intel (Nasdaq: INTC), Cisco (Nasdaq: CSCO), Microsoft (Nasdaq: MSFT) and Dell (NYSE: DELL). These were joined by the “new horsemen” of the internet, Oracle (NYSE: ORCL), Sun Microsystems, EMC and JDS Uniphase.

In 2020, just five of these technology companies – Intel, Cisco, Microsoft, Dell and Oracle – still trade on public markets. Other high-profile names like CMGI and WorldCom are also long dead and gone.

As Mark Twain is often reputed to have said, “History doesn’t repeat itself, but it rhymes.”

A Bullish Case for Berkshire

No. 1: Negative Sentiment Toward Berkshire

Regular readers know that I am a big fan of market sentiment.

And with Berkshire lagging the market for the past decade and a half, the sentiment toward it is as negative as it’s been in recent memory.

This negativity is nothing new.

During the dot-com boom, tech bulls dismissed Buffett as out of touch with the markets. Buffett was unable to grasp how technology stocks meant that “this time it’s different.”

On December 27, 1999, Barron’s published a piece titled “What’s Wrong, Warren?” which suggested “Warren Buffett may be losing his magic touch.”

And Berkshire’s performance came roaring back.

No. 2: Strategies Revert to the Mean

Buffett’s investment partner Charlie Munger has spoken a lot about the importance of mental models. I have written about some of these mental models as well.

According to Munger, one of the most important mental models for financial markets is “reversion to the mean.”

You saw this in the valuation of the Japanese stock market in the 1980s.

You saw this with Chinese stocks in 2007 when PetroChina became the world’s first trillion-dollar company before plummeting 75%.

History teaches us that out-of-favor investment strategies come back with a vengeance.

The same applied to Berkshire. 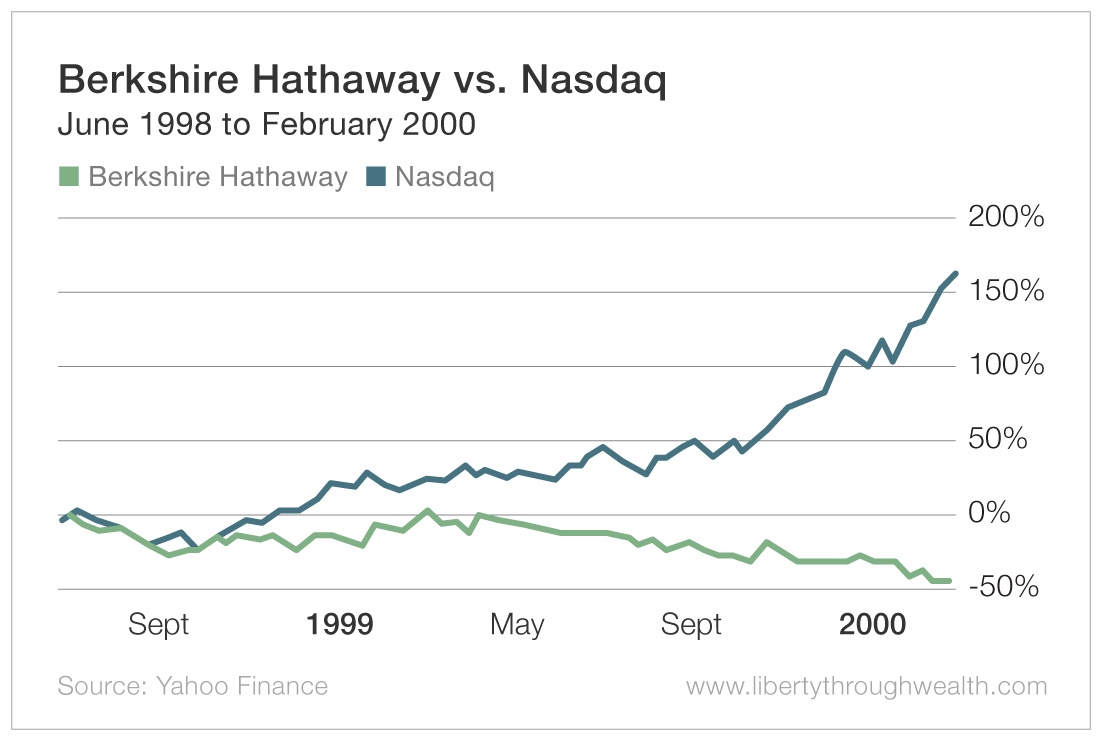 But in the two years after the bubble burst, Berkshire soared 77%, while the Nasdaq tumbled 62%.

No. 3: Berkshire’s Cash Pile as a Free Option

Berkshire has a lot of cash… $128 billion to be exact.

Berkshire has not made what Buffett calls an “elephant-sized acquisition” for four years.

And it’s clear that Buffett is waiting for the opportunity to put that cash to work.

A big cash pile allowed Berkshire to cut sweetheart deals with the likes of Goldman Sachs (NYSE: GS) and Bank of America (NYSE: BAC) after the global financial crisis of 2008. I’ve come to view Berkshire’s cash pile this way.

Yes, Berkshire may underperform the S&P 500 by a small amount.

But its $128 billion is like a free option to purchase cheap assets following an inevitable crash.

Will the Berkshire Tortoise Beat the Market Hare?

Berkshire has trailed the market over the past 15 years. And who knows how long Buffett will remain at the reins.

If you fear a market crash, Berkshire is the place to be.

And a crash is not a question of if, but when.