Whether it’s the top 10 in college football… the annual rankings of U.S. colleges… or the medal count in the Olympics… Americans always want to know who is on top.

And there is one arena where Americans have rarely questioned their dominance: the global economy.

Yes, the U.S. is home to only about 4% of the world’s population. But it has accounted for roughly 25% of global GDP for many decades. Moreover, its companies are among the biggest and most innovative on the planet.

Yet this perceived dominance may be changing.

Since 1989, Switzerland’s IMD business school has published the World Competitiveness Yearbook, which ranks the world’s leading 64 economies based on more than 330 criteria that measure different facets of competitiveness.

For the second year in a row, the United States’ rank stands at No. 10.

Let’s take a look at the World Competitiveness Yearbook top 10 rankings for 2021. 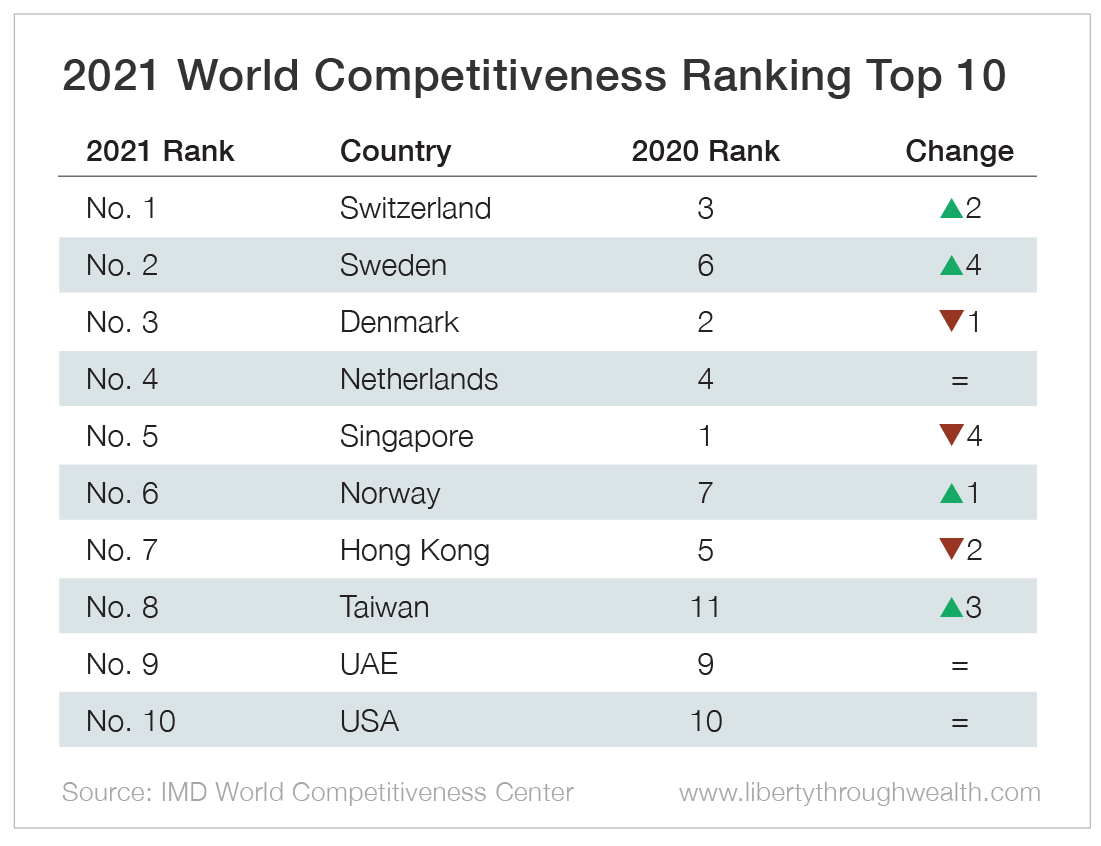 Switzerland has come out on top for the first time in the survey’s 33-year history.

Sweden came second (up from sixth last year), with Denmark in the third spot (second in 2020).

Completing the top five were the Netherlands (also fourth last year) and Singapore, which tumbled from the No. 1 spot it held the previous two years.

Overall, the report concluded that Europe’s economies weathered the pandemic better than most other regions.

That said, much like the annual U.S. college rankings, the top 10 stays mostly the same year after year.

I compared the World Competitiveness Yearbook’s 2021 rankings with the rankings from 2007. Seven of the top 10 most competitive economies in 2007 remained in the top 10. 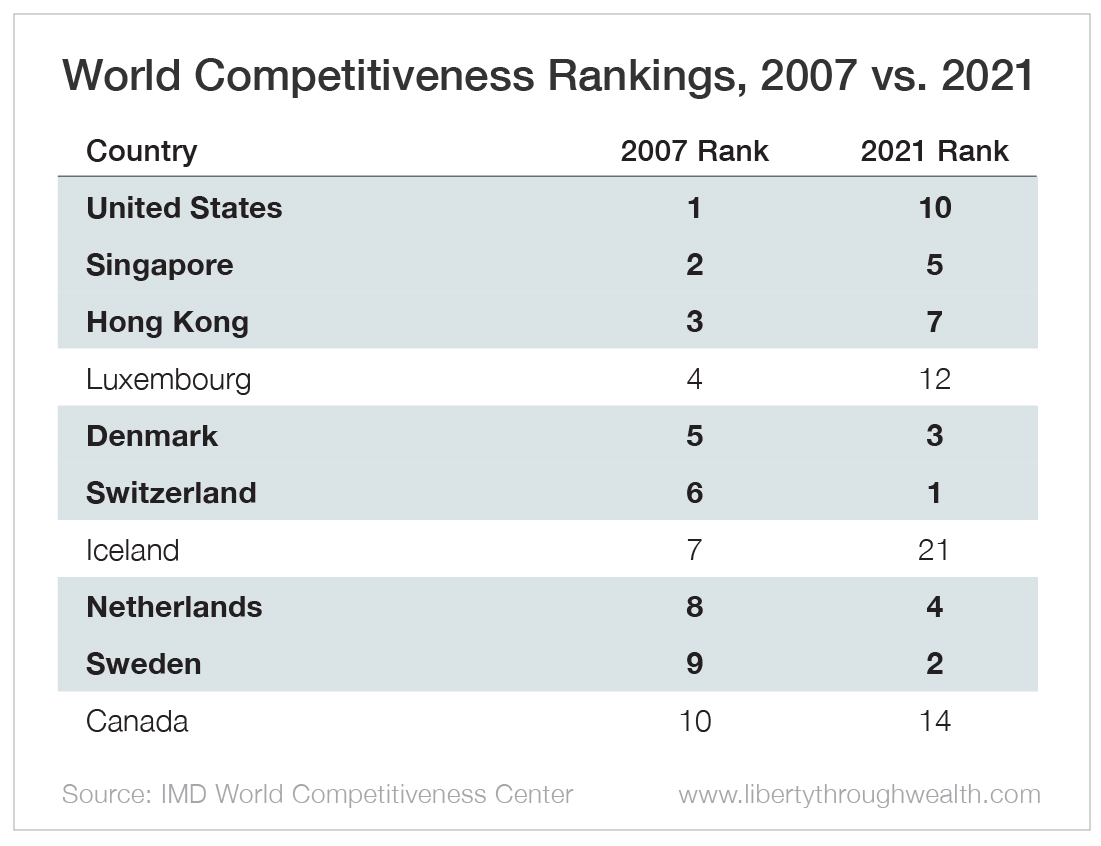 Tiny Luxembourg and Iceland have dropped out of the top 10.

The top economies have remained remarkably similar over the years.

And sadly, the biggest change today is the precipitous fall of the United States’ standings.

Trends of the Past Years

As I examine the rankings, I see a few notable trends.

In 2019, the trade war between China and the U.S. damaged global perceptions of both economies.

Overall, global comparisons between the U.S. and the rest of the world in education, healthcare, economic opportunity and even political stability have become increasingly unflattering.

Few economies have been more hyped than those of the BRIC countries – Brazil, Russia, India and China.

In 2001, Goldman Sachs’ Jim O’Neill famously argued that these future economic powerhouses would dominate the global economy by 2050.

Alas, the global competitiveness rankings suggest that the BRIC have a long way to go.

From a standing start 50 years ago, a handful of Asian countries have become the most competitive economies on the planet. Consider the remarkable success of the Asian Tigers: Hong Kong, Singapore, South Korea and Taiwan.

The Asian Tigers may soon rival the Scandinavian countries as the most competitive group of small countries in the world.

The downward trend in U.S. competitive rankings is the most worrisome trend I have seen.

Of course, this is not the first time that global perceptions of the U.S. have turned sharply negative. The period from the late 1960s and early 1970s was similar.

I hope that the U.S. economy’s dynamism will help it rebound as it always has.

As Winston Churchill observed, “You can always count on Americans to do the right thing – after they’ve tried everything else.” 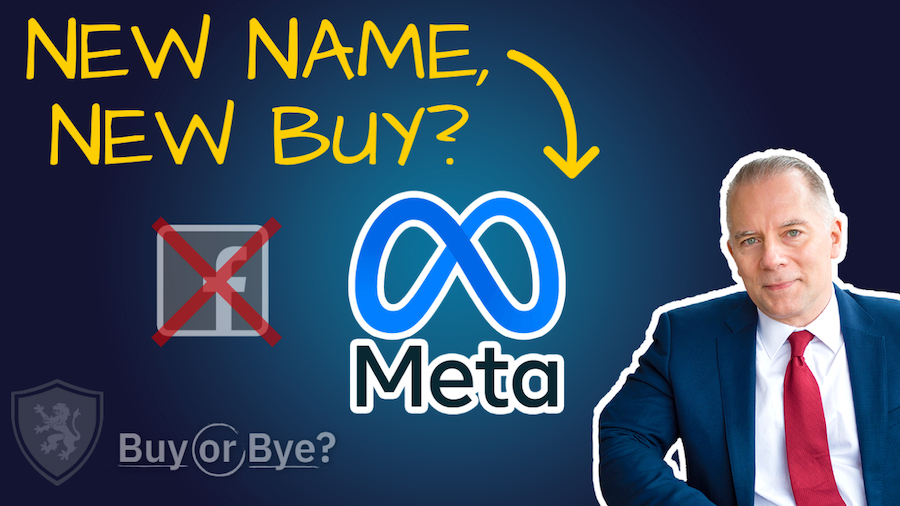 How to Profit From the Golden Age of...