Whether it’s the top 10 in college football… the annual rankings of U.S. colleges… or the medal count in the Olympics… Americans always want to know who is on top.

The World Economic Forum – which runs the annual conference of the global elite at Davos each year – recently issued a 666-page report ranking 141 countries.

Its criteria included macroeconomic policies; the strength of public and private institutions; the quality of education and infrastructure; and the efficiency of markets for goods, labor, and capital.

In 2019, the United States’ rank on the Global Competitiveness Index fell from No. 1 to No. 2.

(The U.S. also fell from No. 1 to No. 3 on Switzerland’s IMD business school’s rival ranking, the World Competitiveness Yearbook.)

Is this the start of a new trend? And should America be worried?

Here’s why my answer is an emphatic “no.” 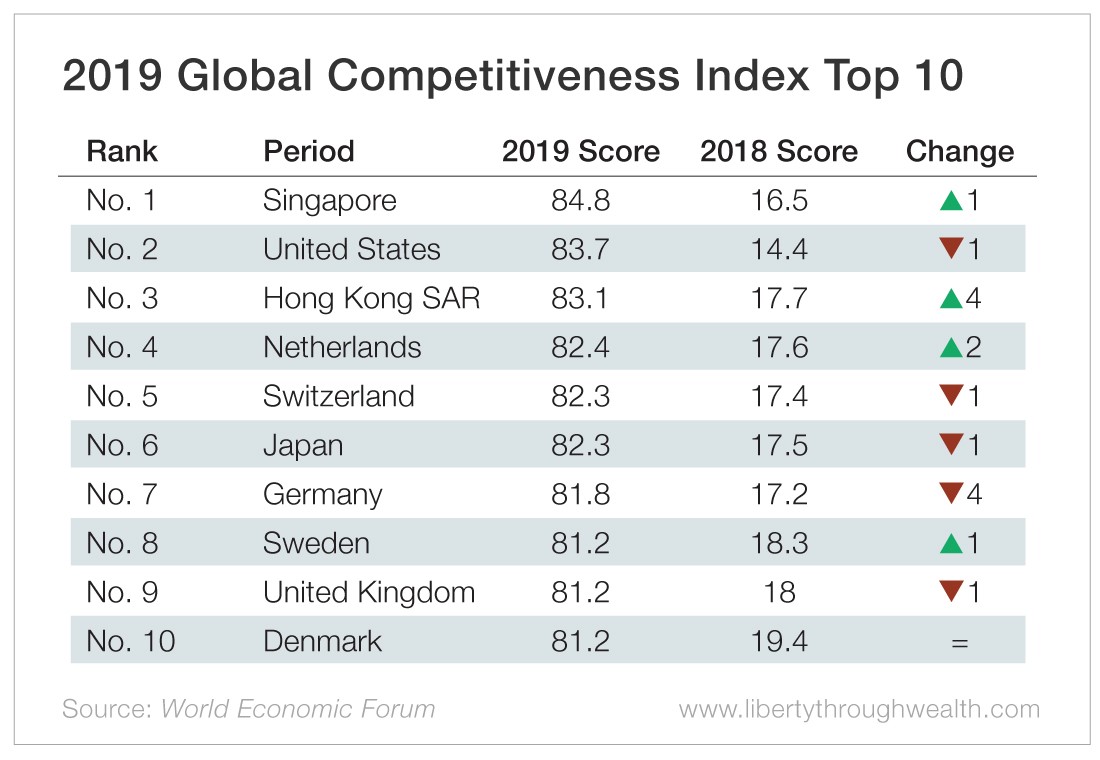 Here’s what I see when I look at this list.

First, much like the annual U.S. college rankings, the list of the top 10 most competitive economies stays mostly the same year after year.

I compared the World Economic Forum’s 2019 rankings with the rankings from 2009. Eight of the top 10 most competitive economies in 2019 were in the top 10 a decade earlier.

Overall, the top 15 economies in 2019 are almost identical to those a decade ago.

Second, Singapore’s No. 1 ranking is hardly a sign of U.S. failure.

No one who has been to Singapore can be surprised by its top ranking. It is one of the most remarkable places I have ever visited.

Still, to compare the economy of a city-state of 5.6 million (equal to the population of metropolitan Atlanta) to a diverse, sprawling country of 327 million is comparing apples to oranges.

Third, the U.S. was weighed down by negative factors like market concentration, the U.S.-China trade war and a drop in U.S. life expectancy.

But the U.S. continued to rank first on business dynamism and second in its capacity for innovation. These two factors have always been key to the success of the U.S. economy.

Trends of the Past 10 Years

As I look further down the rankings, I see a few notable trends.

Few economies have been hyped more than those of the BRIC countries – Brazil, Russia, India and China. Goldman Sachs has argued that these future economic powerhouses will dominate the global economy by 2050.

Alas, the BRIC competitiveness ranking suggests these have a way to go.

From a standing start 50 years ago, a handful of Asian countries have become the most competitive economies on the planet. Consider the remarkable success of the Asian Tigers.

The Asian Tigers now rival – and may have surpassed – the Scandinavian countries as the most competitive group of small countries in the world.

No region has disappointed more than Latin America.

BRIC member Brazil was Latin America’s great hope. But its competitiveness ranking dropped from No. 64 to No. 71.

Brazil was beaten out by Latin America’s second-largest economy, Mexico, which rose from No. 60 to No. 48. Free market maven Chile is the only Latin American economy that was able to maintain a respectable ranking of around No. 30.

Notwithstanding the hype about emerging opportunities in India, Brazil, Africa and elsewhere… America’s, Northern Europe’s and Asia’s places at the top of the global competitive rankings will remain secure for decades to come.

Don’t bet against them.

The Cautionary Tale of Argentina