And yet… investors aren’t happy.

The most recent weekly survey by the American Association of Individual Investors (AAII) – the granddaddy of all investment sentiment indicators – confirmed this last week.

According to the results, the percentage of investors who think stocks will rise over the next six months plunged to its lowest level in more than a year.

Meanwhile, bearish sentiment rose 12.1 points to 39.3%. That marks the seventh week of the last nine that pessimism has exceeded the historical average of 30.5%.

My favorite indicator – the CNN Fear & Greed Index – agrees with the AAII results.

Closing at 21 yesterday, it has languished between “fear” and “extreme fear” since the dog days of summer.

What is the source of all this pessimism?

Not a substantial market correction or crash. It’s a mere 3.9% pullback in the S&P 500 from its recent highs.

But investors who know market history understand that the pullback spells opportunity to get in before the market’s strongest season.

So far, September has been a difficult month for the U.S. market. The S&P 500 has been up just four out of this month’s 13 trading days.

That puts the index on track for its first down month this year.

Investors are spooked. But to market historians, this is no surprise.

The Stock Trader’s Almanac reports that, on average, September is the U.S. stock market’s worst-performing month. It dubs the annual drop-off the “September effect.”

This anomaly has puzzled market analysts.

The September effect seems unrelated to any particular market event or news. Nor is it restricted to U.S. markets – it’s a worldwide phenomenon.

Whatever the reason, it is remarkably consistent.

A Solid Fourth Quarter Ahead?

The bearish September effect has a more notable – and bullish – counterpart.

“Sell in May and go away” is one of Wall Street’s most famous adages. And like the September effect, it has stood the test of time.

A “Sell in May” strategy focuses on the period between October and April – typically the strongest months for the stock market.

A seminal paper by Sven Bouman and Ben Jacobsen published in the American Economic Review examined data from January 1970 to August 1998 and confirmed that U.S. stocks outperformed between November and April.

It also revealed that the “sell in May” effect was even stronger in other countries. Bouman and Jacobsen wrote…

Surprisingly, we find this inherited wisdom to be true in 36 of the 37 developed and emerging markets studied in our sample. The “Sell in May” effect tends to be particularly strong in European countries and is robust over time. Sample evidence, for instance, shows that in the UK the effect has been noticeable since 1694.

Later research by Sandro Andrade, Vidhi Chhaochharia and Michael Fuerst examined the returns of the same 37 markets from 1998 to 2012.

They found that the “sell in May” strategy generated 6.9% outperformance in U.S. stocks. The average outperformance across the global markets was 9.7%. They concluded that the effect is enduring and not a fluke, and could be profitably applied through investing strategies.

Jacobsen followed up with additional research that showed the “sell in May” strategy had statistically significant outperformance in 108 of 109 active stock markets in the world.

The chart below shows the vast differences between the “sell in May” strategy and buy-and-hold investing going back to 1693. 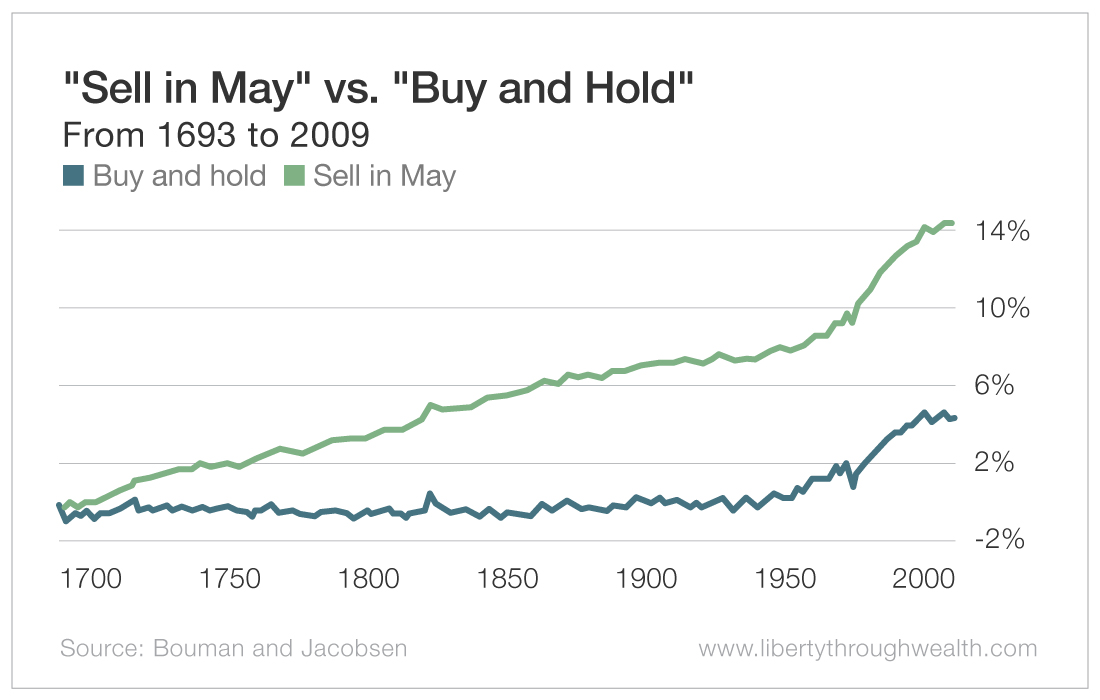 So how can you apply these insights to your own investing?

I don’t recommend that you clear out your investment portfolio every May and reinvest every November. (These studies did not account for the impact of taxes, which can eat up potential gains quite quickly.)

But you can use your awareness of this market anomaly to manage your psychology and time your investments.

Knowing that September tends to be a rough month will allow you to keep the market’s mood swings in perspective. And understanding the “sell in May” effect should give you confidence to increase your investments this time of the year.

How to Know When to Sell Your Stocks