An unexpected attack on a U.S. ally disrupts the global economy.

A proxy war between nuclear powers ensues and sets markets on edge.

The conflict and resulting energy crisis exacerbate already high and rising inflation in the U.S. And the Federal Reserve has to make some difficult choices about how to respond.

Yes, that’s a snapshot of the last few weeks of our global macroeconomic environment.

But it also describes the conditions of the early 1970s.

In the earlier era, a coalition of Arab countries launched a surprise attack on Israel in an attempt to reclaim the Israeli-occupied Sinai Peninsula. The conflict was known as the 1973 Arab-Israeli War and the Yom Kippur War, among other names. The Soviet Union backed the Arabs. The U.S. backed Israel.

Six Arab members of OPEC then declared an embargo on Israel’s allies – and on the U.S. in particular – quadrupling the price of oil.

It was, according to a history by the Federal Reserve, “a perfect economic storm” – an oil shock in the middle of an inflationary spiral. And rising oil prices have the double-barrel economic impact of making inflation worse while slowing growth. (This can all be seen in the chart below.) 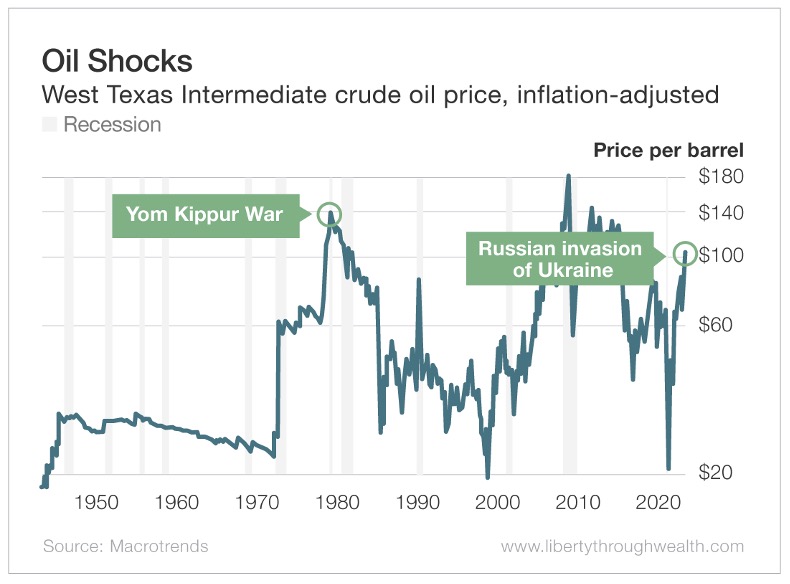 The result in the 1970s was what we now call stagflation – a nasty brew of high inflation, high unemployment and stagnant-to-negative economic growth.

The question today, of course, is… will it be different this time, or will it be a reprise of That ’70s Show?

Of course, no two time periods are exactly the same.

There were other important factors in the early 1970s that contributed to the stagflation that would soon arrive and drive unemployment above 7%, inflation above 12% and economic growth negative.

President Richard Nixon had recently taken the U.S. off the gold standard. Because of the central position of the dollar in the world economy, the entire globe was still reeling from the decision.

In fact, it took years for central bankers to figure out how to avoid the inflation that can come with floating currencies.

And economies back then were much more oil-dependent.

The energy intensity of the U.S. economy – how much energy each dollar of GDP requires – has dropped by half since 1983, according to the Energy Information Administration.

So when the price of oil rises these days – as it has this year from $78 to $102 per barrel – it has a smaller impact on the overall economy.

Better yet, in 2020 the U.S. began to export slightly more oil than it imports.

That could always reverse depending on production and consumption patterns, but in general, that means the country is largely energy independent. That will dull the impact of Russian manipulations of oil and natural gas supplies.

And finally, central bankers learned a lot from the 1970s (we hope!).

In response to the 1973 oil shock, the Fed initially lowered interest rates, which sent inflation higher. Today that decision is widely considered to have been a mistake, one the current Fed is determined not to repeat.

Still, the current Russian misadventure in Ukraine could go many ways, from a palace coup in the Kremlin (we can only hope) to a protracted occupation of Ukraine that isolates Russia and keeps oil prices elevated for years. If the latter scenario happens, economies will eventually slow in response and inflation will set in for the long term.

For the moment, however, the U.S. looks to be in a much better position than it was in the early 1970s, and certainly in better shape than our European allies.

And while stock prices were down in the first quarter of 2022, over the longer term, the odds of making money in the U.S. stock market are pretty darn good.

The Looming Collapse of Cathie Wood and Ark...

Are You an Investor or a Speculator?