If You Didn’t Invest in This Fund… Celebrate

There’s no hiding from the truth: It’s been a tough year for investors.

At least you didn’t invest your money with Cathie Wood! (At least, I hope you didn’t.)

Wood’s famous (or perhaps infamous) Ark Innovation ETF (NYSE: ARKK) is down over 50% year to date. 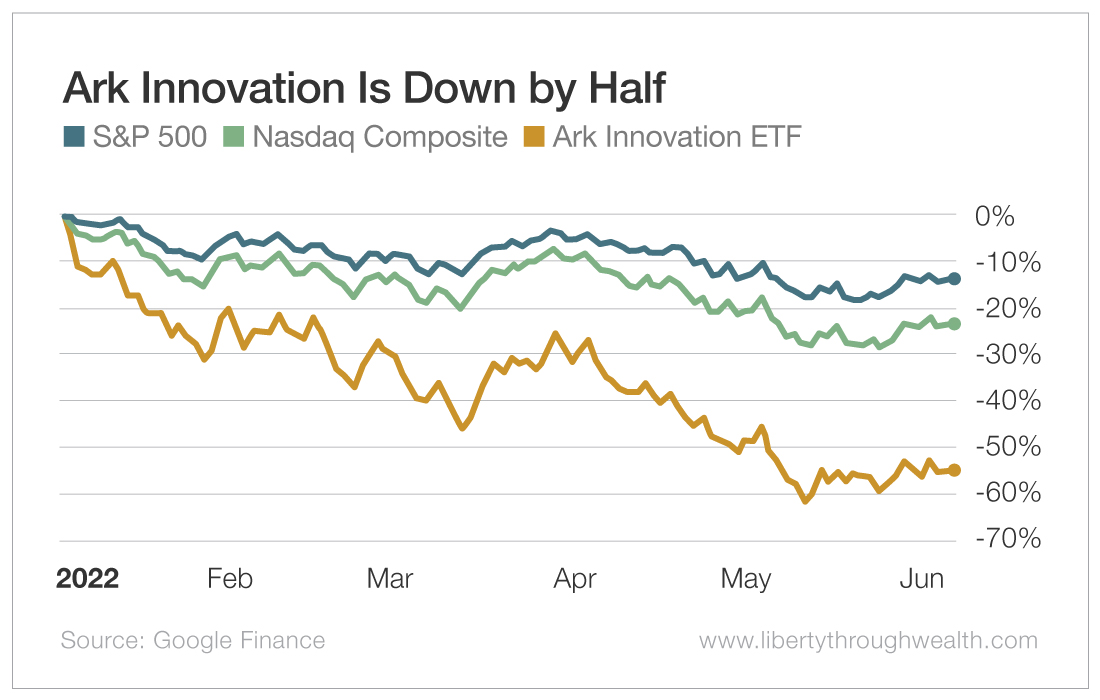 If the S&P 500 and the Nasdaq are in bear market territory, Ark Innovation is in what some market analysts call an “Ursus Magnus,” or “Daddy Bear,” market. That’s a drop of more than 50%.

The broader market has seen three such drops in the last 50 years – in 1973, 2000 and 2008. And when an Ursus Magnus occurs, it takes about four years for investors to recoup their losses.

And Ark Innovation’s performance would be a lot worse if it weren’t for the fact that Wood has a lot of devoted (myopic? cultish?) followers who apparently won’t desert her no matter how substantial their losses.

Usually a fund that performs like Ark Innovation has this year would lose most of its assets under management as disenchanted investors pulled money out of it. In fact, the performance the exchange-traded fund (ETF) has posted this year is so bad it would cause a similar-performing fund to collapse.

Yet Wood’s nine ETFs together have seen net inflows of $167 million this year, according to Bloomberg.

Perhaps that’s because Wood has more than a million Twitter followers. And on social media they refer to her as Aunt Cathie, Mamma Cathie and Money Tree.

So what’s behind Ark Innovation’s terrible underperformance this year?

Well, there are two main reasons…

Reason No. 1: Anything That Glitters

Wood went for the shiniest objects in the market, most of which soared when times were good and crashed back to earth just as dramatically when the market turned.

Here are the fund’s top five holdings and their performance year to date:

The second reason Ark Innovation is so far off this year is a failure to diversify.

Ark Innovation’s 10 largest holdings comprise almost 60% of the ETF. That’s more concentrated (and thus less diversified) than 90% of all actively managed stock funds, according to Morningstar. Almost 10% of the Ark Innovation ETF is in one stock, Tesla.

I sent the list of Ark Innovation’s top holdings to my colleague Chief Investment Strategist Alexander Green for his thoughts. Here’s his response:

The surprising thing is that even though the fund’s top five holdings are worth an average of half of what they were at the start of the year, they’re still not inexpensive or undervalued. That’s the problem with using a fund manager like Cathie Wood who thinks no price is too much to pay if she likes the long-term outlook for a company.

Alex’s approach to picking stocks is radically different from Wood’s, as you probably know.

I took a look at Alex’s “10 commandments” of stock selection, also known as his momentum checklist.

According to these rules, Wood is quite the transgressor.

The companies she’s invested in often have little or no net income, and many have posted recent losses.

They have low or no return on equity. They don’t buy back shares. Their technical factors are terrible.

And their managements are either untested or erratic (hello, Elon Musk!).

As for innovation (which Alex looks for in momentum stocks), some of Wood’s picks do at least have that. Certainly Tesla and Zoom have been innovative. As for the crypto stocks she likes… it’s debatable whether that innovation will last.

Ark Innovation’s investment theme, according to its fact sheet, is “disruptive innovation.”

So far, however, Wood has managed to disrupt a lot of otherwise comfortable retirements… and not much else.

What the Marshmallow Test Can Teach You About Accumulating Wealth