Editor’s Note: To end the vicious wage-price spiral that Matt Benjamin explains in today’s article, jobs are expected to be harder to come by soon – and they won’t pay as much.

That’s why it’s never been more imperative to prepare for your financial future. A great place to start is with Alexander Green’s Single-Stock Retirement Play.

Alex uncovered an investment opportunity with REAL cutting-edge technology that could be the key to unlocking a richer future – without needing a 9 to 5.

Should you quit your job?

Of course, I don’t know your particular situation. Nor do I offer personal advice.

But I can tell you this: Everybody seems to be doing it.

It’s even got a name: the Great Resignation.

Last November I wrote an article for The Oxford Club (if you’re a Member, you can find it here) about how millions of Americans were quitting their jobs.

The rate at which Americans were quitting reached a record 3% in November and December.

It remains elevated today at 2.8%. For most of the last decade it’s been around 2% or lower. You can see this in the chart below. 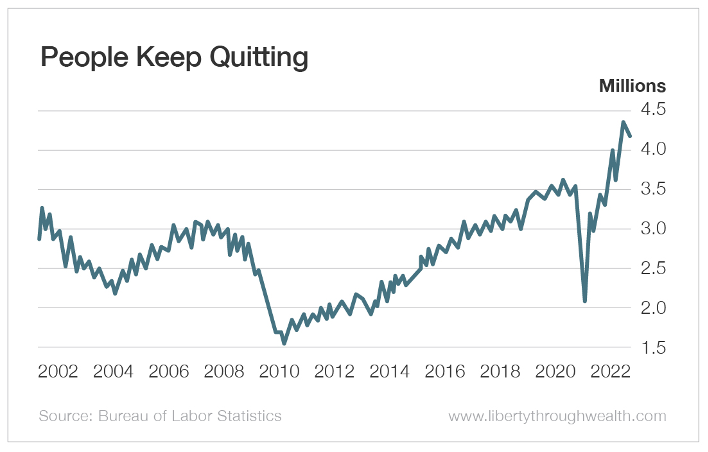 Some 20.4 million Americans quit their jobs between January and May of this year, well above the 17.1 million that quit in the same period last year.

So it looks like the number of job quitters this year will eclipse the 38 million who quit in 2021. That would set a new record.

According to Pew Research, the most cited reasons for quitting were low pay, no opportunities for advancement and feeling disrespected at work.

Many who quit went on to find new jobs, of course.

But many others didn’t. You can see that in the labor force participation rate, which is the portion of Americans ages 16 and older who are working or looking for work.

Millions of Americans completely dropped out of the labor force in the last few years – they’re not working or looking for work. That has pushed the labor force participation rate to a level not seen since 1977, before working women became the norm.

Economists would say these people are choosing leisure over income.

But there is a current of thought coursing through the media that holds that “capitalism is not a functioning economic system,” America is “an inescapable web of scams” and hard work is “a propaganda slogan.”

If that’s what you truly believe about work, then I suppose it makes sense to quit completely.

But be warned: You may regret it.

According to a recent survey by job-search platform Joblist, the Great Resignation is causing great regrets.

The survey of 15,000 people found that more than 1 in 4 job quitters regretted their decision. And more than 4 in 10 who did find a new job said it didn’t live up to their expectations.

In addition, so-called “unretirements” are on the rise, according to Joblist.

More than a quarter of those who decided during the pandemic to retire early are reentering the workforce because of money concerns. Six in 10 said they’re just looking for something to do.

Luckily for these financially strapped and/or bored Americans, there are plenty of jobs to be had – about 11.4 million open jobs at the moment, in fact. 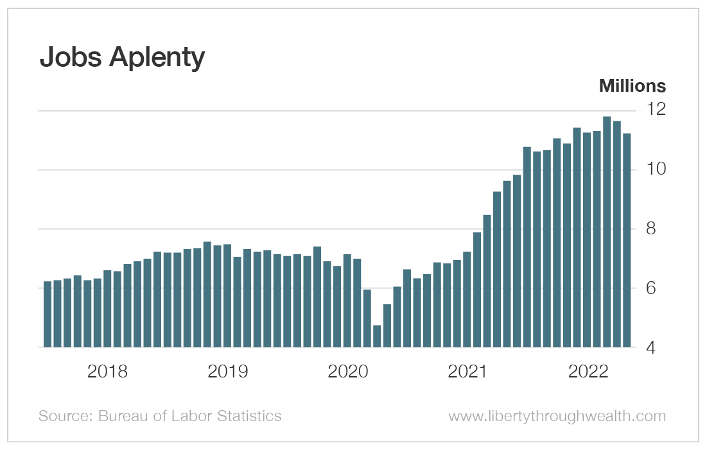 But it may not last.

One of the reasons for the elevated inflation level we’re now suffering is that employers are scrambling to fill those 11.4 million job openings, because there are only 5.9 million people looking for work at the moment.

To compete for those individuals, companies are finding they have to raise wages and provide more benefits. Average hourly earnings were up 5.1% in June, much higher than before the pandemic, when earnings were growing around 3% a year.

That’s expensive. And to offset it, companies are raising prices. This is the familiar wage-price spiral that central bankers have nightmares about.

To end that vicious cycle, the Federal Reserve has made it quite clear it’s willing to sacrifice both earnings growth and employment growth.

If the Fed can bring that 11.4 million job openings number closer to the 5.9 million Americans looking for work – or even below it – then it can break the wage-price spiral.

That means, however, that jobs will be harder to come by, will be more competitive to land and won’t pay as much.

So “unretiring” now – before the Fed has achieved its goal – might be a very good idea.

You’re much more likely to remain employed if you already have a job.

Those who are unemployed may be left out in the cold.