David Swensen is a legend in the world of endowment investing.

If imitation is the sincerest form of flattery, Yale has flattery in spades.

Each of Yale’s academic rivals has adopted the “Yale Model” (also known as the “Endowment Model”) of investing pioneered by Swensen in the 1980s.

Moreover, the heads of the Stanford, Princeton, MIT and University of Pennsylvania endowments are each headed by former Swensen deputies.

They’re all hoping some of Yale’s magic will rub off on them.

You might be wondering whether Yale’s experience is relevant to your own investment portfolio.

The short answer is yes.

But not in the ways you may first think…

A fundamental insight of MPT is that asset allocation explains more than 90% of a portfolio’s investment returns. (There is some debate as to whether the percentage is really that high.)

By investing in a range of asset classes far beyond traditional U.S. stocks and bonds, you can construct a portfolio for higher returns at lower risk.

(This is the insight behind The Oxford Communiqué’s Gone Fishin’ Portfolio.)

Swensen took this argument for diversification to an extreme.

Over the past 30 years, Yale shifted the bulk of its investments into “alternative assets,” including natural resources, venture capital, real estate and foreign stocks.

As a result, I bet the Yale endowment today looks very different from your investment portfolio.

Until June 2007, it was hard to argue with Yale’s success.

During the previous decade, the Yale endowment generated a remarkable annual return of 17.8% percent. 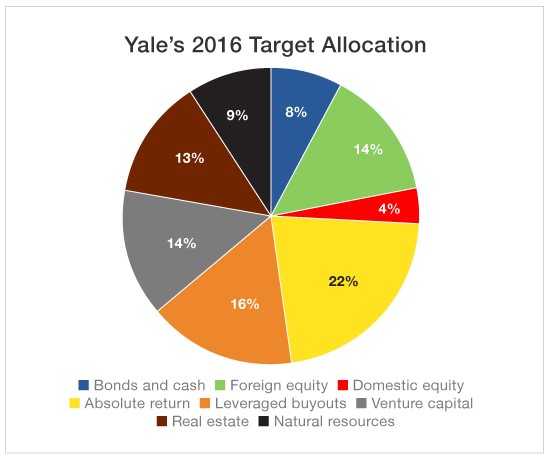 That trailed the S&P 500’s average 7.3% annual return over the same period.

Yale would have been better off investing its endowment in a low-cost Vanguard index fund.

So the question arises…

Is the Yale Model busted?

I don’t think so.

The Yale endowment didn’t lag the U.S. stock market because diversification was no longer working…

It lagged because Swensen actively bet against U.S. stocks.

Swensen’s negative view of U.S. stocks isn’t a recent one.

Yale has been reducing its investment in U.S. stocks for a long time…

That means a whopping 96% of Yale’s endowment is invested in assets other than U.S. stocks.

The conclusion is clear…

Swensen’s bet against U.S. stocks over the past decade proved to be a big mistake.

That’s because the U.S. stock market was among the top-performing stock markets in the world during that period.

Swensen’s reluctance to invest in U.S. stocks doesn’t surprise me.

After all, one of Swensen’s friends and colleagues is Nobel Prize-winning economist and Yale professor Robert Shiller. (Swensen regularly lectures to Shiller’s introductory investment class.)

And as I’ve previously written, Shiller has been warning for a long time that U.S. stocks are overvalued.

Shiller does not sit on the investment committee of the Yale endowment. But there’s little doubt Shiller’s view of the U.S. stock market influenced Swensen.

I have two takeaways for you today.

First, Yale’s low allocation in U.S. stocks over the past decade is an embarrassing misstep, one that may have cost the university billions in lost profits.

Second, this misstep doesn’t mean that Swensen won’t be right… one day.

Still, the next time you are tempted to sell all of your U.S. stocks because you believe the market has topped…

Remember that even the best investment minds on the planet can’t time the market.

I have long-term core holdings in the U.S. stock market that I don’t ever intend to sell. And they constitute a big chunk of my net worth.

Yes, it is tempting to time the market.

But no, not even investment legends like David Swensen can do it…

And neither should you.

The End of a Bull Market Doesn’t Feel Like This

How to Beat the Worst Inflation in 40...