What has been will be again,
what has been done will be done again;
there is nothing new under the sun.

I have a confession to make.

I can run all the Monte Carlo, or probability, simulations on endless streams of data using the latest tools of quantitative finance…

But I still can’t tell you what the market will do tomorrow.

Nevertheless, there is one thing I can count on.

This one thing reflects an eternal truth about the markets.

And that truth is this…

All financial markets boom… and eventually go bust. This boom-bust cycle is as an ironclad law of finance.

Once you understand this – and realize that you can make money both on the way up and on the way down – you’ll have a rare edge in your investing psychology.

And today you can exploit that edge by investing in the right exchange-traded funds (ETFs) at the right time.

You probably know that investing in tech stocks isn’t for the faint of heart. Massive price swings are par for the course.

When we’re in a bull market where stocks go up, it’s a good thing. Few things are more pleasurable than watching your bets on Netflix and Amazon hit new highs day after day.

The danger is this kind of stair-step rise makes it easy to forget that stocks that climb the stairs in a bull market can also jump out the window in a bear market.

Tech stocks are a textbook example of a boom. Today, the tech sector dominates global stock markets like never before.

According to a Research Affiliates study cited in the Financial Times, at the start of 2018, the seven biggest publicly traded companies in the world by market cap were all tech firms – Alphabet (i.e., Google), Apple, Microsoft, Facebook, Amazon, Tencent and Alibaba.

That kind of concentration in a single sector is unprecedented. Even at the peak of the last tech boom, only four of the top seven companies by market cap were in tech.

The tech sector is partying harder than it did in 1999.

The FAANG stocks – Facebook, Amazon, Apple, Netflix and Google – have been the engine behind the S&P 500’s gains since the start of 2015. 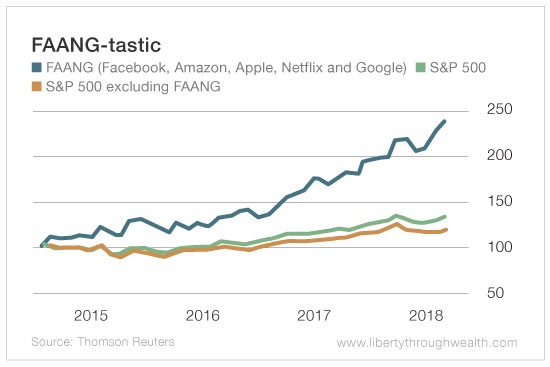 Netflix has doubled in the past six months. And all but Apple hit record highs on June 20.

You may think the sway this narrow group of stocks has held in the market is unusual, but it’s not.

Hendrik Bessembinder of Arizona State University points out that a mere 4% of U.S. stocks are the source of all U.S. stock market gains since 1926.

Just five stocks (Apple, Exxon Mobil, General Electric, IBM and Microsoft) accounted for one-tenth of all the wealth created for shareholders between 1926 and 2016.

Does this mean that you should invest solely in FAANG stocks?

After all, today’s winners may not be tomorrow’s.

General Electric – one of the “big five” wealth creators in the U.S. stock market – just got ejected from the Dow Jones Industrial Average.

In August 2000, General Electric had a market cap of $601 billion. Today, it trades at less than one-fifth that level.

I believe the same fate awaits some of the FAANG stocks. I’ve seen this play out before.

In the mid-1990s, Cisco, Dell, Intel and Microsoft were the “four horsemen” of tech because of their unquestioned tech market dominance.

In 1999, analysts expected Cisco to be the world’s first trillion-dollar company.

In 2007, PetroChina briefly surpassed the $1 trillion level in the midst of the mania for China stocks.

Today, both Cisco and PetroChina boast market caps of $198 billion – down 64% and 80%, respectively, from their actual peaks.

So how can you best profit from your understanding of the boom-bust cycle in your own investing?

I recommend you keep a sharp eye on changing trends in the markets. And once you identify a strong trend, ride that trend until it turns.

Today, the boom is in FAANG stocks.

Now, I don’t know precisely when the FAANG boom will go bust. All I know is that one day it will.

The good news is – unlike when the internet bubble burst – today there are a wide array of ETFs that allow you to profit from both the boom… and the inevitable bust.

I’m not ready to call the end of the tech boom just quite yet.

But I am preparing for it.

What I’m Doing With My Money Now (Part Two)

You Can’t Get Seriously Rich… Unless You Understand This