If you can thank one person for the incredible four-decade bull market in U.S. stocks and bonds that started in 1982, it should be former Federal Reserve Chairman Paul Volcker, who died on Sunday, December 8, at the age of 92.

George Stigler, Nobel Prize-winning economist from the University of Chicago, once said, “All great economists are tall.” (He made two exceptions: the tall John Kenneth Galbraith and the short Milton Friedman.)

Tall (6-foot-7-inch) Volcker – who served as Fed chairman from 1979 to 1987 – was a towering figure who, even today, casts a long shadow on the value of the dollar and our standard of living.

The Victory Over Inflation

Price inflation hasn’t been the same since Volcker came into power. He took over in the summer of 1979, when consumer price inflation was rising at a 12% to 14% clip and investors were fleeing stocks and bonds in favor of alternative “inflation hedges” – gold, silver, Swiss francs and real estate.

Books like Harry Browne’s You Can Profit From a Monetary Crisis and Howard Ruff’s How to Prosper During the Coming Bad Years were all the rage. Businessweek ran the cover story “The Death of Equities.” It was the gold bugs’ day in the sun.

After we went off the gold standard in 1971, the hard money advocates were convinced that runaway inflation was inevitable without the discipline of gold.

When President Jimmy Carter appointed Volcker as Fed chairman, Volcker was blunt in telling the president, “You have to understand, if you appoint me, I favor a tighter policy than that fellow,” referring to Bill Miller, the Fed chairman at the time. Inflation’s days were numbered.

Volcker was a practical financial analyst on Wall Street with no particular ideology. He was no gold bug. He simply believed that the stock and bond markets would provide a monetary discipline without gold. Traders hated inflation and supported Volcker’s plans to end the inflationary psychology.

Volcker was determined to make the Fed independent of politics, and he was vilified in the early 1980s under President Ronald Reagan for allowing interest rates to rise to 21% in his determination to end the threat of rising inflation once and for all. But Reagan stuck with him and reappointed Volcker.

I was at the New Orleans Investment Conference right after Reagan was elected and was shocked that Jim Blanchard and other hard money advocates refused to believe that the inflationary ’70s were over. They were no fans of Reagan and were convinced that Volcker’s tight money policy would cause a crash and lead to even more inflation.

I was one of the few speakers in New Orleans who thought a new paradigm shift was about to take place and that inflation would end under the Reagan administration. In fact, my first promotion for my budding newsletter, Forecasts & Strategies, was titled “The Financial Shock of 1981: Reaganomics Will Work! Sell Your Gold and Silver, and Buy Stocks and Bonds.”

The promotion failed. Nobody believed me. I was excommunicated by the gold bugs.

It took a couple of years, but independent Volcker’s tight money policy won the war and Reaganomics was a success. 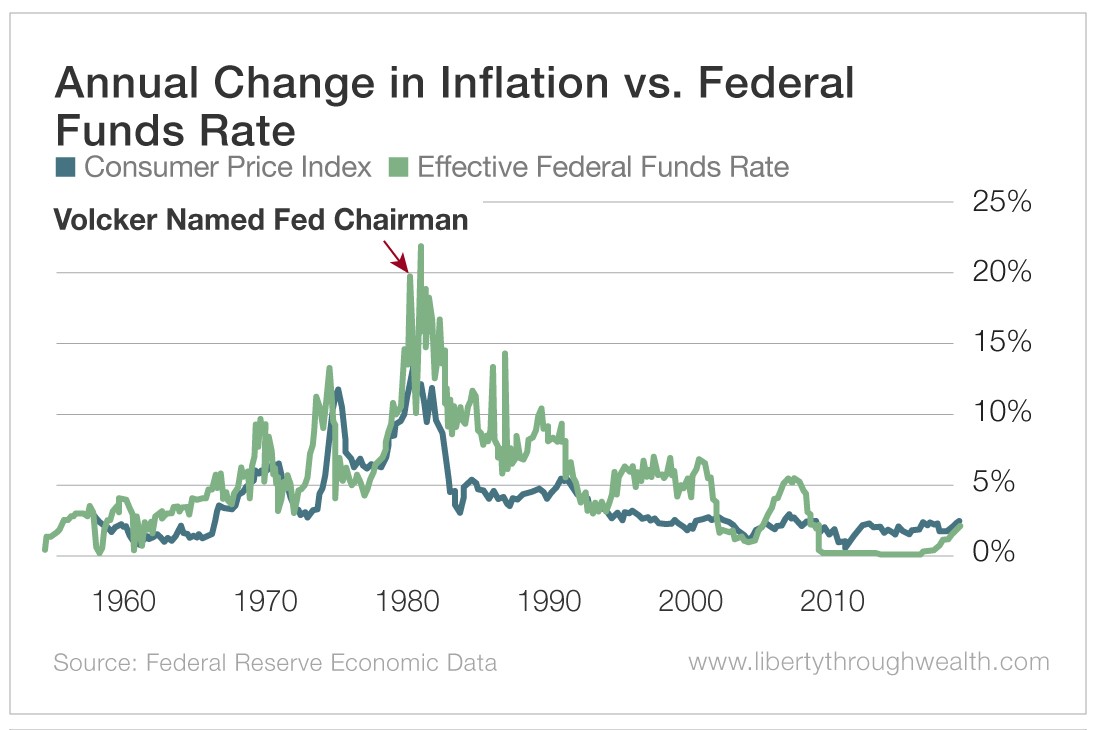 Gold and silver tanked, while Wall Street took off, and, despite several severe bear markets, went on to hit one high after another, culminating in the “mother of all bull markets.”

Who would have thought that after bottoming in the early 1980s, the bond market would rise 15 times higher and stocks 50 times?

Since Volcker left office in the summer of 1987, inflation has remained in the low single digits. We continue to live in a disinflationary environment, which is ideal for the traditional financial markets.

I met Volcker a few years ago at an American Economic Association event. He stood tall, and I thanked him for his service to our country.

Today, Fed Chairman Jay Powell is worried that inflation is too low, and the central bank has struggled to achieve its goal of 2% annual inflation.

In his memoir, Keeping At It: The Quest for Sound Money and Good Government, Volcker wrote that 2% inflation targeting is “idiotic.” The former chairman rightly rejects the current Fed’s inflation targeting goal and the “puzzling” Keynesian rationale that “a little inflation is a good thing.”

So if you are a rich person today, you can thank Volcker. We plan to dedicate a room to him at next year’s FreedomFest. He deserves it.

Why We Should Not Raise Taxes on the...