An automaker’s shares recently soared 60% within a month.

Its chief executive had just reaffirmed its strategy to trounce its rivals by unveiling a new range of electric vehicles (EVs).

Or was it the CEO of yet another startup entering the sizzling EV market?

No, it was Volkswagen CEO Herbert Diess.

He had just revealed plans for 30 EVs across the company’s Volkswagen, Audi, Porsche, Seat and Skoda brands.

Volkswagen even issued a press release stating that it intended to adopt the name “Voltswagen” for its coming fleet of EVs in the U.S. (It was an April Fools’ Day joke.)

All this activity has unsettled Tesla bulls’ faith.

Investors are already voting with their money.

Since the start of the year, VW’s share price has outperformed Tesla’s by almost 75%. 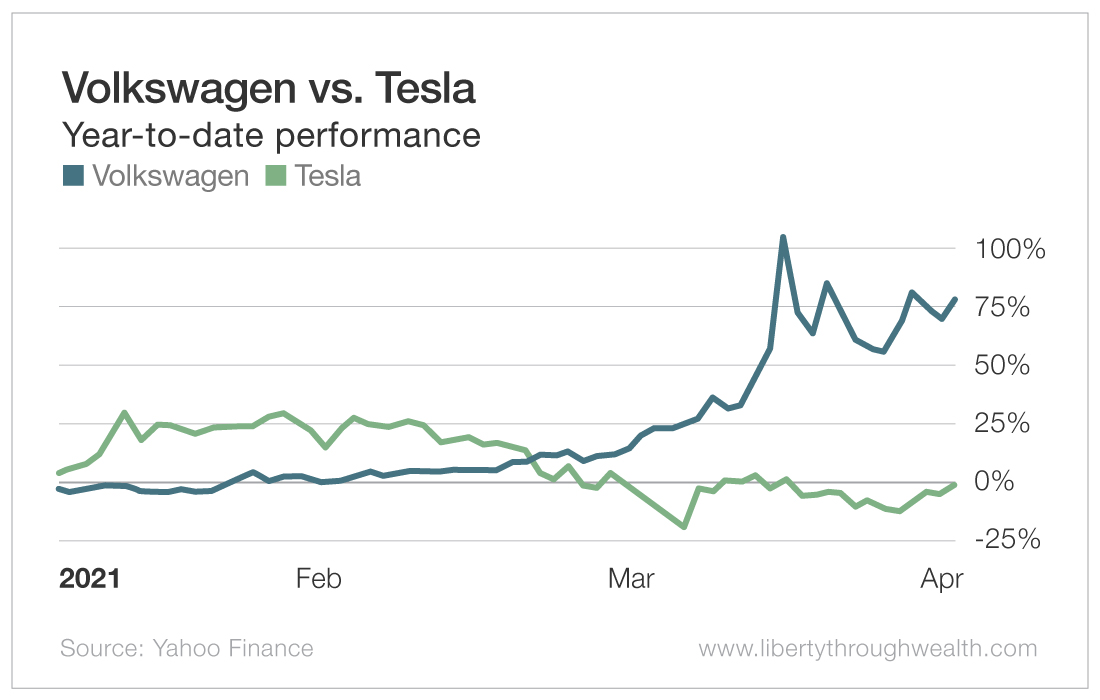 Tesla is not the only disruptive stock coming under fire.

Recently, another stock soared as customers signed up for its streaming service in unprecedented numbers.

And no, it’s NOT Netflix.

This chart of Disney’s share price versus Netflix’s over the past six months tells you just about all you need to know. 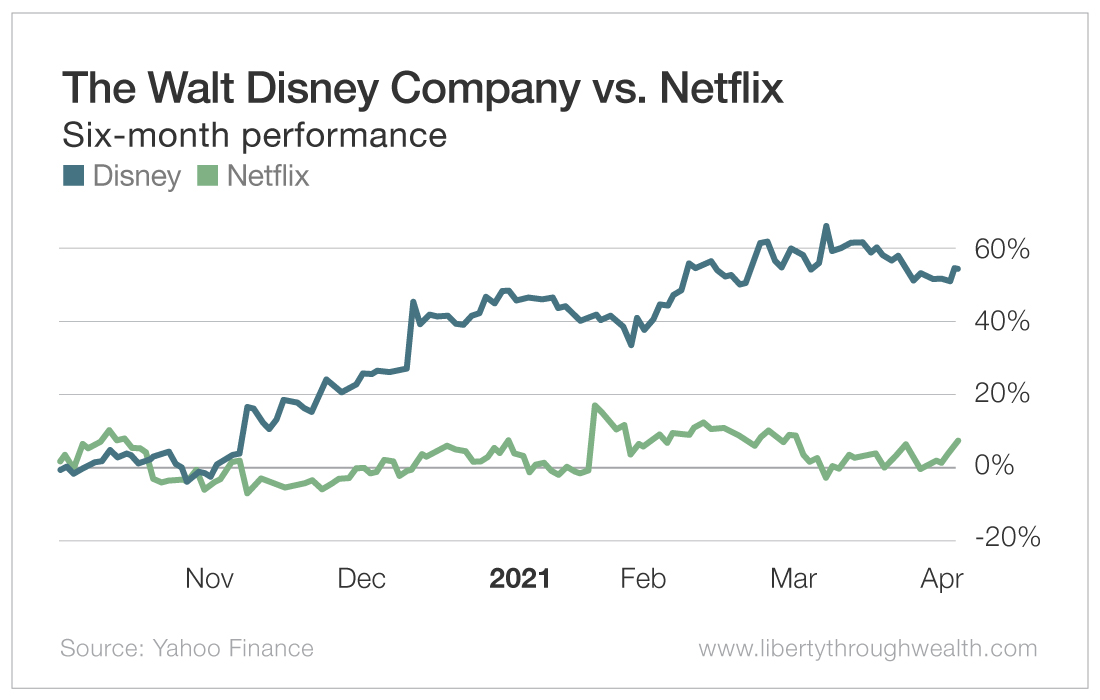 Once it got going, Disney’s streaming service, Disney+, raced past 100 million subscribers in one-tenth of the time it took Netflix.

The Power of Second Movers

No one likes being in second place. No one remembers the silver medalist in the Olympics. No one celebrates the losing team in the Super Bowl.

This obsession with being first is translated in the business world as the “first-mover advantage.”

Much like in the world of sports, investors think that “first” equals “best.”

Yet there are two significant benefits to being a latecomer in a market.

First, second movers learn from the pioneers and are less likely to repeat their mistakes. After all, pioneers are the ones with the arrows in their backs. Imitation is easier, more efficient and less costly than complex innovation.

Also, second movers typically have deep pockets. They can spend whatever it takes to break into the market.

Take the example of EVs.

Sure, Tesla may still retain a first mover’s technological edge. But extended battery life and superfast charging across all EV manufacturers or even self-driving software is not a matter of “if” but “when.”

Meanwhile, legacy automakers have the advantage of enormous production capacity, a collection of trusted brands and a robust distribution network.

VW, Ford and GM already have the factories and infrastructure ready to meet EV demand. No new “Gigafactories” required.

The same logic applies to Disney and streaming.

Netflix showed that you need blockbuster new content with lots of buzz around it to attract subscribers. A handful of successful series made consumers flock to Netflix.

By the time Disney launched its streaming business in late 2019, analysts had dismissed its efforts as “too little, too late.”

Yet they failed to recognize the enormous legacy value of Disney’s content.

Once it deployed the Star Wars, Marvel and Pixar brands, along with its massive library of films and cartoons, Disney’s content turned out to have a lot more blockbusters than Netflix’s does.

And just 16 months after the launch of Disney+, Netflix’s lead in the TV streaming market is starting to fray.

But many are based on the false narrative that tech startups will always win by establishing a permanent competitive advantage.

Yet Amazon’s, Google’s and Apple’s successes in their sectors are the exception rather than the rule. Hundreds of rivals had fallen by the wayside before they cemented their positions.

But it is often up to established players to perfect them.

When that becomes apparent, investors abandon disrupters without mercy.

If the future is anything like the past, most of today’s disrupter stars will come crashing down to earth.

With many disruptive stocks already trading 30% below their peaks, that process may have already started.

So consider yourself warned.

2021 may turn out to be the year red-hot disrupter stocks get disrupted. 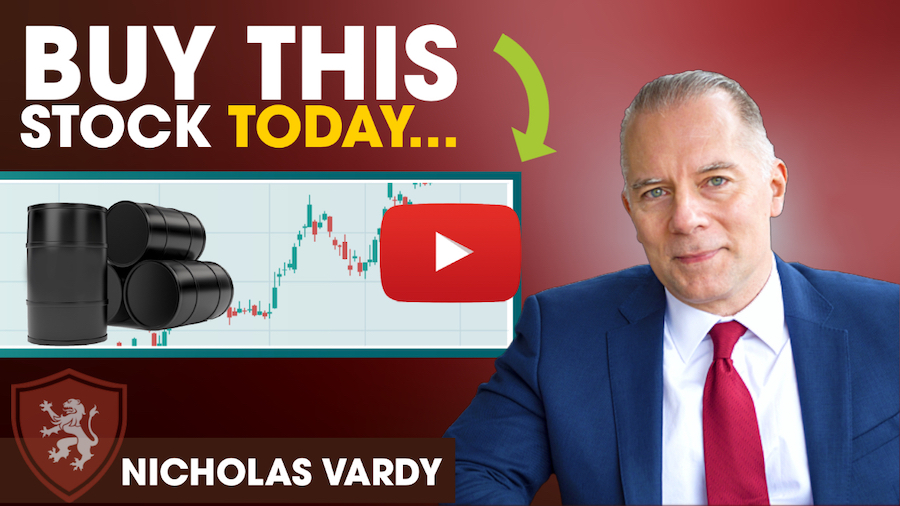 The Stock Market Has Stalled… What Investors Should...