Yes, it’s understandable to want to get ahead of Wall Street. But joining the army of “apes” isn’t the way to do it…

In today’s article, Nicholas Vardy explains how the downfall of AMC Entertainment can teach us how to become better investors… but only if we’re willing to listen.

Besides, there are plenty of more reliable ways to stick it to Wall Street.

In fact, Alexander Green sat down with longtime Oxford Club Member Bill O’Reilly to discuss how the average Joe can legally rig the stock market – without falling victim to the hype of meme stocks.

In this video, Alex shares what could be the single biggest advantage you can use to beat out Wall Street time and time again.

In your heart of hearts, you knew it couldn’t last.

You bought into meme stocks like AMC Entertainment (NYSE: AMC) on the promise that they would “go to the moon.”

You embraced your newfound identity as an “ape.”

You were a proud soldier in the army of Reddit apes who would swarm on a widely shorted stock, force its price up and stick it to Wall Street’s largest hedge funds.

You relished the dopamine hits you got from watching the live streams of newly minted stock market experts like Meet Kevin on YouTube.

You told yourself that this time was different.

“Buy the dip!” became your mantra.

You trolled anyone who disagreed with you with a dismissive “OK, Boomer!” as you mocked the gerontocracy of Warren Buffett and Charlie Munger.

You may be a rock star at your day job…

But as far as trading is concerned, you have a lot to learn.

Apes will go down in the annals of financial history as some of the most colorful players in the post-COVID-19 bull market of 2020.

Apes viewed themselves as revolutionaries.

They were the self-proclaimed great unwashed investors railing against the titans of Wall Street: Yes, we may be dumb simians, but we’re sure as heck smarter than all the Harvard MBAs on Wall Street.

Apes relished in their newfound power.

Sitting at their keyboards in their basements in Columbus, Ohio, they thought they’d replace Wall Street’s new masters of the universe, ensconced on Columbus Circle in Manhattan.

But instead the apes became like Icarus – a figure in Greek mythology who challenged the gods, flew too close to the sun, and with the heat melting his wax wings, tumbled back to Earth.

Like any mass movement, the apes even had their self-proclaimed “ape father”- AMC CEO Adam Aron.

The apes idolized and trusted Aron, much like the followers of, say, Che Guevarra trusted their leader.

Well, now that AMC stock has plummeted from a high of $72 to its current level of $11.20, the apes are crestfallen.

And how has the ape father fared in comparison?

It turns out that over the past year, Aron sold $40 million worth of AMC stock, most recently at roughly $40 per share.

And here’s a fun fact: It also turns out that Aron is a graduate of Harvard College and Harvard Business School.

Those Harvard guys suckered you again. (Don’t say I didn’t warn you.)

But much like a hormone-drenched, snarky teenager… you were both too conceited and too inexperienced….

You didn’t even know what you didn’t know.

As Warren Buffett famously said, “Only when the tide goes out do you discover who’s been swimming naked.”

Compare the performance of Berkshire Hathaway (NYSE: BRK-B) with that of AMC over the past six months. 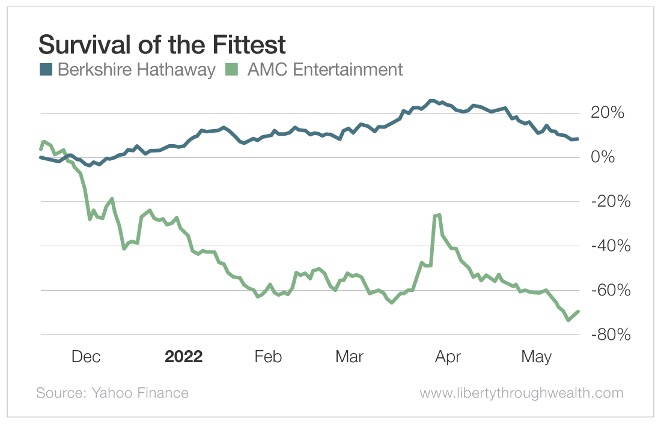 Pigs (and Apes) Get Slaughtered

As an ape, you have a lot to learn about trading.

So here’s your first lesson.

There’s a lot more to the trading game than “hodling” (holding on for dear life) AMC forever.

Playing the financial markets doesn’t turn you into a skilled trader any more than playing on the same golf course as Tiger Woods would turn you into a world-class golfer.

But if misery loves company, take solace in the fact that the Michael Jordans of the investment world make mistakes as well.

Stanley Druckenmiller – the lead portfolio manager of George Soros’ Quantum Group of Funds for 12 years – has one of the most remarkable track records of all time.

Yet even he suffered massive losses after the dot-com bust.

The first thing I heard when I got in the business… was bulls make money, bears make money and pigs get slaughtered. I’m here to tell you I was a pig. And I strongly believe the only way to make long-term returns in our business that are superior is by being a pig.

So Druckenmiller went on a buying spree and bet $6 billion on tech stocks at the height of the dot-com boom.

No prizes for guessing how that all ended…

When asked about what he learned, Druckenmiller said…

I bought $6 billion worth of tech stocks, and in six weeks I had lost $3 billion in that one play. You asked me what I learned. I didn’t learn anything. I already knew that I wasn’t supposed to do that. I was just an emotional basket case and I couldn’t help myself. So maybe I learned not to do it again, but I already knew that.

So take it from me… yes, another Harvard grad, but one who has your interests at heart…

If you were dumb enough to get caught up in meme stocks, you’re probably also young enough to have what 67-year-old Adam Aron’s $40 million could never buy him: time.

And with time, you can make up for your youthful folly.

So dump your AMC stock.

Save 10% of your income, this month and every month.

And for your homework, contemplate the wisdom of this quote from Jim Rohn:

If someone hands you a million dollars, best you become a millionaire, or you won’t get to keep the money.

The Reason You’ll Never Be a Billionaire